There’s something about films that are inspired by true events that really seem to speak to me.  It’s one thing when you’re watching a film and you know it’s a work of fiction, but it’s an entirely different experience all together when you watch a film like Argo and think to yourself “this actually happened!” I had that same sort of reaction when watching The King’s Speech.  Admittedly I was six years old when the events of Argo unfolded, so to say that I have no recollection of what happened is spot on.  And, had it not been for this movie, I’d have probably never in a million years been tempted to do some reading and find out about what happened.  But that’s why we have Hollywood. We like to be entertained, right?  And what better way to entertain us than by telling us a tale of ingenuity, bravery and a little bit of luck.  I often complain that Hollywood only churns out remakes, television shows and films based off comic books.  Well this time they’ve gone and done it and wouldn’t you know it – it worked.  Argo is a bona fide great movie and a front runner for Best Picture of the year.  Let’s dive in.

In Iran in November, 1979 some extremists storm the U.S. Embassy and overtake it.  They take 52 members hostage but have let six men and women escape.  These are the six key players in the film and they find refuge with the Canadian Embassy under the watchful eye of Ken Taylor (Victor Garber).  This crisis is being scoured in the United States as these six men and women will surely be killed if they’re caught.  What to do?  CIA specialist Tony Mendez (Ben Affleck) comes up with the idea of making a “fake” movie that’s looking for locations.  Their plan is to sell this to the Iranians, go in and then leave with a “Canadian” film crew that’s composed of the six missing men and women.  It’s so crazy it just might work.  The down side is that if it doesn’t work, not only will the hostages be executed, but the already tense relations between Iran and the United States will be compromised.  Let’s make a movie!

If you’ve ever seen Wag the Dog, a fictionalized version of what happened here, then that’s about as much as I can compare it to in terms of what they were trying to do.  The story was based on true events so as I said in my opening paragraph – this happened.  What filmmaker Ben Affleck has managed to do here is craft a taut, tense film that’s relentless from beginning to end.  There’s an all-start ensemble cast of characters with John Goodman, Victor Garber, Kyle Chandler, Alan Arkin and Bryan Cranston just to name a few.  Everything is authentic down to the belt buckles and hairstyles, to boot.  There are too many negative images of the FBI and CIA out there, so it’s nice and refreshing to know that, even at one particular moment in time, our Government was capable of a plan like this and managed to make it work.  As for the film, well it doesn’t get much better as the 120 minutes will fly by before you know it.  Highly Recommended.

Granted, there’s a bit more footage in this extended cut, but the video quality is the exact same as the previous Blu-ray. Though there is certainly some mixed media in the film, Argo looks just as good as any new to Blu-ray movie should.  The 2.40:1 AVC HD image contains a mix of handheld footage, some archival footage (a very young Tom Brokaw and Ted Koppel are seen on TV) and we get a feel for what it was like in the late 70’s.  Detail is second to none, we can make out the individual hairs in Affleck’s beard.  Contrast and black levels work off one another as it makes for a very solid image.  The overall tone of the Iran sequence seems to be a bit cold and corporate and some of the interior scenes seem to be a bit on the cooked side.  Still, Argo looks as good as I was expecting.  It’s a solid transfer.

This is a missed opportunity for a 4K title. The same DTS HD Master Audio track is included and no Dolby Atmos mix has been made for the film. Still, like the video, the audio quality is exactly the same as the previous cut. What could have probably sounded good in mono sounds amazingly better in a DTS HD Master Audio sound mix.  The opening scene features an angry Iranian mob, there are explosions, gun shots and everything in between.  The LFE get some extra play here which really helps the soundtrack earn its keep.  Dialogue is at the heart of this movie, though, and it’s never compromised – not once.  The front channels take the burden of the mix and with surrounds chiming in to help out, it’s a very strong and solid mix from opening credits to closing.  A fine effort from Warner here.

Once again we’re put in a conundrum – do you want features or a better picture? This movie came out in Blu-ray with the features below (that were just ported over to this Ultra HD set) and then an extended cut of the movie with a new disc of supplements was produced. Those are nowhere to be seen in this edition. So, again, if having the supplements is important – this isn’t the version for you. If you want to see the movie looking its best, then this one is for you.

It’s been a few years since I last saw this movie and it got better, much better, upon second viewing. It was the right choice for Best Picture and showed Affleck’s prowess as both an actor and director.  This 4K version is a bit of a double edged sword, though. There are other supplements that exist, but they weren’t included in this edition. However if picture quality is important to you, then it doesn’t get better than this. The choice is yours. 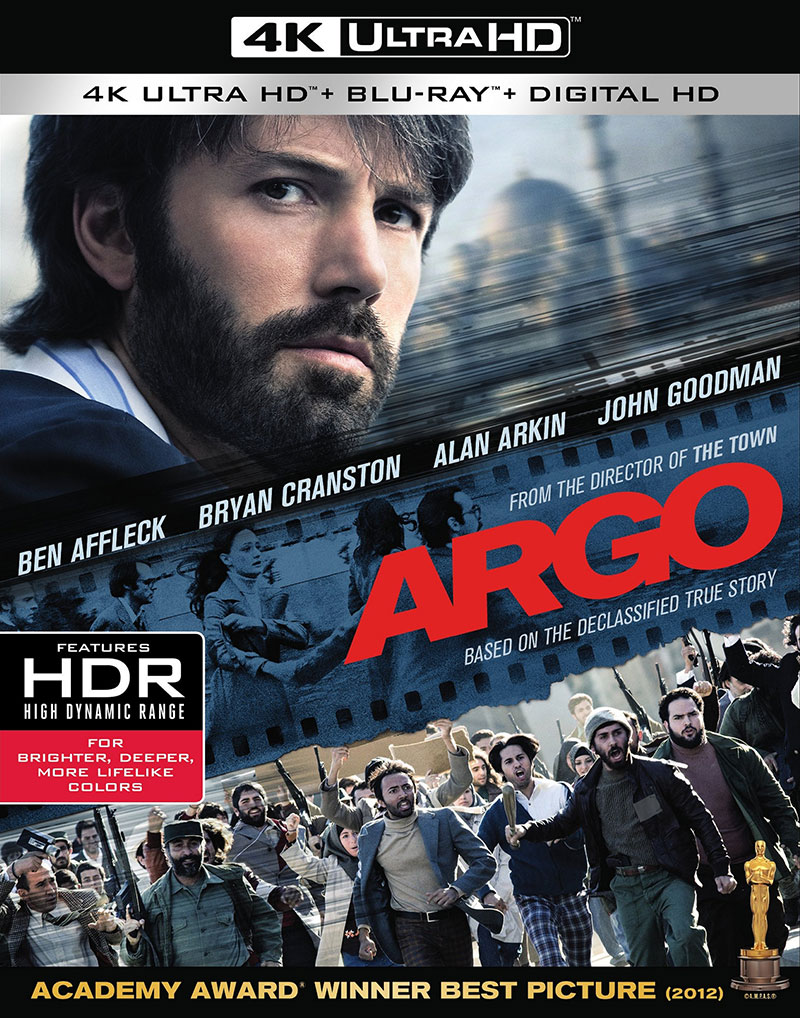