Ant-Man and the Wasp (Blu-ray)

I think the only thing I could compare the Marvel Cinematic Universe to is James Bond. Yes, the two might not have a lot in common other than attractive women, grandiose car chases and a ton of cool gadgets (you listening Tony Stark?), but there’s something for everyone. Now over a decade old, the MCU (as it will be referred to from here out) continues to stampede through the box office like the Hulk through a brick wall. 2018 has given us three MCU films: Black Panther, Avengers: Infinity War and how the sequel to 2015’s Ant-Man; the aptly-titled Ant-Man and the Wasp. Back to my “there’s something for everyone…” comment and by that I mean if you like your superhero films to be sarcastic and light-hearted you’ll likely be drawn to Spider-Man (the new one) or these Ant-Man films. Like things a bit darker then give Captain America and Black Panther a look.  How about violent and foul-mouthed – Deadpool is waiting for you (yes, I know that it’s not technically a part of the MCU…yet, but you get the idea). Nevertheless our big/small insect heroes have a new film, so let’s get to it, shall we?

We pick up where Ant-Man left off, sort of. Dr. Hank Pym (Michael Douglas) has finally come to the realization that his wife Janet (Michelle Pfeiffer), might actually still be alive three decades after her disappearance into the Quantum Realm. Add to that, he believes that he knows a way in which to bring her back. Hope (Evangeline Lilly) is excited by the news, but things take a turn when a black market dealer (Walter Goggins) attempts to steal the technology in their mobile lab. Moreover, a mysterious figure known as the Ghost (Hannah John-Kamen), who has the power to pass through solid objects at will, is in on the action. Hank and Hope call upon Scott Lang (Paul Rudd) to once again don the ant suit to help rescue Janet. The only problem being, of course, is that he’s under house arrest. What’s a superhero to do?

Peyton Reed returns as the director and it’s as if they knew what everything from the first film worked. It’s all back. The wise-cracking Luis (Michael Peña) and his two cohorts steal every scene they’re in and inject the film with plenty of upbeat humor. There’s the obvious on-screen chemistry between Evangeline Lilly and Paul Rudd – the two work together well. Though the mystique of the first film is no longer there, this one seems to take up the slack and lets the viewer sit back and enjoy the ride. There are plenty of action-filled sequences and if you’re a fan of San Francisco, then you’re in for a visual treat. I’ll never look at Lombard Street the same way again! This a fitting entry to the MCU and it’s served its purpose well. Though other events are referenced in the film (which might tie into Avengers: Infinity War and Ant-Man’s absence), this is about as stand-alone as it gets. Nevertheless, if a fun, action-packed film is what you’re after then look no further.

As if we would expect anything less than stellar? Disney (Marvel’s) film comes to the Blu-ray format looking simply divine. The 2.39:1 AVC HD image is glorious from start to end and with the amount of CGI, there were plenty of opportunities for errors. Thankfully none of those persist. Though it’s not reviewed as such, the film was shot (and wisely uses) a good amount of 3D. We can really get a sense of space when seeing a microscopic ant (or wasp) shrunken down to the size of an atom. Visuals for some of the older actors are even done well: Lawrence Fishburne, Michael Douglas and Michelle Pfeiffer’s younger selves look spot on accurate. Textures, clarity and colors seem warm and well-balanced as well. There’s nothing to complain about here, folks; it looks the part.

The sound mixes on some of the Disney (Marvel) titles has led some of the audiophiles to complain (who would have thought?). Thankfully I didn’t really notice anything that would raise an eyebrow when watching the film. The DTS HD Master Audio soundtrack has about every trick in the bag ranging from sharp, crisp dialogue to the sound of a car chase down Lombard Street. Surrounds are active for the duration of the film, LFE play a very important role (even in the micro-universe). It all sounds amazing. There may be some issues with other titles, but not this one.

If you’ve seen all of the Marvel Cinematic Universe films, and judging by the box offices of these – you have, then why stop now? If the drama of some of the more recent Avengers films has gotten to you, sit back, relax and enjoy the ride that is Ant-Man and the Wasp. 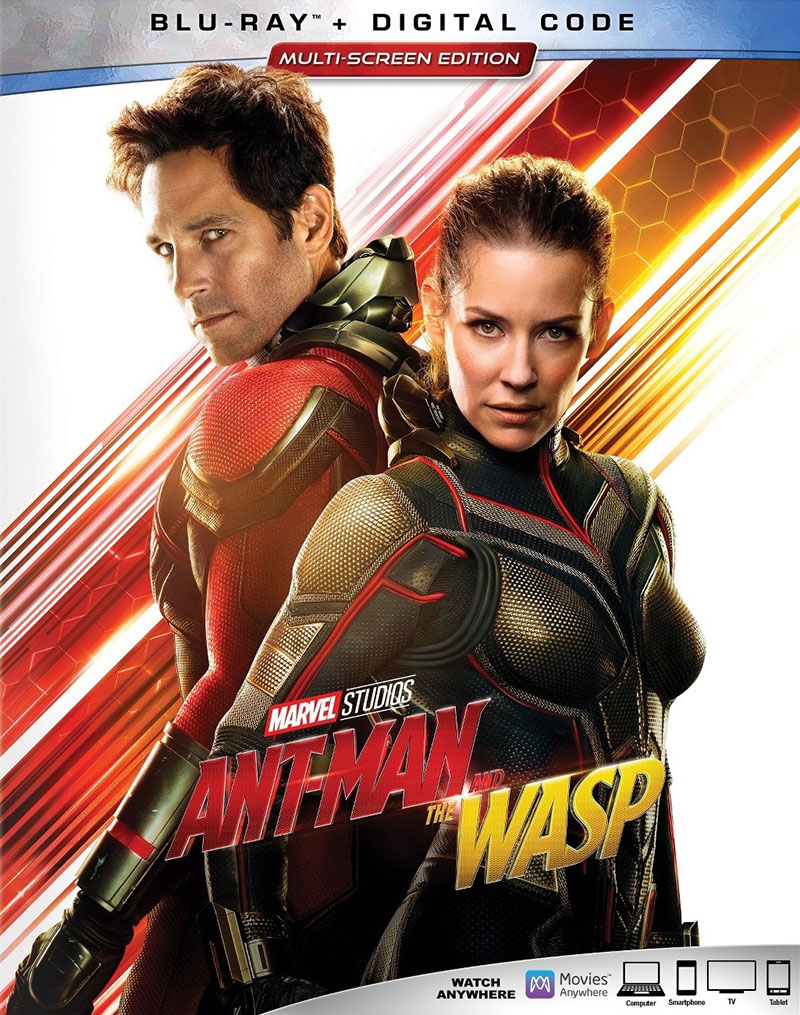