Another Day of Life (Blu-ray)

Shout!Factory, through their GKIDS line, has released the critically acclaimed foreign film Another Day of Life. I was interested in seeing the film because it is an animated film that focuses on a civil war that took place in Angola, an issue I knew nothing about. This sounded like something I would enjoy because I loved the excellent animated film Waltz with Bashir that focused on an Israeli and Palestinian conflict. Another Day of Life was a passion project for the filmmakers that took a full ten years to complete. The film fuses together documentary footage and interviews with survivors of the conflict along with motion captured animation that looks like a graphic novel come to life. The film is based on a book by journalist Ryszard “Ricardo” Kapuściński.

In Angola in 1975, a civil war between the Communist backed MPLA and capitalist FMLA erupts as the Portuguese abandon control of the country. Ricardo Kapuściński works for the Polish press in Luanda. Despite his friend’s warnings, he decides to go to the Southern Front to meet the man who holds the South – Farrusco. His friend Arturo decides to join him on his quest. Arturo has positioned himself on the side of the MPLA and is pro socialism. Along the way Ricardo meets with reporter Luis Alberto and also meets revolutionary fighter Carlota. Unbelievably, due to the information he acquires Ricardo will eventually need to choose a side in the conflict and also make a moral decision that will potentially affect the outcome of the war.

Another Day of Life is a really interesting film. As an American, it is interesting to watch a film where the side that is portrayed as deserving of praise is aligned with socialism. My mind is not fully wired that way, so I had to dissociate my own political leanings to enjoy the film. Once I got past that issue, the film was tremendously interesting. I knew basically nothing about the conflict itself, so it was fun learning more about it while also being engaged by the story as it played out. The melding of the animation and documentary footage works surprisingly well and helps the film to really connect. The graphic novel animation style is also largely satisfying. I enjoyed the film overall.

Shout!Factory presents Another Day of Life with an AVC encoded 1080p transfer in 2.39:1. The video presentation looks superb. Fine detail is excellent, and colors and clarity are exceptional. The style of the film comes through great in high definition. The film is visually exciting thanks to its mixture of documentary footage and animation. I did not notice any issues that take away from the film.

Another Day of Life features both an excellent English DTS-HD MA 5.1 surround track. The film has a decent amount of war scenes that benefit from the surround effects. The track has solid depth and is pretty immersive.

Another Day of Life is a really enjoyable film. Similar to Waltz with Bashir, the film highlights a conflict that is not commonly thought about in America. The film cuts in documentary footage with animation and the effect is surprisingly effective. I enjoyed watching the film and learning more about the conflict in Angola. 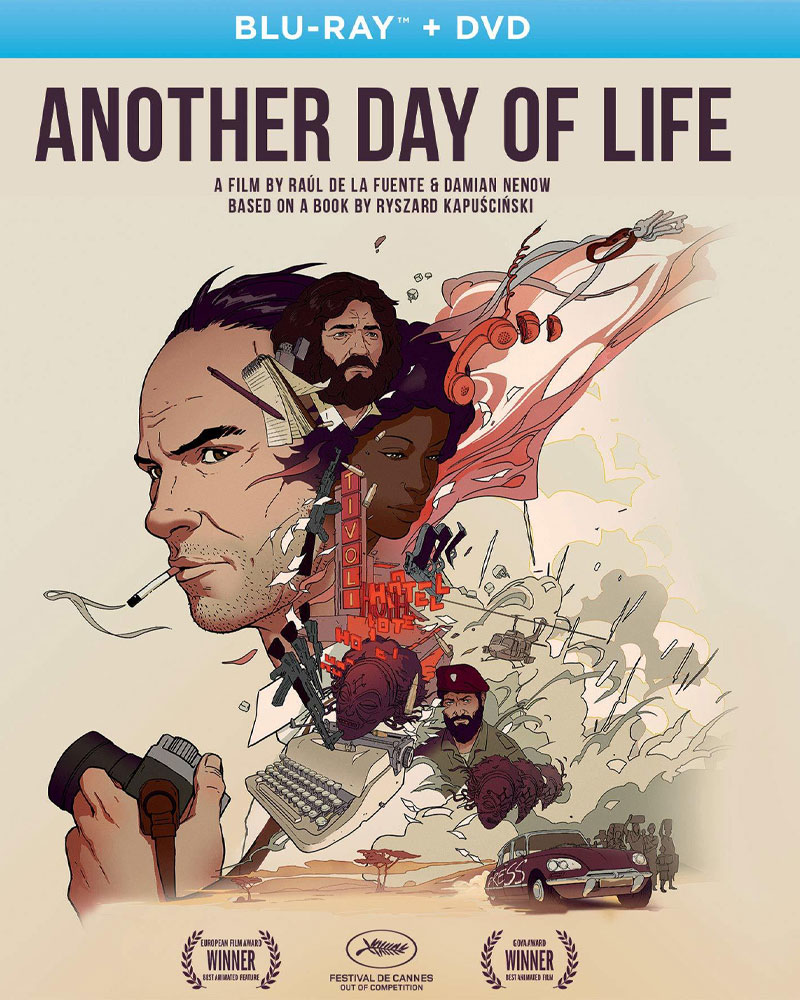