I’ll admit that I can hardly keep up with horror films these days. I also admit that I don’t want to nor do I even try. They’re really a dime a dozen these days, and between the countless sequels, prequels and spinoffs, it’s a task my fragile brain cares little try and do. Normally I’d wait till I was asked to review a film like Annabelle: Creation to watch it at all, but the solid reviews got me pumped, and I saw it theatrically. I skipped out on the last couple of entries in this series (this and the Conjuring series which this is somewhat connected to) largely because of a serious disinterest. I will say that while Creation is hardly a cinematic breakthrough, it still provides enough thrills to warrant a viewing. Sure, much of the film relies heavily on loud music and jump scares, but if it does in fact scare me, I feel it’s done its job. Let’s take a look at the film, shall we?

Acting as a prequel to another prequel, Annabelle, here we go back to 1943 where the film begins. We meet a dollmaker named Samuel Mullins (Anthony LaPaglia) his wife Ester (Miranda Otto) and their daughter Annabelle (Samara Lee). As they’re leaving church one day, they get a flat tire. As Samuel is fixing it, tragedy strikes as his daughter is struck by a fast approaching vehicle and is killed. We then cut to 12 years later where a nun and six girls are coming to Samuel’s home to reside there. We spend some early time getting to know the girls and Sister Charlotte (Stephanie Sigman) before the terror starts. Although they’re warned not to go into Annabelle’s room, one of the girls does anyway and encounters the possessed doll. You can probably guess what happens next, but indeed havoc is unleashed. We also see little of Samuel’s wife as she’s virtually a recluse at this point. This adds a bit of tension to the proceedings.

I usually shun off prequels of any kind as I feel they’re mostly unnecessary, but this one at least has a few tricks up its sleeve. By also going back to an earlier era, it adds to the isolation as the girls are kept away from modern technology, namely those pesky cellphones. Indeed cellphones have almost become a lethal injection to most modern horror films. I’ve certainly seen more frightening horror films, but Creation still gets the job done. It probably could’ve used some editing as it’s a bit long. Still, there are enough scares to warrant a viewing. I don’t think this is essential viewing, but fans of this series will want to check it out.

Warner presents Annabelle: Creation in a nice-looking (and very dark) 2.40:1 AVC HD encode. Being a new to the format film, we essentially know what to expect and this one delivers on the technical levels. Did I mention this film was dark? The image doesn’t seem conflicted in the least offering up a steady, well-defined image that doesn’t suffer in the least. Black levels are strong and consistent, the detail is top notch. Let’s face it, we know what to expect with a new movie on disc and this exceeds all expectations.

The included Dolby Atmos soundtrack is also tough to top. Being a horror movie, we can expect plenty of jump scares and the sound mix plays an important part in the film itself. A wide and expansive track makes use of plenty of directional effects, the LFE get involved and dialogue is crystal clear. It’s a strong mix that’s sure to please and certainly worthy of the Atmos moniker.

While not the most original (or even necessary) horror flick lately, Annabelle: Creation still mostly satisfies. The slower pace might turn off some viewers, but I found it refreshing and it helps draw us into the world. I think a lot of the young actresses here also did a capable job as well. Rent it. 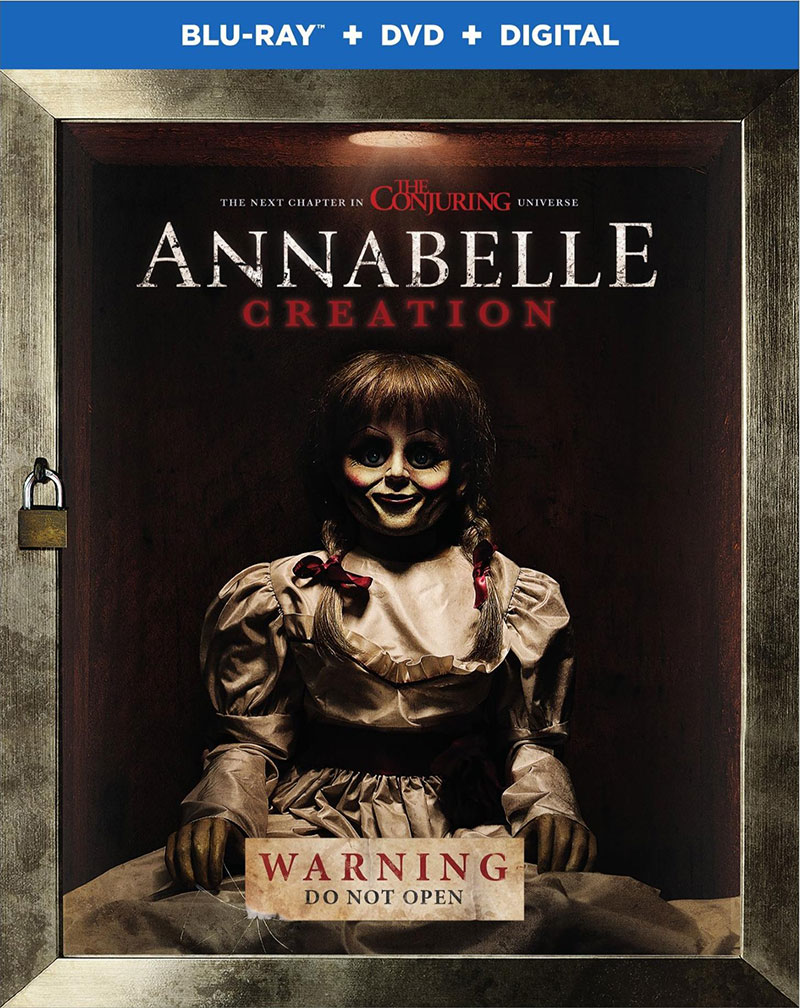