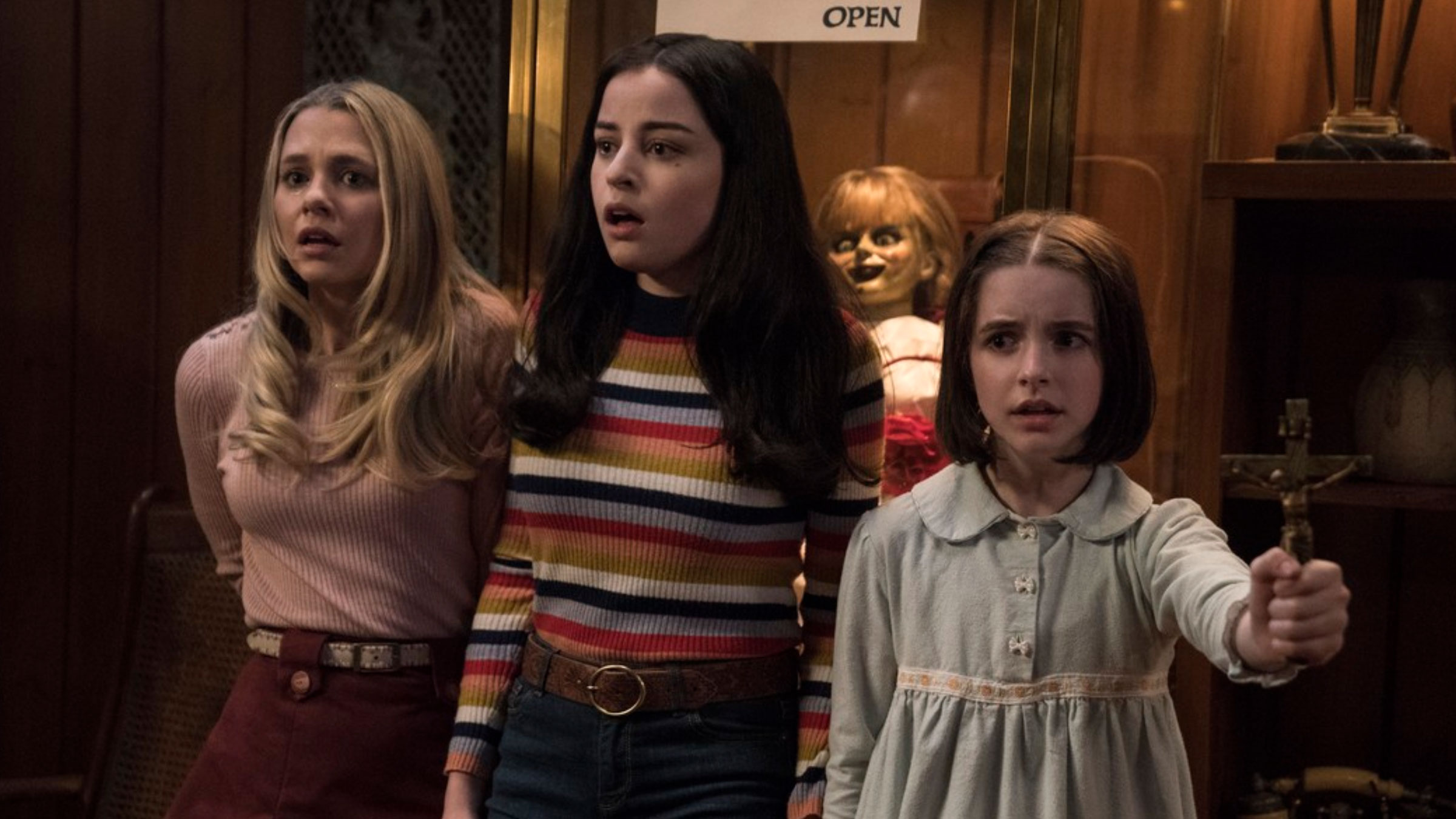 Who would have thought that with the release of 2013’s The Conjuring, it would inspire a new horror universe? I seem to write something akin to this statement with each new installment. I suppose when (or if) they stop making these films, that will no longer be a problem? But, like it or not, here we are with yet another chapter in the creepiest doll ever to appear in film – Annabelle. And while we’re on the subject of the Conjuring Universe I will say that the films are so varied, there’s actually a particular order you’re supposed to watch them in. Well, maybe not “supposed” to, but if continuity is important, then there is. Though it becomes a moot point since they keep releasing films that jump back and forwards in time. Fear not, I’ll post the “proposed” viewing order at the bottom. For the time being, let’s see what our creepy doll has been up to this time.

Warning: Minor spoilers for The Conjuring Universe might present themselves below. Read on at your own risk.

We find real-life-demonologists Ed (Patrick Wilson) and Lorraine (Vera Farmiga) as they lock away Annabelle in their basement. All is well and good, but we flash forward a year and now the Warren’s have to go out of town and leave their daughter, Judy (Mckenna Grace) in the trusting hands of babysitter Mary Ellen (Madison Iseman). What could possibly go wrong? Mary Ellen’s BFF, Daniela (Katie Sarife) shows up and wishes to see the basement so that she might try to communicate with her dead father. In the process she unleashes hell (literally) in the form of Annabelle. And, of course, we have the requisite boyfriend in Bob (Michael Cimino) show up just in time to be hunted by a werewolf.

When you’ve got the world’s creepiest doll locked in a glass case in a basement of demonologists, it’s best to steer clear. It’s also not wise to unlock said case, especially when there’s a sign reading “Warning Under No Circumstances DO NOT OPEN!”. But then again, there’s are rules in horror movies and the characters never follow them.

Annabelle Comes Home serves as a rather obscure entry in the Conjuring Universe, but I found it a bit more entertaining than the last two I’ve seen: The Nun and The Curse of La Llorona. It was also nice to see Patrick Wilson and Vera Farmiga in an Annabelle movie as they’d previously been limited to The Conjuring films. Given that some pretty insignificant objects/characters have been given their own film, it wouldn’t surprise me to see one of the “creatures” from this film get their own movie. But, as it stands, Annabelle Comes Home does serve its purpose and puts a new twist on the “scared babysitter at home” genre.

And, as promised, here is the “correct” chronological viewing order for The Conjuring Universe.

One thing that this movie, along with all those listed above, have in common is the color palette (or lack thereof). Most every horror movie won’t be bursting with a rainbow of colors and this is certainly no exception. The entire film takes place within the Warren’s home (or just outside) and most of it at night. That said, I found the 2.40:1 AVC HD encode attractive enough and contrast and black levels were right on the mark. Detail, as expected, wasn’t an issue. I was even able to make out some of the “artifacts” found in the basement. It’s a testament to the transfer when you can see individual bits of metal or read text on books in the background. Being a new to the format film, we know what to expect and this delivers.

I was a bit surprised to find a Dolby Atmos soundtrack on this Blu-ray, but Warner (New Line) is one of the few studios that does this fairly routinely. Most others make the viewer buy the 4K for the “full” effect. For that, we thank you. And most of The Conjuring Universe films do have their fair share of “jump scares” that fill the viewing area with all sorts of noise. Vocals, as expected, aren’t compromised in the least. A robust aura fills the air, especially during the film’s final act. This one serves its purpose and does it well.

The Conjuring Universe continues to grow and this latest installment does shed a bit of light on a few things. While I think that the momentum seems to be dying (pardon the pun), there are others that feel it’s just getting warmed up. Whatever your particular point of view, if you’ve seen all the other films – are you really going to stop now? Right. A top notch audio and video experience only sweeten the deal.