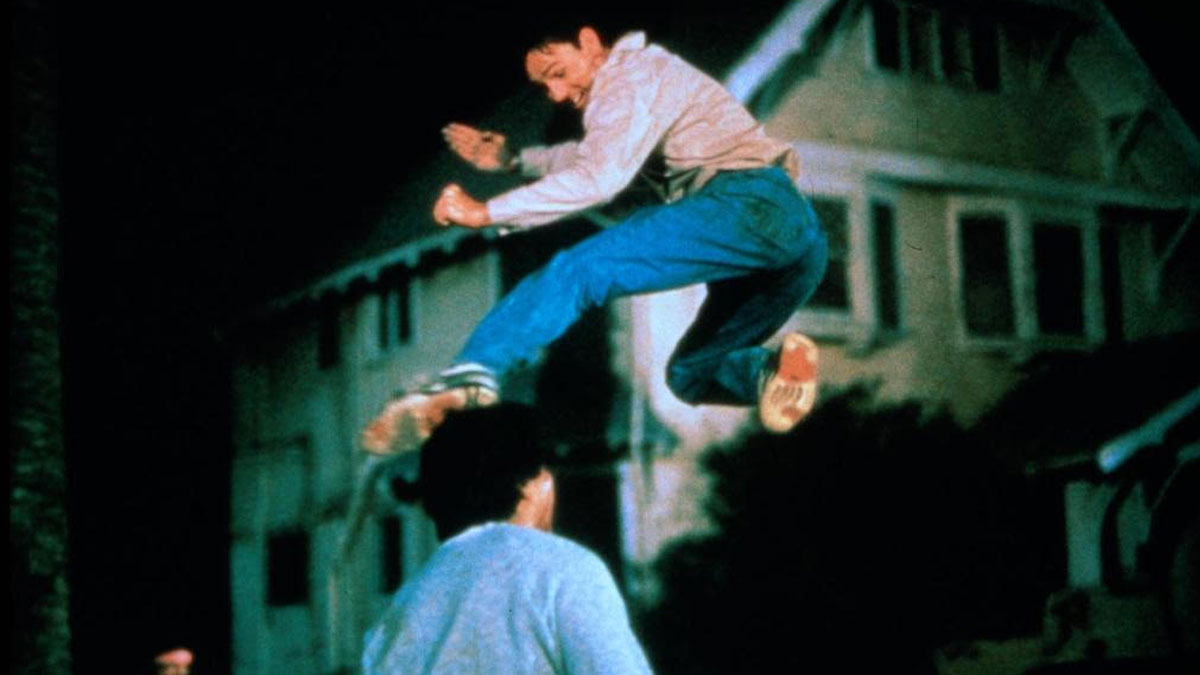 MVD Rewind Collection has already proven its capability this year at reviving classic low-budget Nineties actioners like Black Eagle and Lionheart with lovingly done collectors editions. I have been paying close attention to their releases this year because I love that genre. I was excited when I saw that they would be releasing another Eric Karson action film from 1990 called Angel Town. I had not seen the film, but all it takes is watching a trailer for the movie to know that it is a good time. The same day my copy arrived I checked it out.

In East L.A., gangs fight with one another over turf and along racial lines. In Paris, Jacques Montaigne has been accepted into grad school in California. Before he can leave, his girlfriend has sex with him in a cemetery. Arriving in Los Angeles, he is treated like a celebrity by the school for his intellectual acumen but the only housing he can find is in a rough part of town due to arriving in town a couple days late. Moving in to the house he meets his landlord – a sweet Grandmother (Lupe Amador) and her daughter Maria (Theresa Saldana.) He goes to the grad school party where he meets a professor who calls him an intellectual Neanderthal. Walking home a patron from the party, he gets in an altercation with some gang members on his way home. He quickly kicks their asses. Jacques meets the landlord’s son Martin (Frank Aragon.) Martin is being bullied by the local gangs in town – especially the Mexican gang led by Angel (Tony Valentino.) Martin refused to join their gang and they won’t move out of their house, so the gang is willing to do whatever it takes to force Martin to join. Jacques grew up on the hard streets of Paris and had a similar issue there. He turned himself into a champion kick boxer. With the help of his friend Henry (Peter Kwong,) Jacques begins to train Martin at a local gym to help him protect himself. When the gang goes over the line, a big brawl ensues that will force a final showdown between Angel’s men and Jacques.

This movie was right up my alley. If Lionheart is Street Fighter, Angel Town is Streets of Rage. If you can not turn your brain off and enjoy a cheesy action film, read no further. This film is not for you. This is not some well-written drama that reveals something great about the resilience of human beings. This is a wide-eyed kickboxing film on the streets of 1990 East L.A. This film is for the most part incredibly inept in a way that never managed to do anything but make me smile. The Mexican actors are given some of the most inane and hilariously stereotypical dialogue, but it was completely unintentional. This is one of those cases where the hearts of those involved were in the right place and they really thought they were dealing with the crime issue in L.A. in a constructive way. Keep in mind that L.A. was about to boil over in two years when Rodney King was beaten by the LAPD. It was an incredibly dangerous time in that area.

Here are a few things I enjoyed during the film:

All this and more awaits you in Angel Town, a film with much more heart than brains. If you like this sort of thing, go ahead and put it in your Amazon cart now.

MVD Rewind have provided a good-looking transfer of the film using an MPEG-4 AVC codec of a brand new 2K restoration from the original camera negatives. This transfer suffers from a couple issues that I didn’t feel affected my enjoyment at all. There is some noticeable specking and there are some color fluctuations that crop up occasionally, but given that this film was made on a small budget in 1990, I think it should be given a little bit of grace. Overall, fans of the film should be very pleased.

MVD Rewind has provided an English LPCM Mono Track for the Theatrical Cut from the original recordings. Given that this track is a mono track the sound field is pretty limited, but I didn’t notice anything that distracted from the enjoyment of the film. The music is really hilarious at times – especially the theme song by The Hot Heads. At times it is a little hard to hear what people say, but the track was pretty solid overall.

Angel Town is another great nostalgic release from MVD Rewind. I had a lot of fun watching it and think that fans of this type of movie will have just as much fun as I did. MVD have provided some excellent supplements and a good transfer of the film. If you are a fan of these types of films, I would purchase without any worries. Recommended.