It’s rare that I’ll prefer the third entry in a series like this, but that just happens to be the case with Angel has fallen. I had similar feelings with the third Hangover film in that I actually preferred that over the first two. So while rare, it can still happen with me. Should the series end here, I’d say they went out on a mostly high note. A trusted site left a review for this film that was surprisingly positive. I bring this up, because this would’ve been a film I otherwise skipped all together or covered down the road when review time came along. Instead, that good review got me to the theater. Make no mistake, Angel isn’t some modern classic, but it gets a lot of things right. Despite the overblown climax, it attempts to present the lead character Mike Banning (Gerard Butler) as more of a human this time around. That opposed to the superhero like character he’s played in the first two films. There are a lot of surprises to be found here. I’ll touch on them more in a bit, but if you’ve been with the series this far then you should definitely check out this chapter. If you never bothered or gave up after the first or second films, then do yourself a favor and see if this one can win you over.

The film begins with a big action scene where secret agents, including our hero Mike Banning (Butler) are going through training at a secret site. We learn early on that Mike isn’t feeling too great. In fact, he’s suffering from major headaches and insomnia. His doctor advises him to take it easy. Of course Banning lies about what he does for a living, but he is starting to feel the stress. Morgan Freeman returns once again as President Allan Trumball. Mike also has a big decision to make. He is the first person sought after to fill the new job of Secret Service Director. While Mike doesn’t exactly want to give up his current role, he knows that it might be inevitable. While on a fishing trip, the President sees that Mike seems exhausted and tells him to have someone else take over on his watch. An attack occurs where drones come and kill everyone except Mike and the President. While Mike is injured, he is still OK. The President is in a coma, but may recover. Unfortunately, Mike is blamed for the attack. We meet FBI Agent Helen Thompson (Jada Pinkett Smith) who tells Mike what he’s accused of and what will happen next. Mike maintains his innocence, but the President is under, so he can’t corroborate his story. While En route to the detention center, there’s an ambush which Mike manages to escape. Now a fugitive, he takes refuge where he can, with his father Clay (Nick Nolte). To say his father is off the grid would be a serious understatement. This is where the film largely succeeds in the relationship between Mike and his father who has been absent for most of his life. Nolte does a fine job and there’s emotional scenes and some much needed comic relief as well.

We can pretty much see how this will all play out, but the film kept me with it. I cared enough about the characters, the film gives us enough action, but doesn’t bury us in it. I also enjoyed seeing the more vulnerable side to the lead character. If there’s a nit to pick it’s that the film runs just a bit too long. This is mostly during the action filled climax which could’ve shaved about 10-15 minutes and been better for it. Still, there’s more than enough here to recommend. I wasn’t expecting to enjoy it as much as I did, but Angel has Fallen gets a lot right. It has what its predecessors didn’t have -a heart.

Much like its predecessors, Angel Has Fallen is presented in a 2.39:1 AVC HD image that’s darn near perfect. Yes, Gerard Butler and Morgan Freeman are a few years older, but just as expected the detail is stunning.  The beads of sweat on Gerard Butler’s face, the little scrapes and bits of blood and even the stray hairs that are out of place.  Contrast and black levels work well never leaving us with any movement or loss in the shadows.  It’s a rock solid transfer and one that’s indicative of a new to Blu-ray film.

More impressive is the Dolby Atmos soundtrack. Once it starts, it really never lets up.  The opening car wreck scene has a massive “thump” that actually jarred me out of my seat for a moment.  There are countless bullets, rockets and just about every other projectile fired in the film and with the speakers whizzing and churning about, I was dizzy from the onslaught of sound that encompassed me.  Vocals are strong and well-centered too, with Butler’s grizzly, raspy voice taking the lead.  The LFE had their fair share of work to do here and the surrounds were humming away in several scenes.  Truly this is an immersive soundtrack and one that only adds to the excitement of the film.

The third time proves to be the charm for Angel has fallen. I didn’t particularly care for the first two films, but this one kept me with it.  It gives vulnerability to the lead character and has touching scenes between he and his father as well as enough action and just enough humor to offset the more serious moments. Angel deserves a look. 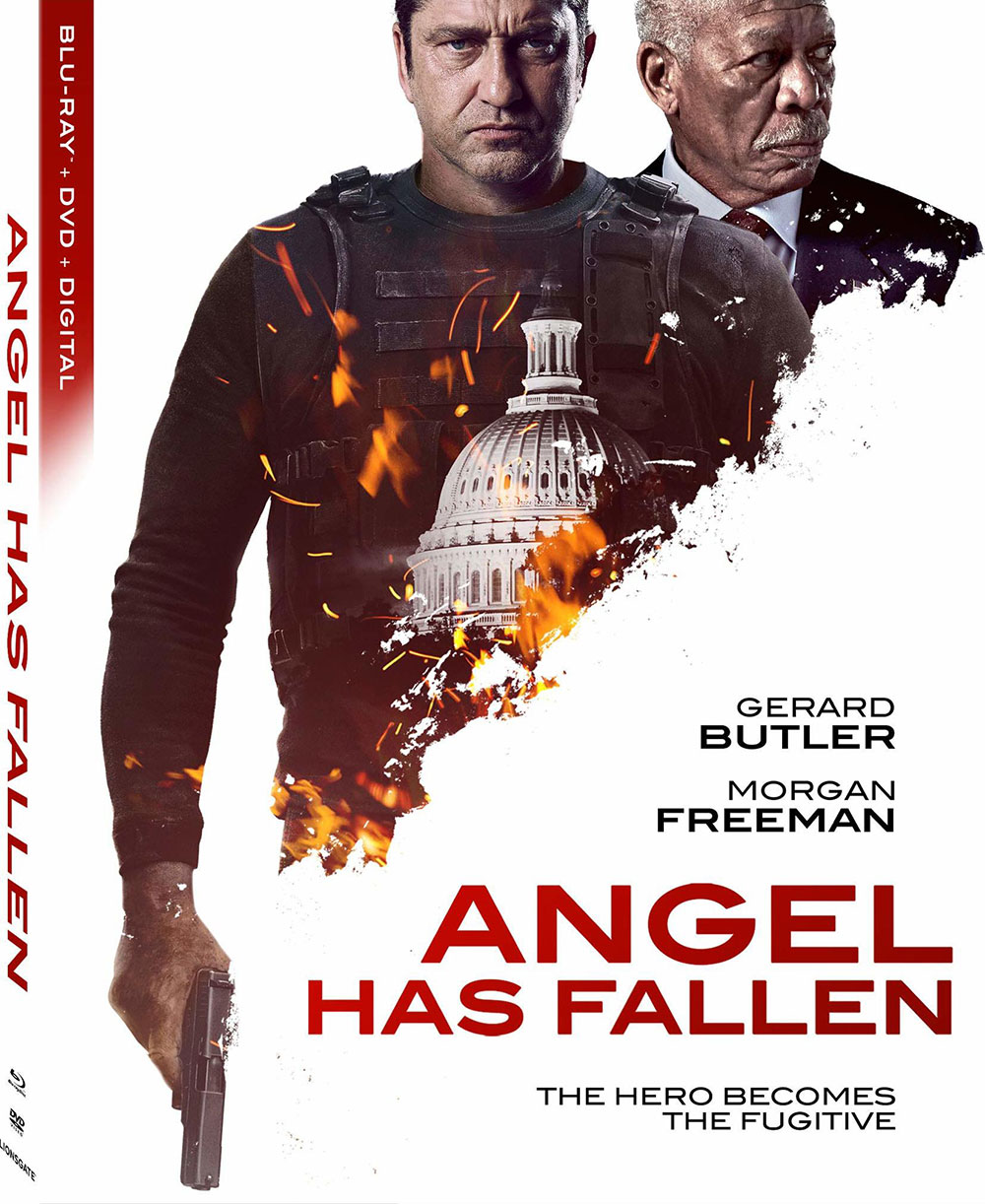