A documentary crew has been dispatched to the dangerous region of the Amazon, where it hopes to uncover a certain tribe, one hidden within the depths of the jungles. The crew includes director Terri (Jennifer Lopez), resident anthropologist Steve (Eric Stoltz), uptight host Warren (Jonathan Hyde), cameraman Danny (Ice Cube), producer Denise (Kari Wuhrer), and soundman Gary (Owen Wilson), quite a colorful assortment, to be sure. The crew goes through some spats, but remains on course and gets some terrific footage, though when they stop to assist a stranded traveler, things take a turn for the worse. The man is Paul Sarone (Jon Voight), a hunter who claims to know the location of the hidden tribe, but insists a different course needs to be taken, as opposed to the one in the crew’s plans. After he stages an “accident” that confines Steve to his bed, he starts to take over the expedition, but his intentions have nothing to do with the tribe, instead he plans to hunt a most dangerous creature. Can the crew manage to survive this ordeal, or will Sarone’s ambition wind up getting them all killed?

I can’t help but crack up whenever I think of Jon Voight’s work in Anaconda, as it ranks as one of the most over the top efforts of all time. He is able to turn in the kind of performance seen in those classic 1950s B movies, which is bad news for some audiences, but in a movie like Anaconda, I think its excellent news. His appearance is as slimy and seedy as the character’s persona, which given the role he has here, that’s pretty slimy indeed. Voight opted to use one of the worst accents I’ve heard outside of Costner in Thirteen Days, one which has elements of several dialects, but never settles on just one. He drops it and picks it up again throughout, kicking even more humor into the film’s central villain. His line delivery is flat out hilarious also, a real throwback to the days of B movie heaven.

Anaconda is presented in a 2.35:1 AVC HD image as was the Sony disc that preceded it.  The same print flaws as before remain intact, so some of the darker scenes show some grain, but aside from that, this is a great looking visual presentation. After looking at the two, I really can’t find any differences between them. This would have been a great opportunity for Mill Creek to knock it out of the park, but I guess a simple re-issue is what we get instead.

I find it hard to believe that in the days of “next generation” soundtracks like Dolby Atmos and DTS X, we still have Blu-ray’s featuring Dolby Digital 5.1 soundtracks. It’s a head-scratcher for sure. But that aside, the film doesn’t really sound that bad. Yes, it could sound better with some more depth and dimension, but when you’re watching a 80 foot snake strangle its victims, I can’t imagine that having back rear surrounds or overhead speakers will really add to the intrigue all too much. Oddly, this is the same mix found on the Superbit that was released in 2002. How’s that for nostalgia?

Over two decades since its release, Anaconda is still fun to watch. Like it or not, it put Jennifer Lopez on the map as an “A” list star and, well, there you have it. Mill Creek’s version does nothing to improve on Sony’s Blu-ray from a few years back. So if you own that version, I see no reason to pick this one up. 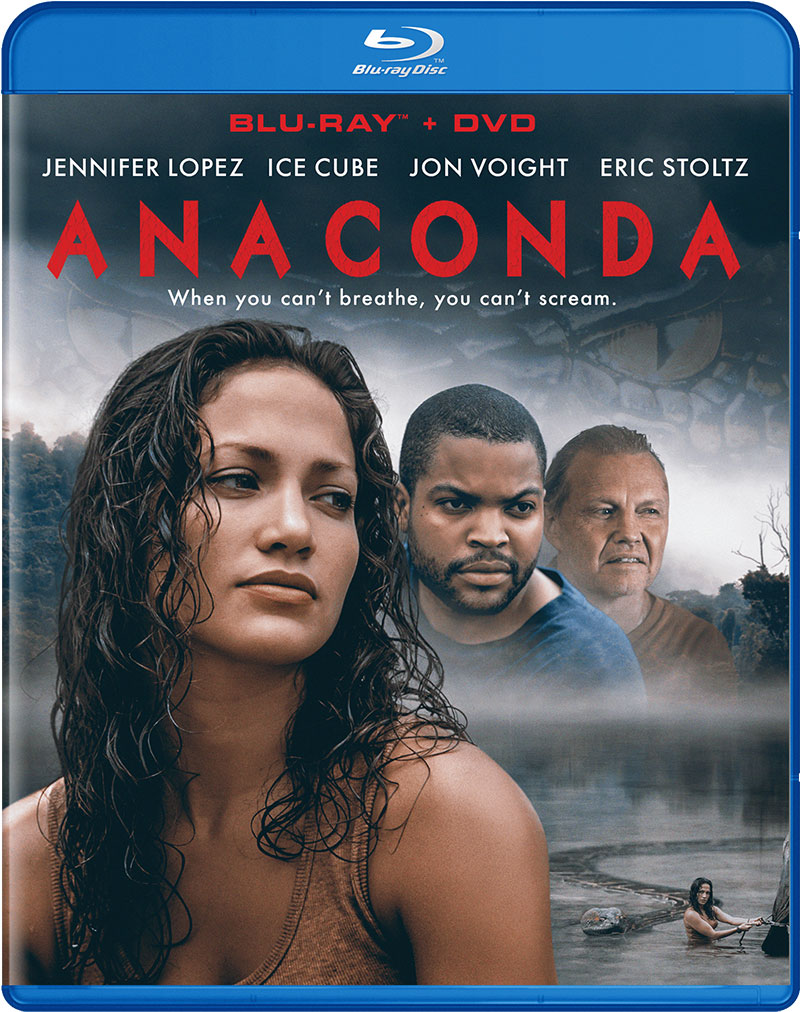