An American Werewolf in London (Blu-ray)

I remember it like it was yesterday. I was in the sixth grade and I was staying at my friend Merrick Fagan’s house (or was it Matt Moore’s house…hmm…maybe my memory is fuzzier than I thought…) and my friend had fallen asleep as we watched hour after hour of South Park which at the time only had one or two seasons. It had been an amazing marathon leading up to Halloween weekend. Then the most amazing thing happened. Comedy Central aired An American Werewolf in London. I had planned to watch just a few moments of the film, but after beginning the story, I had to see it through. It was love at first viewing. Since that fateful evening, I have returned to this film every few years. While the film was received with modest praise and misunderstanding upon its release, it has grown in stature in the nearly forty years since its release. For me – this film, along with late night screenings of Army of Darkness and TNT’s Monstervision – shaped me into a horror film fan. This film absolutely blew me away the first time I saw it and has remained a favorite over the years. When I saw that Arrow Video was releasing a new collector’s edition of the film, I was beyond excited. Arrow Video are a collector’s dream for any favorite film, and I couldn’t wait to see what they were going to do with it.

The plot of the film revolves around college students David Kessler (David Naughton) and Jack Goodman (Griffin Dunne.) As they backpack through the hillsides of England, Jack talks to David about how much he would prefer to be in Italy. After being dropped off the back of a truck full of sheep, they walk their way through the English countryside. They come upon a pub called The Slaughtered Lamb and meet some of the strange town folk. The townspeople become quiet when they enter, immediately giving the sense that they are not welcome. The pub has no food and the only hot drink it features is tea. After a lively discussion of the Alamo in the pub, Jack asks the pub denizens about the five pointed star on the tavern wall. This causes a gasping silence and a man throwing darts misses the board. Jack and David are asked to leave. One man warns them to stick to the roads and avoid the moors. When they fail to follow this advice, they encounter an unknown beast – a werewolf. Jack Goodman is killed by the werewolf and David is attacked. The werewolf is shot and transforms into a naked human being. David awakes in a hospital in London. He is attended to by a beautiful nurse named Ms. Price (Jenny Agutter) and Dr. Hirsch. The news report says that Jack Goodman was killed by an escaped lunatic. David finds out that he had been unconscious for three weeks and his wounds had been attended before he arrived at the hospital. David begins to have nightmares and dreams where he is running through forests. His dead friend Jack comes back to let him know that the werewolf’s curse will not be lifted until the werewolf’s bloodline is severed. Jack informs David that he needs to kill himself for the protection of others. Until David kills himself, Jack will be forced into a form of limbo amongst the undead. David will becomes a monster at the first full moon. Fearing that Jack may be correct, or that he is losing his sanity, he convinces the nurse to let him stay with her. As their romance blossoms, the full moon draws closer.

An American Werewolf in London is a fantastic film. Rewatching the film is the equivalent of chicken noodle soup for the horror fan’s soul. There are some films that have nearly endless replay value and I think that this film qualifies. While the film was misunderstood by many critics when it was released, the brilliance of the film has grown in stature over the years. John Landis had been pigeon-holed as a comedic director because of the tremendous success of both Animal House and The Blues Brothers. I think that hampered to reception of the film by the critics. It was hard for them to understand that a film can be many things – funny and scary – sexy and violent – lightheartedly fun and darkly dramatic – all at the same time. It is a high-wire balancing act that should have been applauded at the time. Luckily, it inspired an entire generation of filmmakers to do what they please and helped to change how horror films were made. I think it is safe to say that we could not have Hostel, Shaun of the Dead, or many other films without the existence of An American Werewolf. It breaks damn near every barrier that existed for horror writing in a similar fashion to how Blade Runner changed science fiction forever.

The movie features excellent performances. Every actor delivers in the film. Griffin Dunne brings sardonic wit to his role as John Goodman. David Naughton brings a youthful exuberance to David Kessler and makes the character feel real. Jenny Agutter brings a sadness to the role of Alex Price. The supporting cast are all perfect.

The direction of the film by Landis can not be overstated. The film has been imitated but never topped for its unique atmosphere. The distinct look of the film, while muted in color, still looks fantastic. The scenes in the subway and in Piccadilly Circus are still as amazing as when they were first filmed. The transformation sequence still stands as the greatest practical effect ever filmed and it earned Rick Baker an Oscar.

This is a film that any horror film lover will want to add to their collection as soon as possible.

Out of the moors and fog…An American Werewolf in London comes howling onto Blu-Ray with a brand new 2018 2K transfer from a 4K scan that looks pretty great. This is the information contained in the liner notes:

“An American Werewolf in London has been exclusively restored by Arrow Films and is presented in its original 1.85:1 aspect ratio with mono and 5.1 sound.

The original 35mm camera negative was scanned in 4K resolution at NBC Universal’s Studio Post facility. The film was graded and restored in 2K resolution at Silver Salt Restoration, London. The grade was approved by director John Landis. The original mono mix was remastered from the original mag reels at Deluxe Audio Services, Hollywood.”

Arrow Video have always been reliable on providing the best possible transfers of the cult films they acquire. In the case of this film, it is pretty obvious that they have done everything they can to make this film look the best that it can. This film has been released on Blu-ray twice before, but in the hands of Arrow, it has been given its best presentation. This film visually is pretty muted. Don’t expect it to pop with a lot of color. Despite the prevalence of night time scenes, the grain has been managed well. Fine detail is great. For the time being, this is the best this film has ever looked.

Similar to the video, the audio presentation on An American Werewolf in London is very well done. Arrow have provided two options for audio mixes. The DTS-HD MA 5.1 is the same reliable track that Universal has provided on their recent Blu-ray release. I love this surround track and think it sounds great. For the purists, the LPCM 1.0 Mono track sounds great. Arrow understands that this release will be analyzed on every front, and their audio treatments are going to make all the fans of the film happy.

An American Werewolf in London has long been one of my absolute favorite horror films. It is one of the most influential horror films ever made and time has been kind to the film. The film’s numerous dream sequences and the infamous transformation scene are still as effective as when they were first unleashed into the world. The film serves as an ode to the old Universal Monster films while also providing something funnier, scarier, and with more gravitas than any of those films. Arrow Video has provided one of the best special features package that I have seen on any film. Aside from the excellent interviews featured with John Landis, Rick Baker, and more, there are two full length documentaries on this disc, including the acclaimed film Beware the Moon that focuses solely on An American Werewolf in London. I watched every single feature on this disc, and I feel like this is one of the better examples of a collector’s edition that is obviously made by the fans. I love this movie and it is obvious that Arrow Video loves this movie too. The packaging for the film is some of the most attractive I have seen and includes a poster and numerous publicity postcards and a fantastic 60 page book with writings on the film. If you love this film, you owe it to yourself to buy it now! 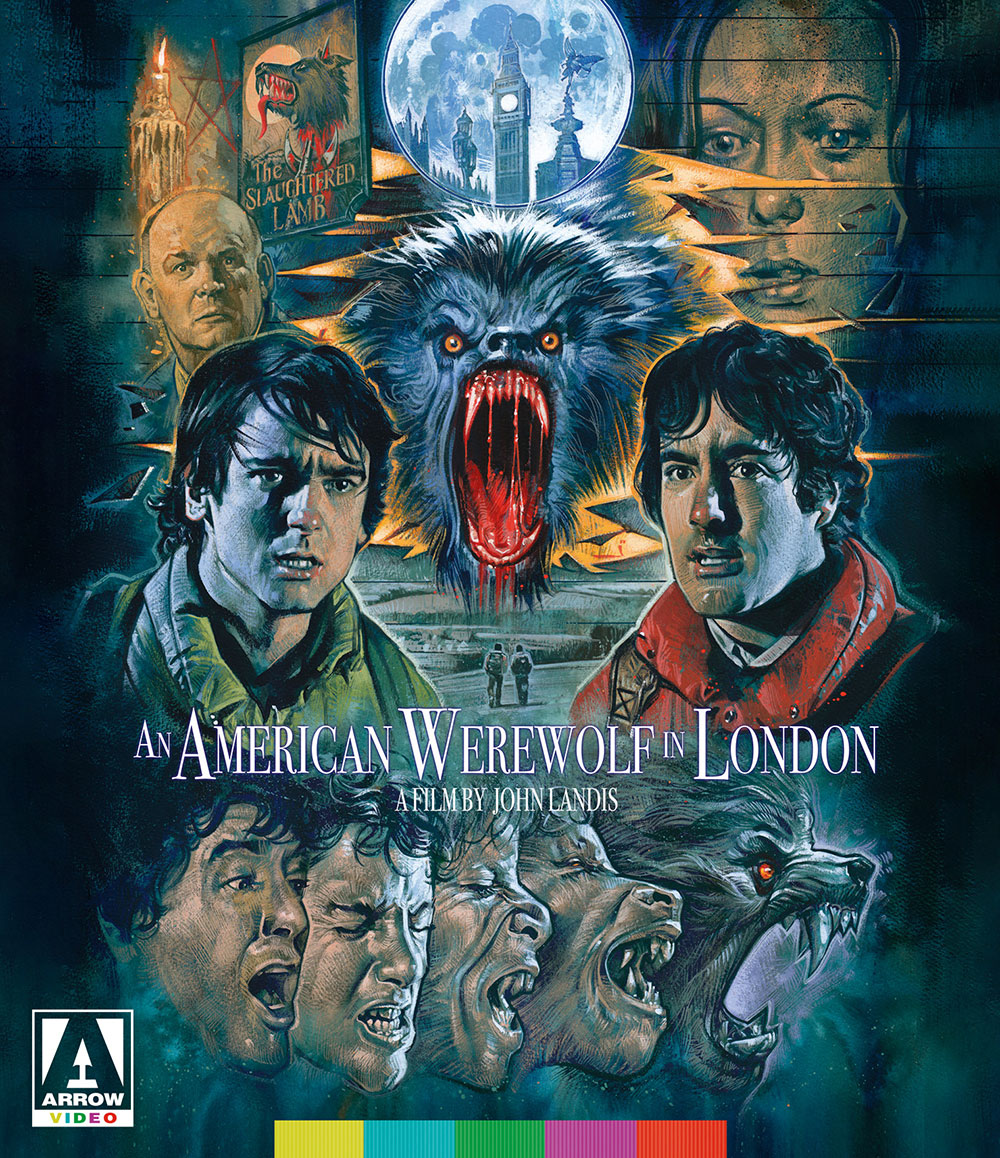