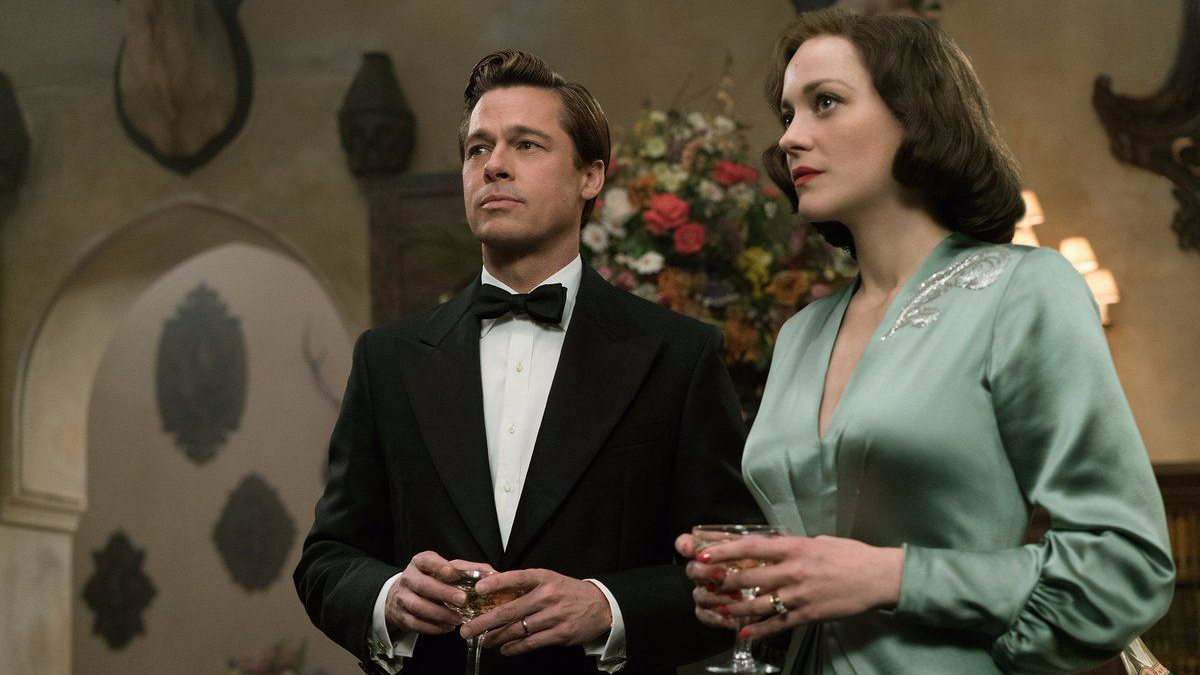 I was recently watching one of my favorite films, Thelma & Louise. It’s widely credited with putting a then unknown actor by the name of Brad Pitt, on the map. Pitt, over the course of the last few decades, has certainly made a name for himself with his acting abilities and his off screen shenanigans, but I won’t go there. Yes, he’s been in a few duds, but he’s always chosen his projects carefully and when the curtain finally falls – I’m willing to bet that Mr. Pitt will go down as one of Hollywood’s more memorable actors. Conversely if you look at the career of director Robert Zemeckis, it’s composed of well-known films that simply define pop culture. Forrest Gump or Back to the Future, anyone? Throw in an Oscar winner with Marion Cotillard, set the backdrop against World War II (no Nazi killing this time around) and we’ve got Allied – the true story of how far people will go for both love and war. Intrigued? You should be.

Pitt plays a U.S. intelligence officer, Max Vatan who pairs up with a resistance fighter – Marianne (Marion Cotillard). The fact that the movie begins in Casablanca is an obvious nod to the title film, and if you’re going to tip your hat to a movie – this is about as good as any. Their mission is simple: assassinate the German ambassador. However, there seems to be some chemistry between the two (who are supposed to be married, anyway) and as the two are living the life in England – Max receives some rather interesting news. The news? Marianne may or may not be a German spy, but Max wants to prove her innocence.  It’s a cat and mouse game that, had it not been based on a true story, would be very difficult to believe.

When all’s said and done, Allied isn’t a bad movie. It’s not Pitt’s best movie, nor Cotillard’s or Zemeckis’ – but it’s really not a waste of time, either. I rather preferred Pitt’s Lt. Aldo Raine in Inglorious Basterds, but he’s a lot more straight-laced here (as he should be). And he delivers a good performance. Cotillard, I think, is an actress who’s been given credit (winning the Academy Award for La Vie en Rose), but when you’re in a “Brad Pitt” movie – you’ll always play second fiddle to him. Still, historical drams and good ones at that, are a bit hard to come by these days and Zemeckis does well with the film, the CGI and making this nearly unbelievable story – believable.

Seeing Brad Pitt’s character parachute in and land in the desert is a bit misleading once you see the featurette showing him in a Hollywood soundstage. Why do I mention this? Well Zemeckis really likes his CGI, but to his credit – he knows how and when to use it. Having said that, Allied is one amazing-looking picture from beginning to end. Pitt, now in his 50’s, looks every bit as good as he did a decade ago and by and large these 4K discs don’t do many favors to their stars. This would be an exception. The included 2.40:1 HEVC 4K image is simply flawless from beginning to end. Dark scenes in Casablanca, walking across the desert and interior shots simply have no error. The HDR of the Ultra HD disc really gives some of the scenes a bit more life. Contrast and black levels are rock solid. Either way you go, Blu-ray or 4K you’re in for a treat.

You would assume that a director as technically savvy as Robert Zemeckis would have the “latest and greatest” sound setup for his movie on 4K. You would be mistaken. No, there’s not a DTS X or Dolby Atmos track to be found here, rather both the Blu-ray and 4K versions of the film contain the same DTS HD Master Audio soundtrack. Now, that’s not to say that this is bad – not by any stretch of the imagination! There are plenty of opportunities for the film to flex its audio muscle be it gunshots, car tires squealing or anything else associated with a wartime pic. Vocals are strong and precise with the surrounds and LFE both contributing to the general aural pleasure that this soundtrack oozes. It’s a shame that a next generation audio format isn’t present on a next generation video format, but this is by no means a letdown. Far from it.

As is the case with most Ultra HD’s, all of the supplemental material is located on the Blu-ray.

Allied has something in it for just about everyone. It’s got great production design, the attention to detail is amazing and Pitt and Cotillard both turn in great performances. I found it a bit slow at times, but the eventual pay off (difficult as it was to see coming) just about made up for it. Paramount’s 4K disc looks amazing and sounds nearly as good. Fans should pick up a copy, but the rest will serve best with a rental.