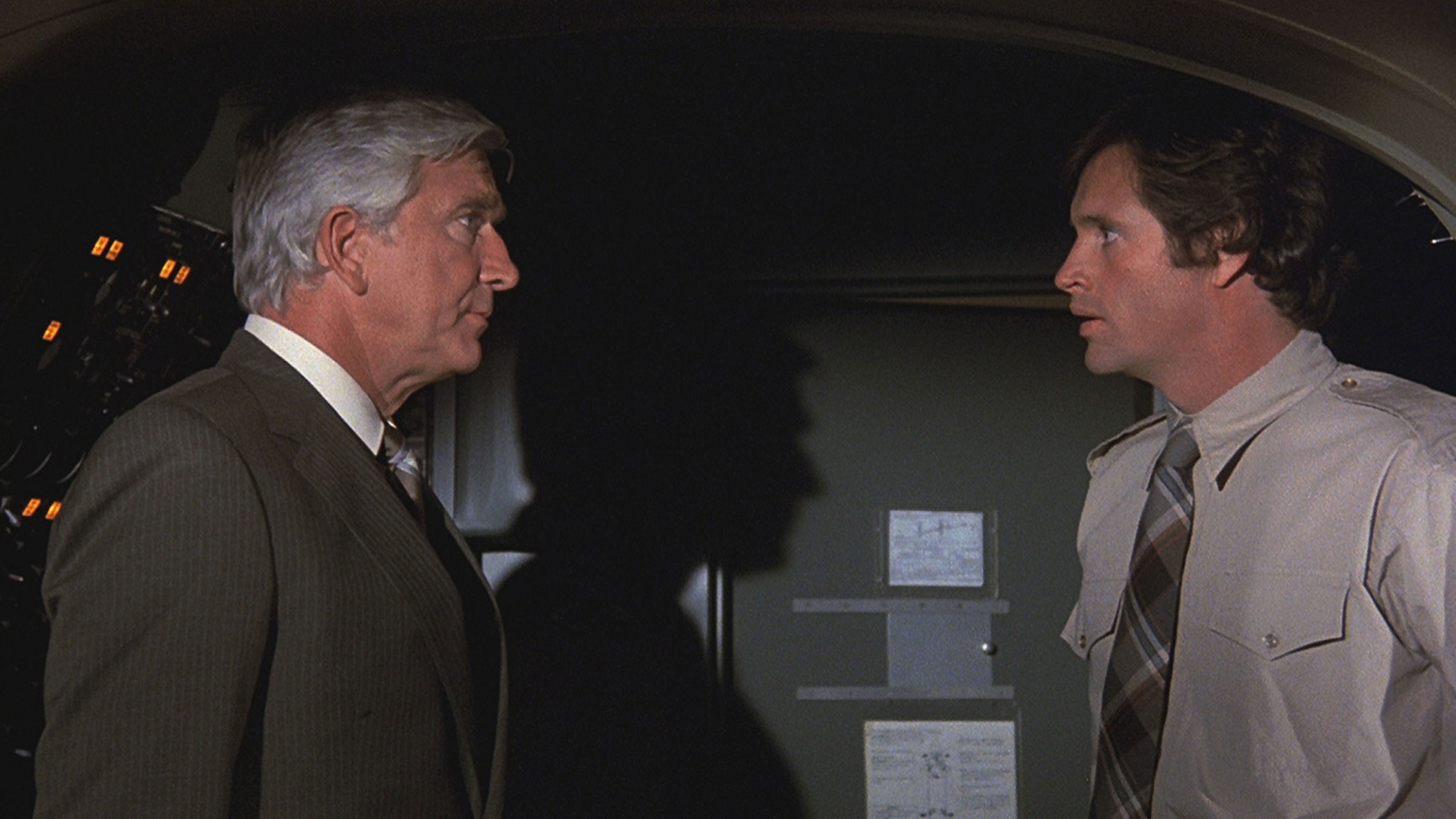 “A hospital? What is it?”
“It’s a big building with patients in it, but that’s not important right now.”

Four decades ago, there was a genre of comedy that took the world by storm. It was wacky and it was fun and it took a nostalgic touch and put a comic spin on it. It was the “parody film” and it was the genre Mel Brooks was the master of in the seventies. In the eighties, another breed of parody film came from three of the founders of the Kentucky Fried Theatre, whose film “Kentucky Fried Movie” was a surprise hit amongst moviegoers at the tail end of the seventies. At the beginning of the new decade, an idea they had for many years became a reality, it became another surprise hit, and it became Airplane!

Ted (Robert Hays) and Elaine (Julie Hagerty) are in the midst of ending their relationship. Ted’s still healing from old emotional war wounds and Elaine has reached the end of her rope. In a desperate, final attempt to woo her back he boards the plane where she’s the stewardess. Elaine isn’t impressed. But Ted’s history as a fighter pilot comes into play when the passengers and crew are stricken with food poisoning. He’s the only one who can land the plane safely, but his own inner demons might get the best of him. He’s got help on the ground as well. Can Ted save the day, the lives of the passengers and his relationship with Elaine?

After more than forty years after its release, this viewer expected the laughs to come once in a while and with memories that it was good at the time but not sure if I could say the same now. With that being said, I can honestly say that it is still a funny movie and that many of the puns in this movie still make me howl a little more than some of the recent fare that passes for comedy. The fun is quick and very spontaneously making fun of the Airport/Disaster movies of the seventies. There are at least five scenes in this movie that make me laugh more than ever. It’s interesting that this film was loosely based on an older movie with the same idea but a serious movie.

The film certainly paved the way for more spoofs to come, mostly from the same guys who made this movie. Today is no time for the parody film to come back, but it is amusing to look back and see that it was funny, it still is funny and maybe sometime in the future (not too near) filmmaking can go back to a fresh kind of film the way Airplane! did in the eighties.

I’ve always found Airplane! to look pretty good on video. Past editions have been a bit lacking, but this Paramount Presents line of films has upped the ante with some jaw-dropping transfers. The film mainly takes place in, as you might expect, an airplane and the lighting tends to be a bit dated, but the overall image does look nice and clean. There is a lot of stock footage used for the exterior shots of the plane as well as some of the ground shots. Colors seem a bit on the earthy side, with the brown hues of the interior of the plane taking over. I mentioned the lighting, it’s common of the time but it makes it look like everyone’s face is extremely oily. Still, I noticed no obvious flaws, detail was impressive as was contrast. It’s a step up from the previous editions, to be sure and fans will enjoy this new and improved look.

The same DTS HD Master Audio soundtrack found on the previous edition is present here. And, let’s face it, there’s not much more that could be done to this to make it sound better. Dialogue sounds very natural and there’s almost always a constant humming from the surrounds as the propeller sound plays in the back (a running joke, since the airplane is a jet). Elmer Bernstein’s score is resonates throughout and I was impressed as to how strong this mix really is. Certainly it’s not on par with the movies of today, but it’s not a bad offering.

As is the case with some of these Paramount Presents titles, some of the supplements from past editions have been removed. But the good news is that we’ve got a couple new supplements with this version.

A bona fide classic. Airplane! is in my top 5 favorite movies of all-time. I’ve watched it on countless occasions and I think I like it more with each viewing. I don’t have to sell this one – it sells itself. They truly don’t make them like this anymore and trust me, they’ve tried. Paramount’s new Blu-ray looks the best the film has ever looked and the addition of some new supplements is always welcome.