Hmmm, there are a lot of ways I could approach this initial paragraph. I could talk about Will Smith. I could talk about Jaden Smith. I could talk about M. Night Shyamalan.  Decisions, decisions. Oh let’s go with the obvious, shall we?  I’ve always been a big fan of Will Smith.  Back in the 80’s I was listening to DJ Jazzy Jeff and the Fresh Prince (Will Smith was the Fresh Prince, of course).  When Smith got his own television show, aptly titled The Fresh Prince of Bel-Air, I was a fan and with his inevitable foray into the world of films, there’s been only a few that I haven’t enjoyed.  Smith always plays strong characters and sometimes they’re the same character (think Bad Boys and Independence Day) but he’s nonetheless entertaining.  A few years ago I was nearly moved to tears (bear in mind I tend to lack any sort of emotion when watching films as I’ve become that desensitized) when he starred with his son in The Pursuit of Happyness. It was nice to see such chemistry, for obvious reasons, on screen.  And so with After Earth, they’re once again starring in a movie together.  It’s been seven years and Jaden is no longer the adorable little tyke he was, he’s an adolescent.  And his name now precedes his father over the title of the movie.  What’s going on here?

It’s been over a thousand years since mankind has destroyed Earth. They were forced to flee the planet and only a scant 750,000 of them made it.  Nova Prime is now the new home of the human race and Kitai (Jaden Smith) wants nothing more than to be like his father, Gen. Cypher Raige (Will Smith).  Kitai is eager and unexperienced and has failed his test to become a Ranger.  Having been reunited with his father (who was on an extended mission), he feels that he’s not lived up to potential.  However as fate would have it, Kitai and Cypher are on a ship that’s been damaged by an astroid storm and are forced to make a crash landing on Earth.  The planet, a once sprawling place where humans thrived, is now a deathtrap.  Cypher’s leg is broken and it’s up to Kitai to brave nature and retrieve a beacon from the tail of the ship.  The trouble is – it’s 100 kilometers away and plenty of dangers stand between him and the beacon.  Will Katai be able to save his father and escape the planet or are they doomed to die on Earth?

You can read the last sentence out loud and guess what’ll happen, but for those that don’t want any spoilers I’ll say no more.  I found After Earth to be mildly entertaining and all of my praise that I lauded on Will Smith in the opening paragraph made me scratch my head. You see, Will Smith was positively awful in the movie.  Granted his character isn’t supposed to possess fear, but I find it hard to believe that he’s also void of personality. He never cracks a smile and rarely even turns his head.  Ironically enough, Smith starred in I, Robot – a role he’d have been perfect for here.  And, depending on which scene he’s in, his accent is somewhat akin to that of a Georgia plantation owner or a native of Morocco.  Yes, it’s that inconsistent.  Jaden Smith isn’t much better here and I know the kid can act after seeing him in The Karate Kid and The Pursuit of Happyness.  Maybe M. Night Shyamalan wanted to tone things down a bit.  Nevertheless, if you’er looking for exuberance – look elsewhere.

Visually-speaking, the film does look good. There are plenty of futuristic gadgets that will make your eyes wander all over the 2.40:1 AVC HD image and detail is simply amazing.  The definition in pretty much everything stands out, from the trees on earth to the nuances in Kitai’s suit.  The opening sequence takes place on a space ship and contrast and black levels weren’t challenged at all, the picture maintained a very solid-like image throughout.  Flesh tones seemed natural and warm, though as the film progresses we do see a bit of change in the texture of the main characters.  Putting aside the content (and performances), this is on fine-looking picture.

Additionally, the DTS HD Master Audio soundtrack is top notch.  By and large, most Science-Fiction films will feature a good-sounding track and this is no exception.  Vocals are crisp and clean and as I mentioned above, we get to hear every nuance of Will Smith’s inconsistent accent.  It’s never explained, but many of the characters talk like that – I don’t know why they couldn’t have used their natural accents, but I won’t dwell on it.  The asteroid shower is a nice sequence as is the crash landing on Earth.  Surrounds are used often and with great effect as well with the LFE chiming in a few times when Kitai has his final stand with a “monster” of sorts.  Again, a top notch effort technically. 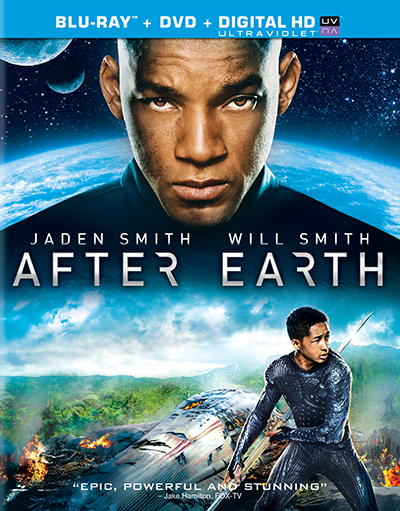