A Most Violent Year (Blu-ray)

The plot revolves around Abel Morales (Oscar Isaac), a businessman on the verge of achieving his dreams in New York in 1981. Abel has the support of both his wife Anna (Jessica Chastain) and his lawyer (Albert Brooks.) Abel owns a heating oil business and at the beginning of the film he meets with a neighboring business to buy their large complex. The complex is owned by a group of Hacidic Jews who agree to sell the building if Abel can close in a month. They agree to the terms of the deal because Abel puts his entire fortune at stake as a deposit. The bad news for Abel is that the next month of his life will be the most difficult. Somebody is beating up the drivers of his oil delivery trucks and stealing the fuel. He has a run in with an attempted home intruder and his toddler finds a gun in the bushes the next day. Meanwhile, the District Attorney (David Oyelowo) is going to bring charges against Abel and the bank that is supposed to help close the deal is growing weary. Meanwhile, the teamsters want him to arm the drivers or they will walk off the job, and his wife is pressuring him to violently lash out at whoever is attacking their business.

The film manages to ride a wave of tension from the first moments to the very end while having very little violence on screen. I was amazed at the ability of the film to keep me gasping and guessing the entire time. The acting is absolutely fantastic with great performances from Oscar Isaac, Albert Brooks, and Jessica Chastain. There is not a single bad performance, with Jessica Chastain stealing every scene she was in. Oscar Isaac is quickly becoming one of my favorite actors working today with his excellent performance that combined intensity and compassion.

Some people have criticized the pacing of this film and called it slow. Personally, I thought that the movie did not have any fat that it needed to trim. There are not any scenes in the film that I would alter. The director really nailed the era, with mesmerizing location and costume choices. It’s just plain great. As a businessman who works with family I could not help but enjoy it on a personal level. Please do yourself a favor and watch this fantastic piece of art.

LionsGate did an excellent job in porting over the film. Colors and detail are sharp and defined. The film looks fantastic on Blu-ray. Visually, I think the movie pops and the Blu-ray is a perfect port of the digitally filmed movie. There are no compression issues whatsoever. It looks great.

The original master audio is presented in DTS-HD 5.1 surround. The movie is not particularly bombastic but the LFE channels are put to good effect in a few instances. This is mainly a dialogue driven affair and the audio reflects that. The track is crisp and dialogue is not ever lost in the sound field. The music in the film is quite well done, and I particularly enjoyed hearing “Inner City Blues” by Marvin Gaye in surround. The audio is reference quality if it is not necessarily going to blow out your speakers.

Mastering the Craft (1080p; 4:49) – These little snippets talk about how Jessica and Oscar knew each other as students in Juilliard.

A Most Violent Year is a consistently engaging and surprising film. I enjoyed every minute of this film and look forward to watching it again soon. I highly recommend that you purchase this Blu-ray as the fidelity of the transfer is excellent and they have included some interesting special features. This is about the happiest I have been with a non-Criterion release this year. Is it too early to call it a classic? Go get it! 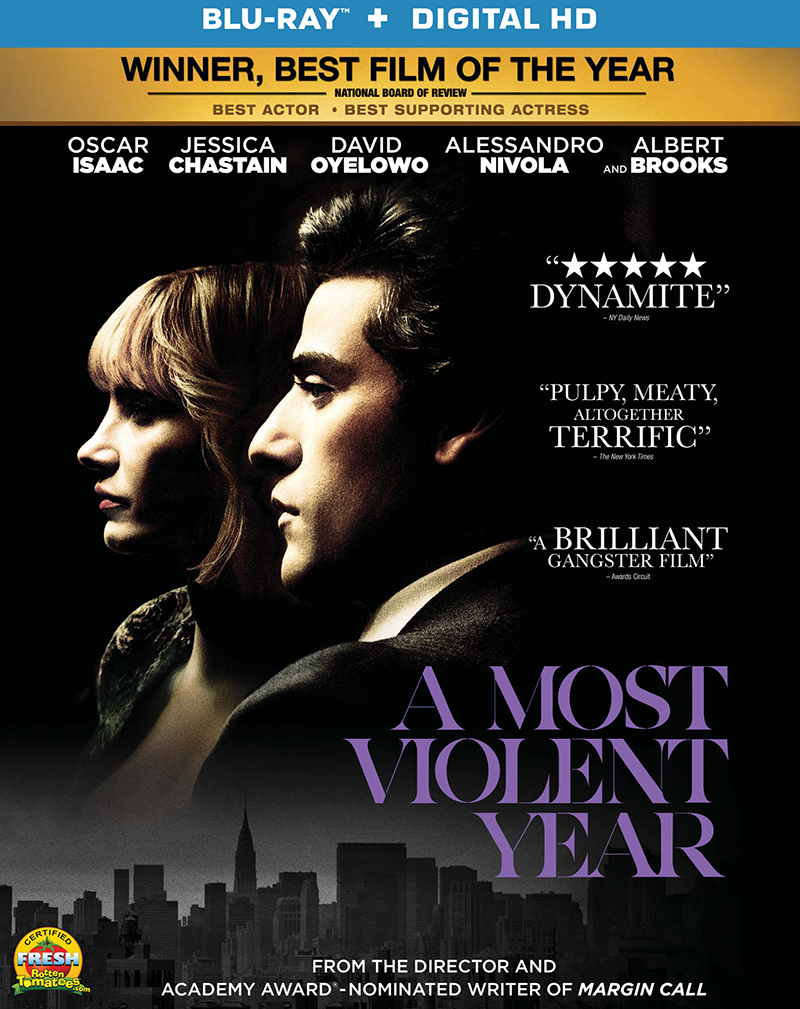