As we get older, I suppose it’s natural to think about one’s health. I’m still (as of this writing) under 40 and have always remained in good shape and therefore, good health. Of course, others out there aren’t so lucky and cancer remains one of the biggest killers in the world. My wife, a registered nurse, works with patients afflicted with M.S. (Multiple Sclerosis) and having heard some of the stories from her, I realize how fortunate I’ve been with my personal health. However just because someone’s managed to stay out of the hospital their entire life or doesn’t constantly frequent a physician’s office doesn’t make them any more or less healthy. Cancer is a killer and part of what makes it such is the fact that it’s your own cells that “turn” on you (as opposed to a virus like AIDS in which foreign cells enter your body and attack it).

Adam (Joseph Gordon-Levitt) is a nice guy. He doesn’t drink, doesn’t smoke and keeps himself in good shape. He’s got a girlfriend (Bryce Dallas Howard) who aspires to be an artist. Yes, things are going Adam’s way until he gets a pain in his back checked out and learns that he has cancer. With the help of his co-worker and best friend, Kyle (Seth Rogen), he takes the necessary steps to try and rid his body of the cancer. Adam’s appointed a therapist, a young go-getter by the name of Katherine (Anna Kendrick) who Adam can’t really take seriously due to her age. We follow Adam in relatively good spirits despite some questionable behavior from his girlfriend. We see his ups and downs and how he’s dealing with the real possibility of death. Adam’s mother, Diane (Anjelica Huston), offers what support she can though her husband (Serge Houde) suffers from Alzheimer’s. Things have to work out, right? Not necessarily. Given his odds of survival, 50/50, there’s no certainty in life other than death.

I’d seen the trailers for this film last summer and being a big fan of Joseph Gordon-Levitt, wanted to check it out. The movie was actually based on writer Will Reiser, who was diagnosed with cancer and later recovered. Seth Rogen helped Reiser cope with his disease and convinced him to write a screenplay during their early 20s together. Of course, those familiar with Rogen won’t be in for anything different as he plays the same character he plays in, well, every single movie. Still, he’s good at it so why fight it? What the movie manages to do is walk a very fine line between sadness and humor and it seems to pull back at just the right time. I spent the majority of a movie with a tear in my eye. That doesn’t happen. Joseph Gordon-Levitt pulls off this role effortlessly and I believe was cheated out of an Oscar nomination. While not the easiest movie to watch, 50/50 was one of the better movies I saw. A strong cast, good performances and a solid script make this a tear-jerker and a nail-biter and something not to be missed.

The 1.78:1 AVC HD image is just as I expected it to look – good. The film takes place in Seattle and with the perpetual overcast skies, one might think it would lend itself to over-saturating the image. Not so. Detail is very strong, offering a consistently sharp image with no grain evident. There aren’t a lot of bright, vivid colors in the film but that’s a reflection of the tone of the film. Rogen’s scruff is always visible and the definition on the head-shaving scene is a prime example of how clear this picture really is. Some of the exterior shots are a bit on the washed out side, but it’s of no consequence as this transfer is nearly as good as it gets.

The DTS HD Master Audio soundtrack is nice with some great songs thrown in here and there. While not as good as those in, say, 500 Days of Summer, this does manage to deliver the goods. For the most part this is a dialogue-driven piece with even parts of “action” and some of complete silence. Surrounds chime in a few times as do the LFE, but the front stage takes the brunt of what this track offers. My expectations weren’t really that high for this, so I have no real complaints.

While not a full-blown edition bursting with supplements, 50/50 does contain just enough to warrant a purchase. First up is the feature-length commentary with with director Jonathan Levine, Will Reiser, Seth Rogen, and producers Evan Goldberg and Ben Carlin. It’s a pretty chatty track and a bit heartfelt as well. It’s a welcome addition to the film, for sure. Next up is “The Story of ’50/50′” which showcases the film and its inspiration from writer Will Reiser. “Life Imitates Art” is a good compliment to this feature as Rogen, Reiser and Goldberg reminisce about certain scenes in the film and their own experiences. “Seek and Destroy” follows Joseph Gordon-Levitt and Seth Rogen as they destroy the painting in the film. Lastly some deleted scenes are included with optional commentary by Levine. 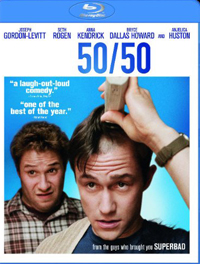