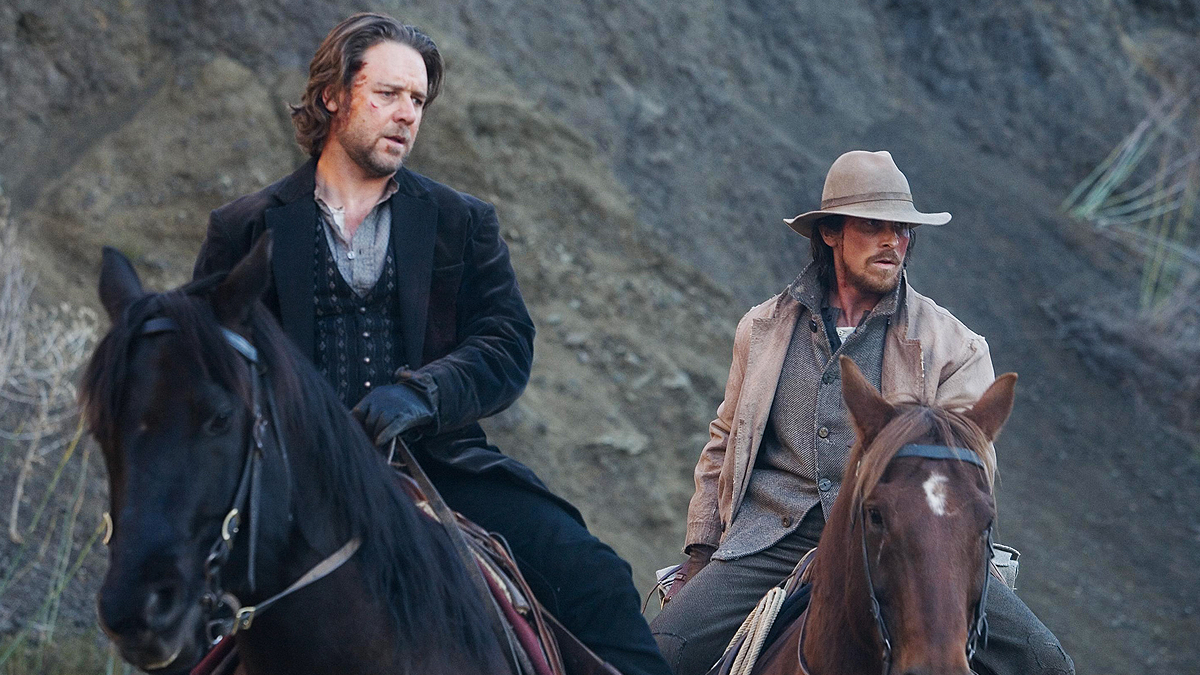 I vividly remember reading Roger Ebert’s review of the updated version of 3:10 to Yuma starring Russell Crowe and Christian Bale. Westerns aren’t exactly a dime a dozen these days and when the predecessor to this movie was released in 1957, they were. I’m not a huge fan of re-makes, unless, of course, they make an improvement. This is the case with Ocean’s Eleven, Batman Begins and with the film in question. I’d actually seen the 1957 version in film class and though good, I’d forgotten it with all of the movies I’ve seen since. This updated version brings a little more grit into the picture and I have to say that Russell Crowe and Christian Bale are two of my favorite actors working today putting them in a movie together is absolute genius. I’m also a fan of director James Mangold who directed one of my favorite movies in recent memory with Walk the Line the biopic of the late country star Johnny Cash. All the elements are there and the movie has an intriguing storyline, but could it all work?

For those not familiar with the plot, it’s not exactly complicated. Ben Wade (Russell Crowe) is an outlaw who’s finally been captured and is en route to his sentencing. He and his dedicated gang, led by Charlie Prince (Ben Foster), have caused mischief and mayhem for quite some time and the capture of Ben is quite the feat. We then get an insight into Dan Evans (Christian Bale) a war vet who’s lost his leg and is desperately trying to keep his farm from being run into the ground. As it so happens, Ben is in need of an escort to make sure he gets on the train to Yuma (departing at 3:10, obviously) and, needing the money, Ben agrees to chaperone for enough money to get out of debt. Things don’t go as planned as Ben’s son also comes along for the ride and as Dan and Ben get to know each other, they develop an unspoken bond. Is Ben really an outlaw with a heart of gold or is he just using Dan to further himself and will try to escape at the first chance?

As far as Westerns go, there are a few that stand out as being truly great. Sure there are classics like High Noon, The Wild Bunch and Unforgiven but as uncommon as the genre is today, it’s quite a feat to create such an atmosphere of tension and unrest in a movie. “3:10 to Yuma” manages to avoid most every stereotype and cliché and manages to tell an intriguing story along the way. Christian Bale and Russell Crowe are in top form as well. The two are the headliners of the film but look closely and you’ll see Peter Fonda in a fairly memorable role. While I realize that Westerns aren’t for everyone, this one does transcend the genre somewhat. It manages to tell a good story but at the same time staying true to the original. That’s a feat in itself.

It’s been nearly a decade since this film first hit Blu-ray. Lionsgate hasn’t done a lot of 4K catalog titles, but the way I see it – this one is as good as any to start with. The genre implies that the screen will be covered in earthy tones, many browns and oranges will persist. It does and, for the most part, it looks pretty good. I did notice some grain and I can only assume that was the intention of the filmmakers to give the film a more rugged feel. Looking at the Blu-ray, there is a definite difference in HDR with some of the skies, backgrounds and even a bit in the wardrobes. Clarity has been improved and it feels like a “slicker” look and feel to the film. It’s certainly a step up from what was already a pretty good-looking movie.

The original Blu-ray contained a PCM uncompressed soundtrack. Those days are now gone and we’ve got a next generation DTS X mix that really pulls no punches. There are plenty of opportunities for the soundtrack to impress and thankfully, most all of those opportunities aren’t wasted. We get bullets whizzing by and bringing the surrounds into play on multiple occasions. The horses galloping and even the high-pitched clinging of the spurs sounds outstanding. This is a loud movie with plenty of opportunities to flex its muscle and it passes the test with every single one. An amazing effort.

The supplements have been duplicated on the 4K disc save for the Historical Timeline of the West and Inside Yuma: An Exclusive Blu-ray disc Interactive Experience. I guess those are no longer “revolutionary” and have been deemed not worthy for the Ultra HD version.**

**The Blu-ray features all of the supplements above plus Inside Yuma and A Timeline of the Old West which both utilize the interactive features. The “Timeline” feature I found intriguing as you can literally click on any year of the late 19th century and get a detail of what happened. More intriguing is the “Inside Yuma” feature which uses a branching technology that gives the user more information about the movie (simply click on an icon and you’ll be taken to the feature).

The Western genre has been slowly dying for several decades now and that’s a shame. There have been some really great ones. And, nowadays, if you’re going to make a Western it’d better be good and I don’t have to say – this one is. It was a real treat to see this released on Ultra HD and while the lack of any new supplements is a tad bit disappointing, the sheer amount included makes it a worthwhile purchase. Improved sound and visuals only add to the allure of this package.