“Do the same thing as last time. Everyone’s happy.”

There’s an old saying: “If it ain’t broke, don’t fix it.” That can certainly be applied to 22 Jump Street, the “even than better than the original” 2012 movie. I’ve said before what I think of films adapted from older television shows, but with the Jump Street films – it doesn’t seem to apply. I remember seeing the first one a couple of years ago and laughing hard. With the second one, I wasn’t sure what would happen. Often times it’s hard to re-create the magic and capture lighting in a bottle. Without giving anything away, I can say that they did it with this. The original wasn’t exactly a fluke, it made nearly $200 million worldwide so a sequel was inevitable.  The second was reviewed to nearly as high (or higher) critical praise and made far more money than the original. Does that mean we’ll see 23 Jump Street (SPOILER: They go to medical school!) in the near future? It’s hard to say, but in an industry devoted to making money, it would seem foolish to stop making films that make it. At any rate, if you’ve seen the first then this shouldn’t challenge you mentally in regard to plot – it’s the same.

After busting the high school drug ring and sending Eric (Dave Franco) and Mr. Walters (Ron Riggle) to the slammer, Jenko (Channing Tatum) and Schmidt (Jonah Hill) are riding high. The Jump Street office has gotten a face lift and Capt. Dickson (Ice Cube) is living large. However there’s a new drug at a local university called WHYPHY (Work Hard? Yes. Play Hard? Yes.) that’s all the rage and Jenko and Schmidt are once again the men for the mission. Once again donning their alter egos, they go back to college and become ingratiated in the lifestyle. They’re not exactly met with open arms, though. Jenko makes friends with the football team and fraternity guys, while Schmidt explores his thespian in the art drama arena. Schmidt also becomes involved with Maya (Amber Stevens) as well as taking verbal abuse from her roommate, Mercedes (Jillian Bell). And, of course, it’s not as easy as it would seem, because they’ve got The Ghost (Peter Stomare) after them as well as trying to find out who the supplier is. Will Jenko and Schmidt be able to survive college?

There aren’t many movies in which I’ve laughed so hard that I literally had to stop the movie to catch my breath. I will say, though, that this is one of them. The standout performance is, far and away, Jillian Bell. Her deadpan delivery of insults to Jonah Hill’s character had me in stitches. Of course both Channing Tatum and Jonah Hill are in top form too. Neither one can be accused of taking themselves too seriously and that’s part of the allure of these films – they’re just out there having fun (and it shows)! Now it’s true that your “bro” and “dude” meters will go off the charts, it’s that kind of humor that makes this film work. And yes, it’s essentially the same film as the first one. Hey, it worked for the Hangover movies – why not this? Most all of the cast is back for this one and there are several new faces (see below for the featurette on them).  22 Jump Street might not challenge you intellectually, but if you’re looking to be entertained (albeit in a very raunchy manner) then I really can’t think of a better way to spend 104 minutes. Highly recommended.

As we might expect, the 2.40:1 AVC HD transfer is first rate and 22 Jump Street looks the part in HD.  I’m hard-pressed to find much, if anything, to complain about (not that I’m trying to complain). It seems that everything that’s new and on the Blu-ray format looks so damn good – it’s hard to pick things apart!  The film has a very nice warm palette showcasing a variety of colors. Flesh tones look warm and natural, detail is amazing (we can see the “crows feet” that Tatum and Hill supposedly have) and black levels and contrast work well off one another. I know I sound like a broken record, but this one is hard to beat.

Just as the first film featured a pretty robust DTS HD Master Audio mix, so too does this.  While this won’t hold a candle to some of the action/sci-fi films out there, I was surprised at how active some of these scenes really were.  There are more than a few scenes of a party (be it in a fraternity house or on a beach). As we might expect, vocals are rich and pure, surrounds are constantly active and the LFE once again get a pretty nice workout. The action/comedy genre makes full use of the dynamic audio throughout and this is actually a pretty decent-sounding film.

21 Jump Street had no Blu-ray exclusives. That’s not the case with its sequel. While the DVD has a nice array, the Blu-ray adds tons more bonus content (there’s even a line of text on the DVD that says “Get the Blu-ray for all 22 (get it?) deleted scenes and more!” And, what’s more, is that the Blu-ray comes with the DVD in it. Why they don’t just include the DVD with the Blu-ray is beyond me. Odd.

Mercedes and the Ghost

Mercedes in the Library

Delroy Has An Idea 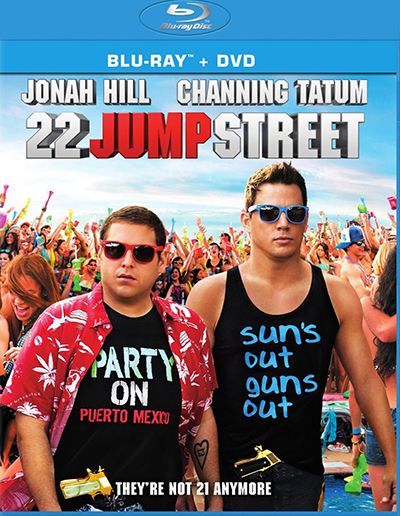