Although the colonists have been put through their paces by the British authorities, not everyone wishes to sever the old ties. But as July 4, 1776 draws near, congressmen John Adams (William Daniels) and Benjamin Franklin (Howard Da Silva) have a plan to buy some time, although they’ll need some help from Thomas Jefferson (Ken Howard). As the two attempt to persuade the remaining colonies to band together and form a new union, they want Jefferson to pen a Declaration of Independence. The road to getting all the colonies to agree will be a rough one, as all the military efforts seem to fall flat, one after another. This bad news causes most of the slave owners, land holders, and businessmen in the congress to be negative about independence, since it looks as if it could spell certain doom. And as one single naysayer can put the brakes on the entire process, it will be a most difficult task to make independence happen. Can these congressmen somehow pass their vision of freedom along to the doubters, or will the colonists choose to remain loyal to Britain, forever altering the historical landscape as we know it?

A musical based on the Founding Fathers? I know it sounds far fetched, but 1776 is a terrific picture that blends history, music, humor, romance, and drama, without missing much of a beat in terms of entertainment. Of course, one could simply find immense humor in the premise of 1776, seeing Ben Franklin, Thomas Jefferson, John Adams, and all the other famous founders sing & dance, often in scenes ala Cop Rock. I mean, right in the middle of a session on how to grasp true freedom, a song breaks out about hot it is inside the room and if you ask me, this is the kind of entertainment Hollywood needs to bring back to life. I know it sounds like 1776 is just a farce, but that isn’t the case, there is some real, albeit unusual magic to be found here, as all the pieces just seem to fall into place. The musical numbers are a lot of fun, the writing is superb for a musical, the costumes & production design are top notch, and the cast, led by William Daniels (The Blue Lagoon, Blind Date) is simply superb in all respects. So sit back, relax, and enjoy director Peter H. Hunt’s definitive version of 1776, thanks to this restored director’s cut.

As this disc serves as director Peter H. Hunt’s definitive vision, he chose to leave some brief snippets that amount to around six minutes out, mostly small trims from various scenes. Hunt also had the overture & intermission removed, since these were never part of the film’s heritage, until someone decided they wanted to have them in the special edition release, so the materials were created and put into the picture. I do wish that the six minutes of trims were still present, but I don’t miss the overture & intermission in the least, since these elements were never part of 1776’s intended presence. As I said, those six minutes are missed and should have been included as supplements, but this is Hunt’s vision and as with any filmmaker, his vision is what matters. So I know some of you will be let down the cuts, but we always claim to want what the director wants, so let’s practice what we preach and be pleased to have Hunt’s intended version at last. I will still hold on the Pioneer laserdisc, but this edition is still a worthwhile one and belongs in the collection of any 1776 fan.

Admittedly I was a bit surprised when I saw that this title was to be re-mastered in 4k and released on Blu-ray. Though it’s a major improvement over the standard DVD from aw while back, this restoration has been worth the wait. A few of the scenes are darker in nature and this will always look like a “70’s film” to me – it’s just the way the lighting is and such. The colors are a little muted, but this is intentional and black levels are stunning, a vast improvement over prior editions. Truthfully this won’t hold a candle to a day and date Blu-ray release, but for those that have been waiting on a newer, better-looking version of this film – the wait is over.

I had some doubts here, but this is a masterful and highly effective mix that makes the film sound so clean and crisp, you might not believe it is the same movie. But it is the same 1776, it just sounds a bit more updated thanks to the DTS HD Master Audio soundtrack. The surrounds enhance the score and even spark in some atmospheric presence, so the mix is strong all around and even the bass kicks with some power at times. The songs are wonderfully presented and vocals remain in fine form, both dialogue and lyrics well covered. This disc also includes English & French subtitles.

Regardless if you wanted it or not, 1776 has been given its due treatment on Blu-ray. I won’t say that I’m not (or ever have been) a fan, but there are tons out there who are. Improved visuals and a new DTS HD Master Audio track are certainly good reasons to upgrade as well as a new commentary track. 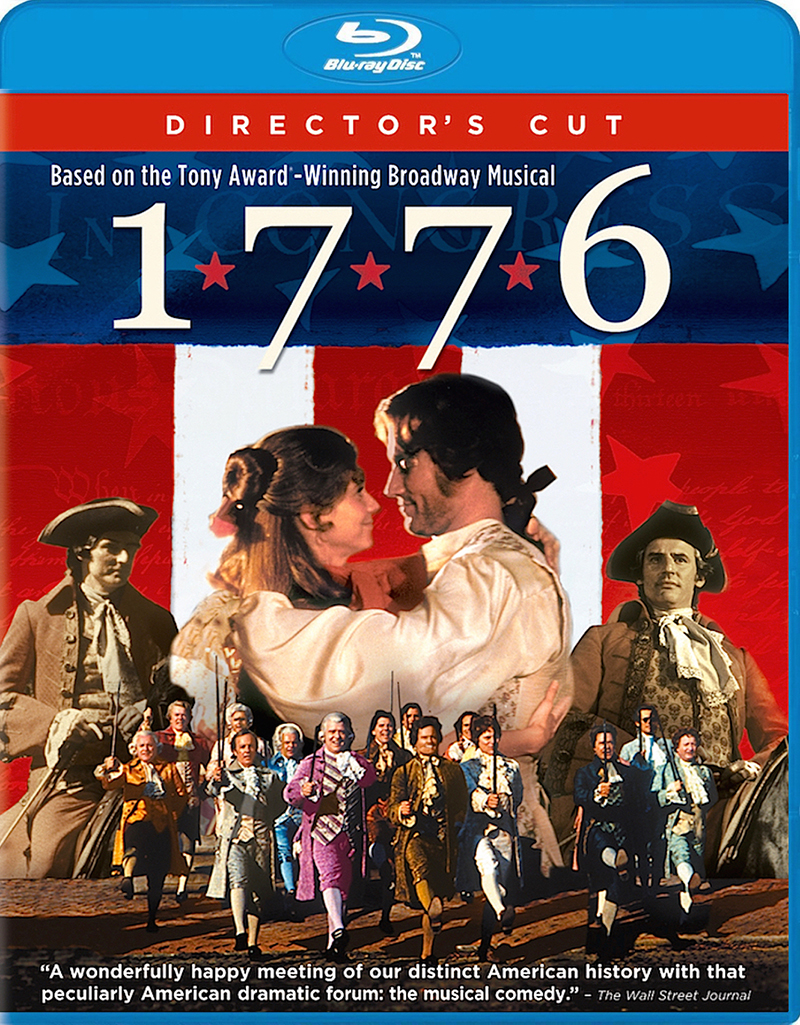