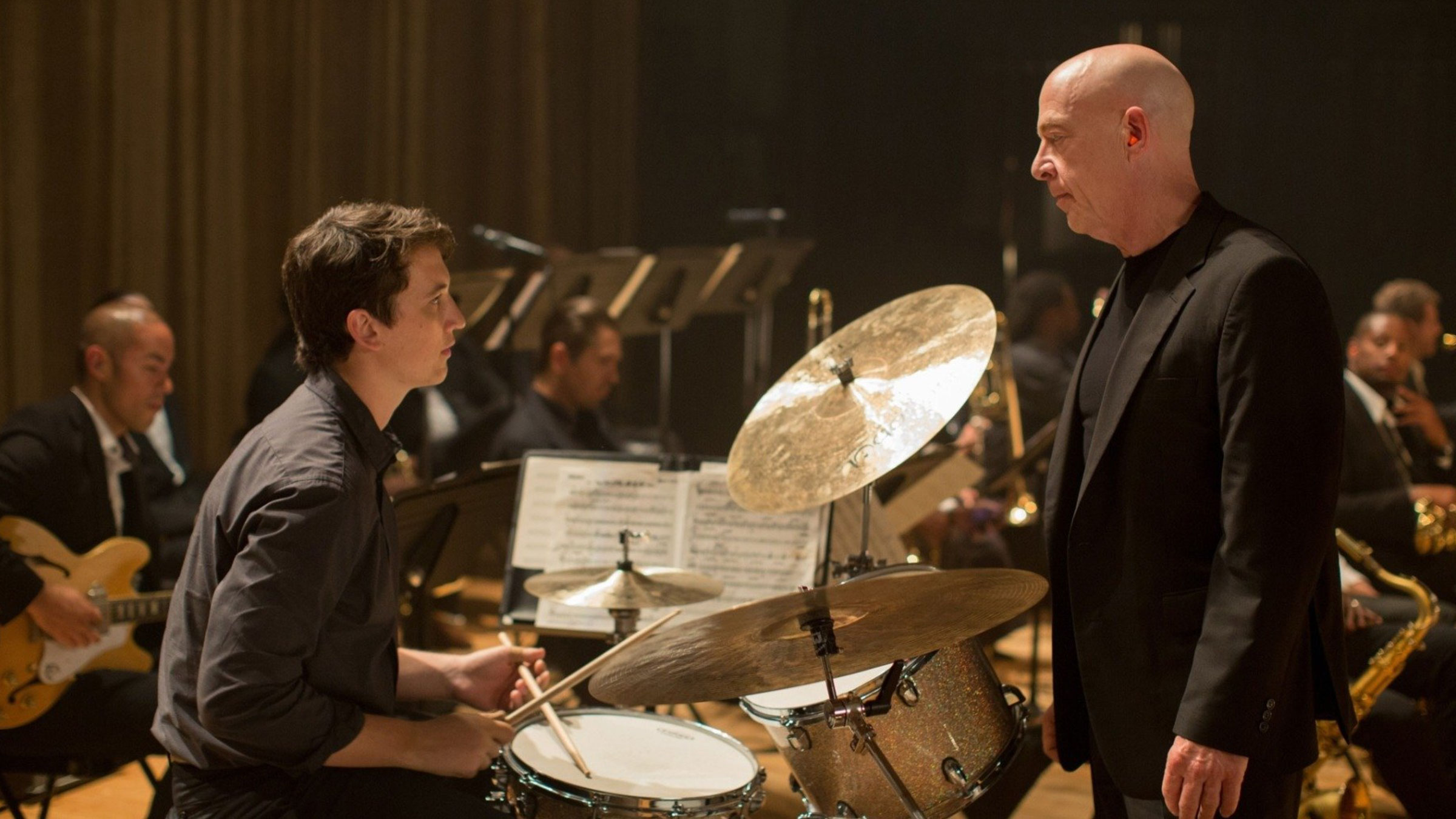 I will freely and fully admit that I don’t possess a single ounce of musical talent in my entire body. Come to think of it, I don’t think anyone in my family does either. Can’t sing, can’t play an instrument (and don’t think I’ve ever actually tried) and I certainly couldn’t play the drums.  So I’m always enamored when I see someone who really does possess those talents. More importantly, and this is the main theme in Whiplash, is that I seem to lack drive. Now that’s a bit misleading as if I had no drive, then I guess I’d never get out of bed. But what I’m referring to is that “killer” instinct. That I’ll stop at nothing to get something right or do it until I literally can’t do something any better. I’ve always seemed to settle for less in some facets of my life. Now this isn’t me throwing a pity party, but rather it’s always fascinated me when I see those who really do push themselves to the absolute limit and are really the best they can be. I’ll use this as a segue for the film which is about anything but settling for less, including those who made it (and made it so enjoyable).

Andrew (Miles Teller) is a gifted jazz drummer and has enrolled at a prestigious music academy to be with the best. He’s tapped early on by Terence Fletcher (J.K. Simmons), a composer who has an eye to see the best of the best, though his teaching methods are a bit extreme – to say the least. Andrew is quickly taken with Terence and stops at nothing to become an integral member of the band. He sacrifices his personal relationships to focus on drumming only to be thrown to the wolves by Fletcher. As Andrew and Fletcher lock horns, Andrew’s obsession grows. His need and desire to impress Fletcher consume him. This all comes to a head at a regional competition when an incident changes both of their lives forever.

As I made mention in the opening paragraph, I possess no musical talent whatsoever. Granted, a lot of us don’t. But I do have an eye for good films and this is certainly one of them. I’ve become more a fan of Miles Teller over the past couple of years. He’s got a natural talent that I like. He was, in part, selected for this role due to this past as a rock drummer, though this part called for a jazz drummer. Evidently the two are night and day. Still, with only 19 days to shoot, Teller manages to pull off the impossible and did a fine job with it. But, and this goes without saying, the real star of the show is J.K. Simmons who will most likely walk off with the Best Supporting Actor trophy for his role. He’s earned his stripes in television, movies and even TV commercials and I think his time has finally come. He owns the part and his performance evoked a visceral response. That’s when you know an actor is good – when you want to punch him in the face because you hate his character so much.

Shot on a shoestring budget, Whiplash looks amazing as it did on Blu-ray. However, with the increased resolution and color depth of the 4K disc, those issues that persisted on the Blu-ray aren’t a problem now. The 2.40:1 HEVC 4K image is dark, very dark. The contrast and black levels work well off one another – there’s no sign of blocking or black crush. The shadows under the eyes give a very eerie look and feel to the characters. After watching the trailer, some of it seems a bit overexposed, but the feature film doesn’t suffer. Detail is crisp and sharp, just looking at the blood on the drumsticks is enough to send a shiver down my spine.  It’s a nice, top notch transfer that’s just short of perfection.

If ever a movie needed to embody sound, it’s got to be this one. I’m not a huge fan of jazz, but after seeing the film I’m tempted to listen to a few songs. The Dolby Atmos soundtrack is one of the most frenzied and active I’ve heard in a long time. Granted there are no explosions or car chases or gunfire, but you don’t need those to have an amazing-sounding track. The crash of the symbols, the beat of the drums and the rest of the orchestra really resonate through the channels and it really sets the mood and, dare I say, the experience for the viewer. Vocals are rich and pure, Simmons’ deep voice carries through the center channel. Surrounds are active during the music sequences while the LFE even have a few moments to shine. It’s an amazing track and one that’s sure to please.

The extras from the Blu-ray are ported over on the Blu-ray disc, nothing new has been added.

Whiplash didn’t win the Oscar for Best Picture, but it did win for Best Supporting Actor. Simmons’ performance is amazing and Teller holds his own for the duration. The disc itself has plenty of features that warrant a purchase and contains a top notch Dolby Atmos soundtrack. This is one of those movies that needs to be seen and experienced.