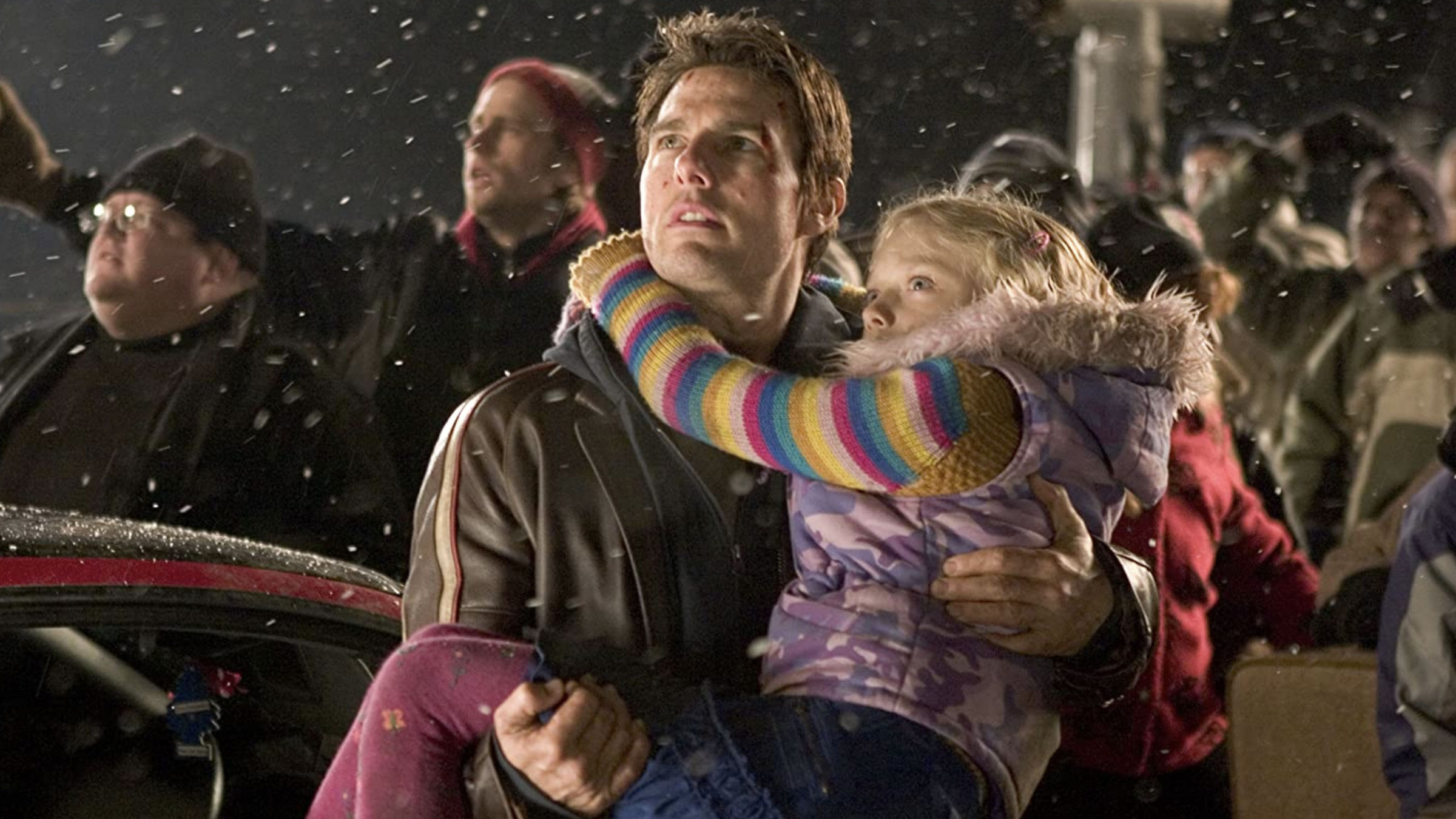 The second collaboration between Director Steven Spielberg and actor Tom Cruise was with War of the Worlds. When the movie first came out, Cruise’s personal life wasn’t so much in question as it is these days. Maybe the guy is having a mid-life crisis or something or maybe the Scientology has finally gotten the best of him. Regardless, as a critic the personal life of an actor shouldn’t have any pertinent role in my review of this film – yet somehow it does. As most anyone knows, the story behind this movie goes way back to the radio broadcast (hoax) by the great Orson Welles, in which he had people convinced that aliens had actually landed on Earth and were destroying it as he spoke. A prank, to be sure but it shows how gullible humans really are. The original movie was made in 1953 and this is a much more updated version, though the premise is nearly the same.

Cruise plays blue-collar worker Ray Ferrier who has his two children for the weekend. The only trouble is that some electromagnetic storms are being reported around the globe and it’s not long before one shows up in New York City. Things go from normal to chaotic in a matter of minutes when Ray and his children, Rachel (Dakota Fanning) and Robbie (Justin Chatwin) somehow escape the destruction. On the way to Boston, the trio stops, but it’s not too long after that the aliens show up there as well. As we learn, the “aliens” have been watching Earth for quite some time and when the time is right, the electromagnetic storms provide the invaders with a method to get in their ships. Is mankind doomed or will Ray and his family save the day?

War of the Worlds was good for the first two acts, but the real downfall is the film’s finale in which things are resolved way too quickly. I don’t think I’m alone here in wanting the movie to be about 30 minutes longer to give us some reason as to what was happening. Spielberg hasn’t lost his touch. The movie had some generally scary scenes and he managed to scare the hell out of me a dozen years ago with Jurassic Park as well. Love it or hate it War of the Worlds was a big money-maker and one of those movies you’ll just have to see. Regardless of how it ended, plausible or not, I felt generally intrigued by the concept and will think twice about what might be lying under the Earth’s surface.

War of the Worlds hits the 4K format in a brand new 1.85:1 HEVC 4K image that breathes new life into the somewhat dated transfer. The film, by and large, is fairly dark. Dimly-lit scenes in basements or that take place at night are common and even the handful of daytime scenes are shown under a muted sky in the concrete jungle of New York City. Colors have been improved somewhat, detail has benefitted and the main thing I found was that the contrast was much improved. This is, of course, due to the HDR.  Flesh tones appear natural, or as natural as they can be with human debris on Tom Cruise’s face. Looking back at the original DVD, there’s a major leap in quality here, but this was never one that looked bad by any means.

Additionally, the film has gained a new Dolby Atmos mix. The included Blu-ray still contains the DTS HD Master Audio mix which sounds good, but is no comparison for the next generation Atmos mix. There are some subtle effects that come through the surrounds, but the major effects are in the subwoofer channel. I don’t think I’ve had my room shake like that in a while. The opening act when the aliens come out of the ground is the main draw and wouldn’t you know that death and destruction make for some great surround sound? They do. There’s nothing to over the top about how this sounds, as we’ve never had alien invaders before it’s kind of hard to replicate what we think that sound might be like?

Paramount originally issued this as a single disc release and also as a more robust two-disc edition. The included Blu-ray features all of the supplements from that more robust version while the 4K disc is the movie only.

This second collaboration between Tom Cruise and Steven Spielberg proved to be yet another success at the box office. My personal feelings aside about the film’s ending, this really was good to rewatch again. The technical improvements on this 4K disc really do improve the overall experience. It really is a fun film.