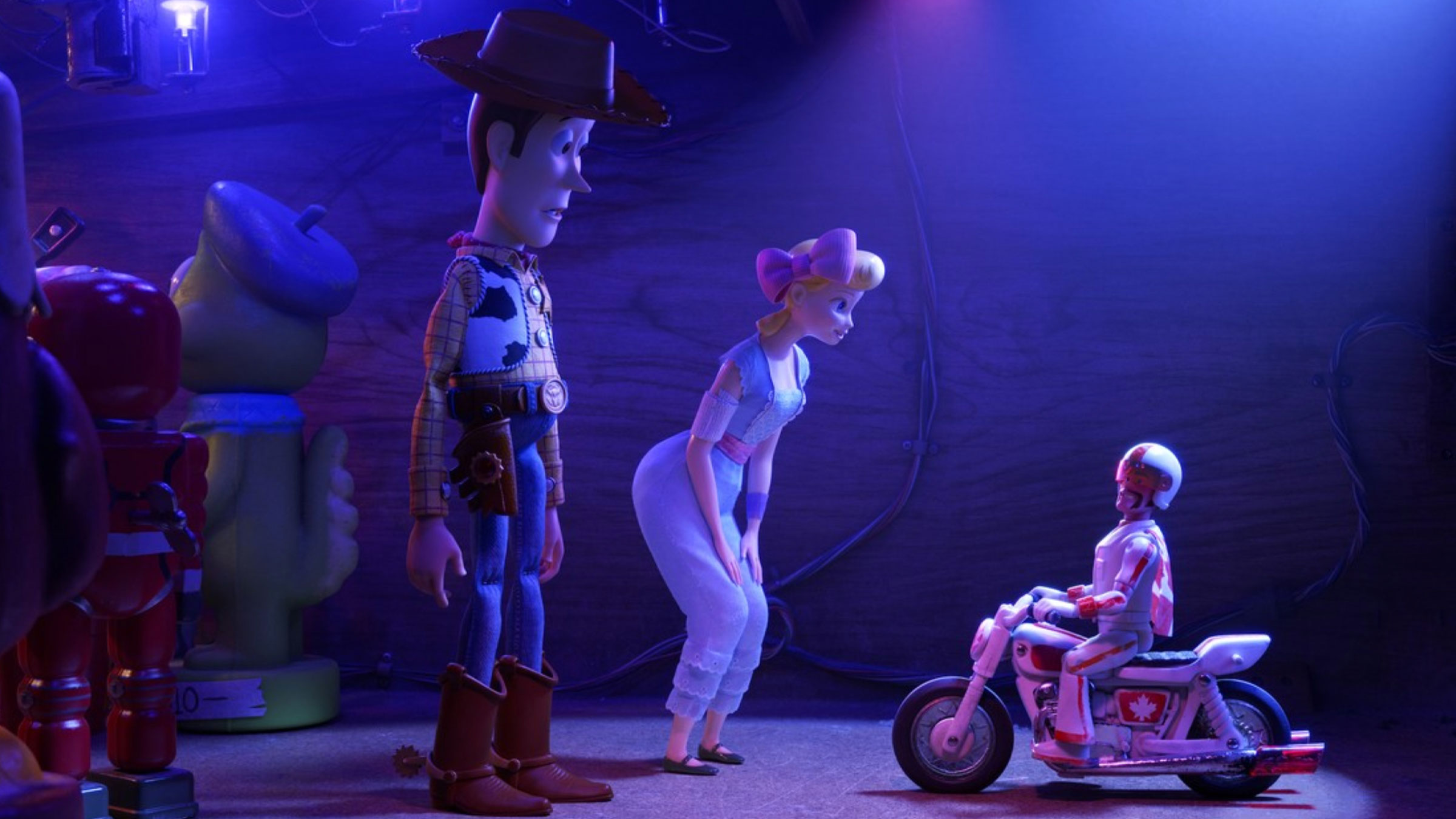 I was perfectly fine with the Toy Story series ending after the wonderful Toy Story 3, but here we are with the fourth chapter that felt necessary to some. I’ll come right out and say that I quite enjoyed this fourth chapter even if it didn’t move me like the third film did. Still, there’s a bit of an emotional punch at the end that it feels like an even more fitting closure even if at the end of the day it doesn’t feel wholly necessary. Disney still has something special here as it’s rare that an animated feature can get me teary eyed, but they’ve managed to do it twice now. It just shows that when you love the characters that you’re more inclined to go on the adventure with them.

As the film begins we cut back to nine years earlier where we see that Bo Peep (Annie Potts) and Woody (Tom Hanks) and the gang are rescuing RC as he’s trapped and the heavy rain is close to washing him away. Unfortunately, Bo Peep and some other toys are boxed up to be taken away. She tries to convince Woody to come along, but he hears Andy searching for him so he decides to stay. Now, back to present day, we see that the toys are donated to a younger child named Bonnie. It’s clear that Bonnie doesn’t love the toys like Andy did. At Kindergarten, Woody makes Bonnie a new toy. He collects a spork from the trash and now “Forky” is born. Forky tries hard and hard to throw himself away, but Woody insists, especially when he see how much Bonnie takes to the new toy. The plot then takes Bonnie and her family on a road trip on which Forky comes along as well as Woody to make sure he doesn’t try to dispose of himself again. Buzz (Tim Allen) and the rest of the gang come along. There’s a bit of a mishap which separates Woody and Forky from the rest of the gang. Eventually he is reunited not just with Buzz and pals, but also Bo Peep. We’re introduced to several other characters as well and some fare better than others, but they’re all likeable enough in their own way.

I wasn’t expecting to enjoy Toy Story 4 as much as I did, but it is mostly a winner. I say mostly, because there are a few pitfalls along the way. While I can appreciate the plot and that it attempts to offer something fresh, these characters work best together, not separated. There were times that I really started to miss Buzz and the others. While the pacing is quick, there are a few moments that it can meander a bit. It’s not a huge problem, but I feel more focus would’ve helped a bit. There’s an early scene that foreshadows it a bit, but this all leads to an emotional finale scene that did work me up a bit. It doesn’t attempt to elicit the same kind of response as the previous chapter, but it works in its own way. It has a nice message of letting go and resonates more than many live action films. That’s saying something right there.

One should only expect the best when reviewing a Pixar feature and this is no exception. The UHD has such a natural look to it. It’s so detailed that it appears very lifelike. Whether it’s Woody and Bo Peep up close, with solid details in the background or the whole gang of toys, it’s a visual treat throughout its running time. Sampling the Blu-Ray disc just for comparison sake, this 4K disc offers a significant improvement, making it an easy decision for those with 4K capabilities considering a purchase. I mean, you have the setup, why would you not want the best presentation to go along with it?

The Dolby Atmos track really adds to the experience as well. Vocals are crisp and there’s a lot going on to keep the track active throughout. There’s a wide range to the sound field and it really puts us right in the middle of the action. I saw the film in theaters and this sounds nearly as good. Like the transfer, I find nothing to complain about here.

This three disc set finds all of the supplements on the two Blu-ray’s included.

I really did enjoy Toy Story 4 and it only shows the power that Pixar has to make an entertaining fourth film when it was wrapped up perfectly and well past its prime, but they’ve managed to create something special. With that being said, it does feel a bit unnecessary, but this comes mostly from the wholly satisfying finale to the third feature. This one doesn’t seem to want to top that on an emotional level or even in scope and in some ways that’s a good and bad thing. I did get teary eyed at the end and that’s saying something when your characters are plastic toys. Hopefully they don’t try to stretch themselves too thin and let the series finally end here. Caveats aside, Toy Story 4 comes recommended.