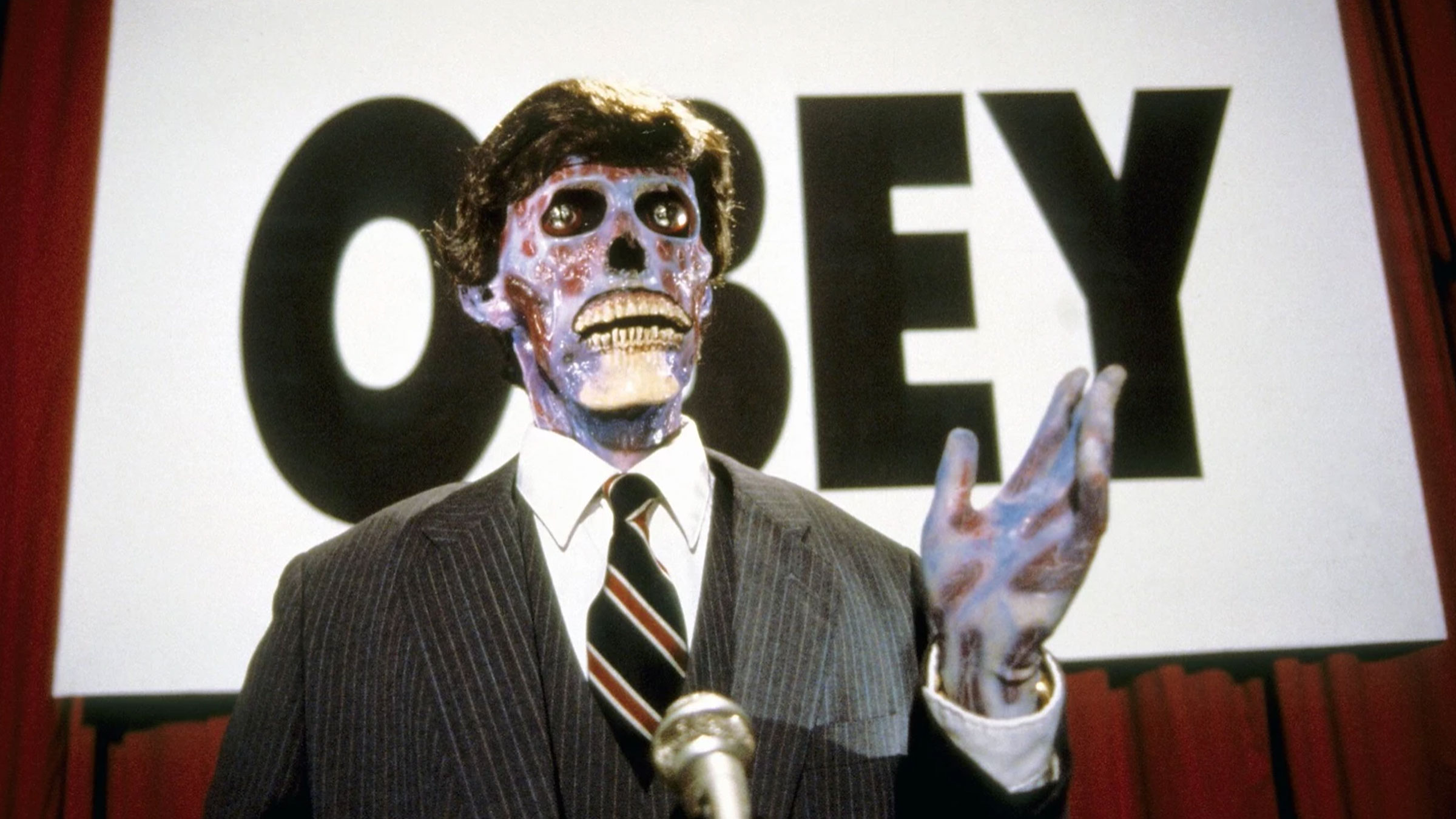 “Rowdy” Roddy Piper stars in this thriller, as a loner who falls into a much larger scheme of world dominance by alien forces. Piper gets a construction job, lives in a makeshift village, and finds out some of the other people in this village are part of an underground movement against the aliens. Piper finds a box of sunglasses in a dumpster, puts them on, and the world changes! Piper can now see the aliens, who look like normal people unless you are wearing the glasses. Piper can also see the messages hidden within signs, magazines, and hell, everything! Subliminal messaging gets whole new meaning after this one!

Needless to say, Piper fights back, and tries to shut down the alien empire. But will one great Scotsman triumph? Watch for yourself. Don’t dismiss this movie just because a former pro wrestler has the lead. Piper is perfect for the role, even if his acting is lean, because the role seems to fit his real personality like a glove. This flick is nothing but action and witty catch-phrases, just like all your favorite muscle bound hero vehicles. But this one has a decent story, and very catching visuals.

The scenes after Piper discovers the glasses are very moving, sometimes nearly disturbing. The phrases hidden under the alien’s guise are startling, and conspiracy buffs will love the whole theme. “Obey”, “Watch TV”, and my favorite, seen on money, “This Is Your God.” These are great, and the movie is very entertaining. Carpenter may be better known for other movies, but this is a sometimes overlooked gem. If you want suspense, action, and humor rolled into one movie, this is it. But, this is not a deep film, so what you see is what you get. But what you get is a fun movie, so give it a chance.

I remember watching the Blu-ray a few years back and thinking that it really didn’t look that bad. Well this new 4K version takes what they had and ups the ante. The main thing that really struck me was the detail.  Very sharp.  But not too sharp.  It’s really amazing how sharper focus and a more detailed image can really bring a movie from looking average to looking stellar.  Granted this wasn’t the biggest budget movie back in the late 80’s.  Colors are bolder and stronger as well.  Carpenter is one who’s actively involved in his films and his efforts have paid off here – this looks about as good as can be expected in 4K. It’s a knockout.

There are no shortage of audio tracks with this film. New is the Dolby Atmos track which packs a surprisingly good punch. Some atmospheric sounds add to the depth of this new track. We get a 2.0 stereo mix as well as a 5.1 mix.  Surprisingly the 2.0 mix is the one that I preferred.  Granted, the film was originally made with this stereo mix, so it does sound a bit more “natural” while the 5.1 mix does have a few moments where it sounds a bit fabricated.  Dialogue is relatively clear and free of distortion as well.  Though we don’t get any action out of the surrounds with the stereo mix, it’s of little consequence.

As good as the disc looks and sounds, nothing new has been included. What we get is what was present on the previously-released Blu-ray.

As much as I like Halloween, I have to say that this is probably my favorite John Carpenter film. And I don’t watch it enough. Then again maybe it’s because I haven’t seen it as much as some other films which is why I like it. It’s amazing. If the improved audio and video don’t reel you in – nothing will.