Nearly a decade ago I had a copy of Shaun of the Dead and had a review pile that was getting pretty deep. I took that copy to a friend of mine at work and he watched it and gave it back. I told him he could keep it only to hear him say “Dude, have you not seen this? Because you really should, I think you’d like it.” My eyebrow raised and I took the disc back home with me and it was then that I found one of my favorite movies of the last ten years.  Amazing how these things happen, no?  As we all know, Shaun of the Dead was a hit with critics and audiences alike and a few years later we were presented with Hot Fuzz, starring the two men who made Shaun of the Dead such a success.  Little did I know that these same two had a show called Spaced and it did somewhat explain a lot.  Moving forward, six years have passed since Hot Fuzz and we’re finally treated to a third installment of the Simon Pegg/Nick Frost “trilogy” with The World’s End. They’ve battled zombies, been cops and now are on a mission to have the pub crawl to end all pub crawls.  Need I say more?

The year is 1990 and Gary King (Simon Pegg) is a big deal. He’s got a carefree attitude, is good looking and the unquestioned leader of his group of friends.  That was then.  Twenty some odd years later Gary is still living in 1990 and can’t seem to let it go.  His friends have all gotten on with their lives, have good jobs, wives and children. Gary is still…a big kid.  He wants to get his group of friends back together to top their pub crawl from their past.  You see, they never finished it (for reasons that are colorfully illustrated) and it’s been bugging Gary.  So after a bit of convincing, Gary “gets the band back together” and it’s off they go.  They head back to their hometown and start downing the pints.  However as the day/night progresses, there’s something a bit different about the town and they can’t seem to put their fingers on.   I won’t divulge what that is else it’d ruin the movie, but suffice it to say that this the events of this night are much more than a pub crawl.

Director Edgar Wright and starts Nick Frost and Simon Pegg know what audiences want – more of the same.  The chemistry that made the first two films such a success is still present and with The World’s End, we are treated to more of the same.  That’s a good thing.  Having now seen all three “installments” of this trilogy, I’d have to say that Shaun of the Dead is still my favorite. I do have to say that there’s an element of truth in this one, though. I find it amazing how some people do tend to live in the past and it’s kind of sad. Yes, no one really wants to grow up, but it’s something that we all have to do.  Simon Pegg embodies Gary like no other. And while Pegg has had more mainstream success as an actor (he’s Scotty in the new Star Trek movies for starters), I’m glad to see that he’s still willing to return to his roots and give audiences more of what they want.  I think we could watch these guys do anything, be it killing zombies or drinking their sorrows away.  The World’s End delivers pretty much what it advertises, so a recommendation is mandatory.  Cheers!

The most recent entry in this trilogy, The World’s End looks a tad bit better than its Blu-ray predecessor and thanks to the 4K, the HDR offers some more depth and color.  The film starts out in the late afternoon and finishes up at night and never once is the image challenged. Black levels remain strong and consistent throughout, flesh tones look warm and natural, well natural for pale-skinned Brits anyway.  Detail is amazing, we can see the whiskers on Simon Pegg’s face, the crows feet around his eyes and the individual strands of hair.  Contrast works well and I saw no evidence of banding.  Put bluntly: this looks just how we would think it would.  Universal has done a bang up job with this and it shows.  No quarrels here!

At the risk of giving anything away, I will say that though this is a comedy, don’t expect it to sound like one.  No, the “twist” in the movie makes way for some pretty intense and robust sound and the included Dolby Atmos soundtrack does an excellent job.  Vocals are rich and strong, surrounds are used a lot in the second act and the LFE will come into play.  As I said, this is not your typical comedic mix.

Unfortunately there are no new supplements included in this 4K release, but the Blu-ray was pretty loaded down with them to begin with.

Fans of Shaun of the Dead and Hot Fuzz (or any Simon Pegg movie, actually) will get a kick out of this one. Yes, it’s a bit darker than Shaun, even considering that one dealt with the undead. Still, for those that want this in 4K – the wait is over. 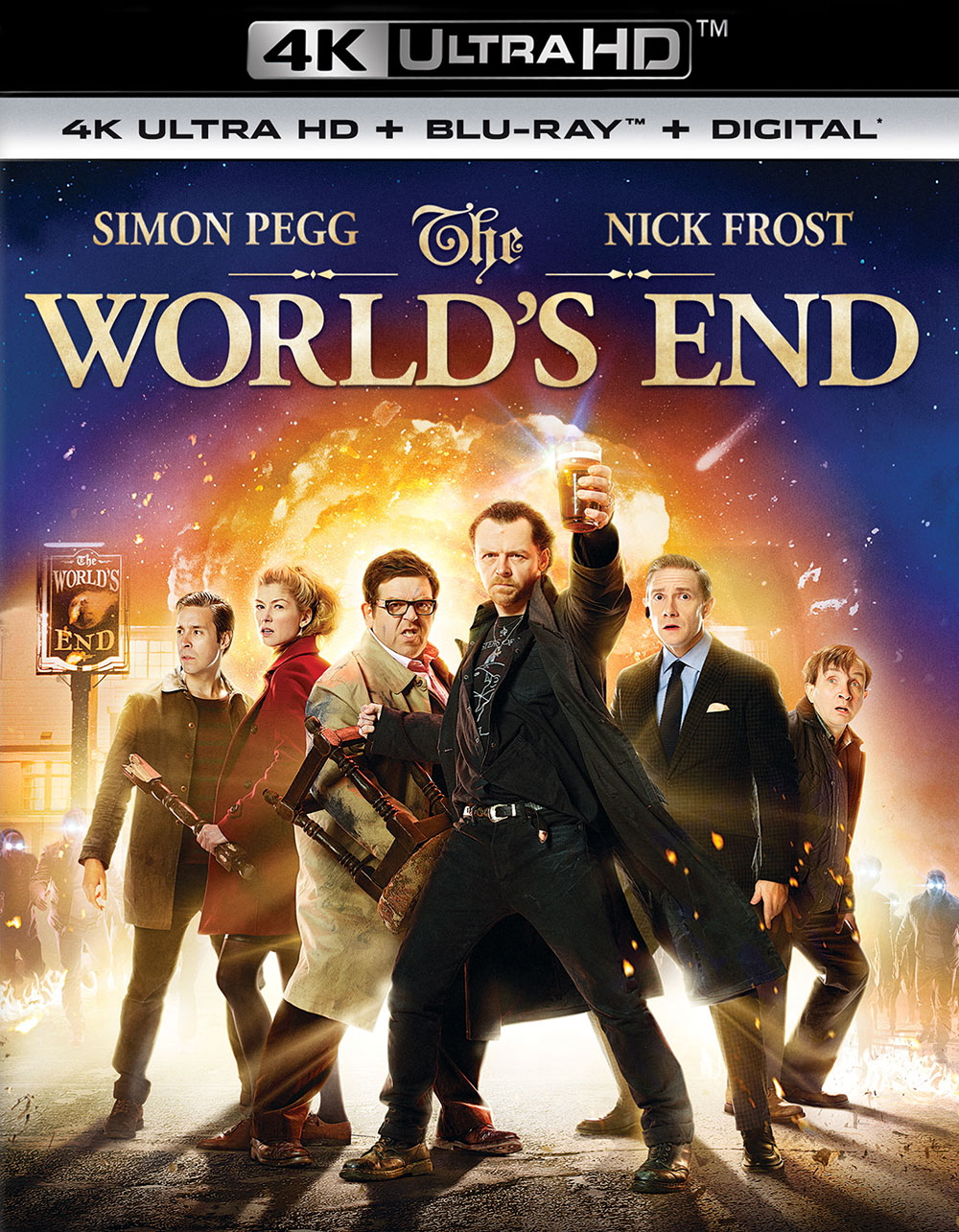