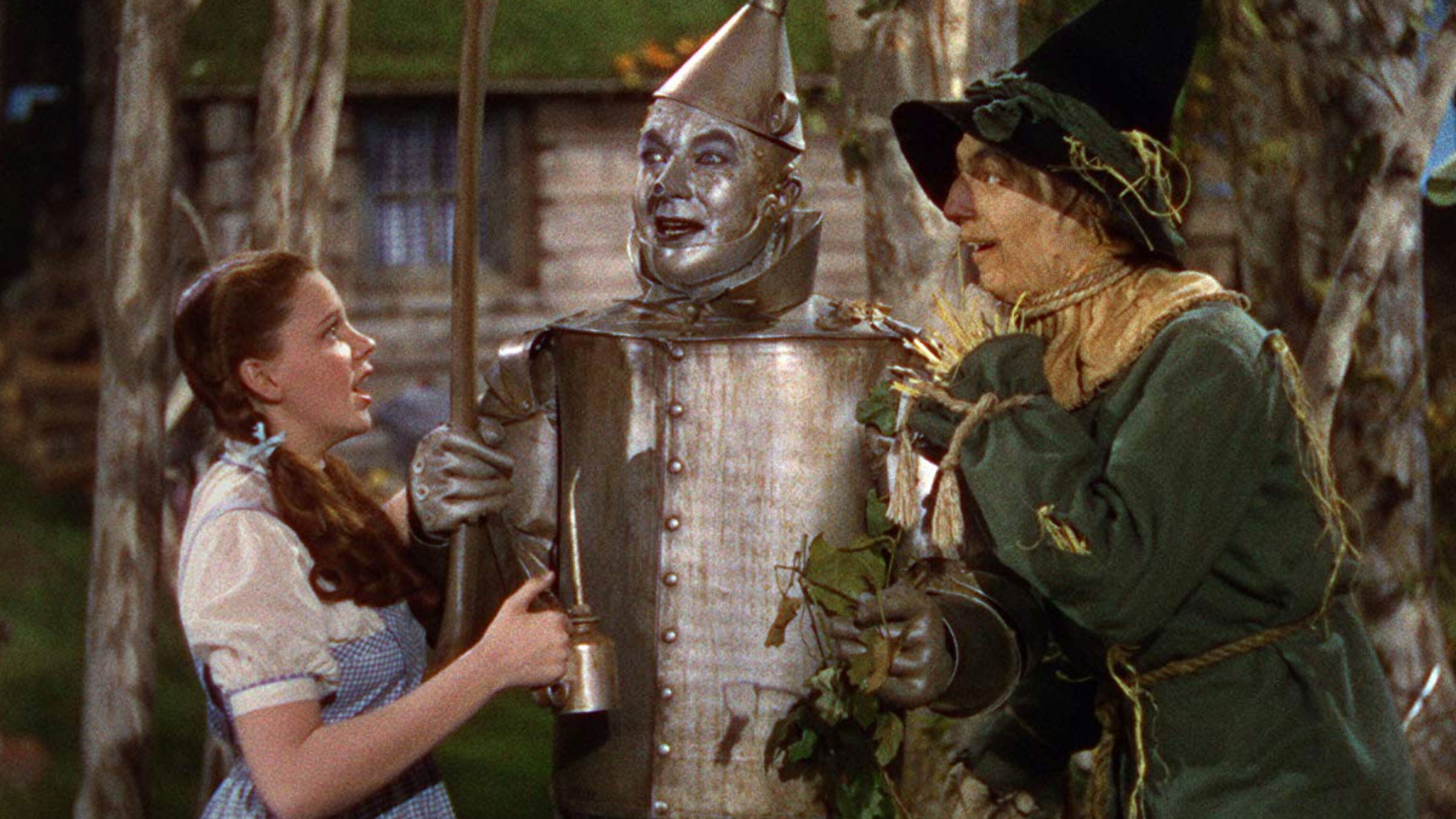 I’m a Kansas man. I graduated from Kansas State University. I lived in both Kansas City and Wichita and both of my parents hail from Kansas to boot. Suffice it to say that I’ve heard every “Dorothy” joke there is and then some. Oddly enough, though, I’ve never been in a tornado and let alone even seen one. Sure I’ve been in warnings and tornadoes have been nearby but, I missed out on one of mother nature’s most interesting disasters. Regardless, this isn’t “The Discovery Channel” and I’ll leave all talk of tornadoes relegated to the movie in question. And speaking of the movie in question, everyone should take 100 minutes out of their lives to see The Wizard of Oz. It’s unquestionably one of my all-time favorites and literally a movie that every single person with access to a TV and/or movie theater should see. It’s hard to believe that it’s now been 70 years since the movie first came out in theaters and though not the first movie to sport color, arguably the one that everyone remembers. Add to that the year 1939 was widely regarded as one of the better years for films with movies like Gone With the Wind, Mr. Smith Goes to Washington, Wuthering Heights and this little gem all being released. The Wizard of Oz is truly one of the great studio movies and it made a young Judy Garland a star.

For the three people out there that haven’t seen the film, I’ll do a breakdown of the plot. I will say that the movie is so ingratiated in our culture, you’ve undoubtedly heard of some of the lines even if you’ve never seen the film:

Dorothy (Judy Garland) is a schoolgirl living with her Auntie Em (Clara Blandick) and three farmhands (we’ll see more of them later). She’s swept away in a tornado and awakens in a wonderful and magic land. She’s also managed to kill the Wicked Witch of the East as her house landed on her. Dorothy and her dog, Toto, want nothing more than to get home but they’ve no idea how. Glenda (aka “The Good Witch of of the North”) points Dorothy in the direction telling her to follow the yellow brick road. By doing this, she’ll eventually find the Wizard who will be able to send her back to Kansas. Now that’s just the beginning as along the way Dorothy meets up with three comical characters who look strangely familiar to her. A Scarecrow (Ray Bolger) who longs for a brain, a Tin Man (Jack Haley) who wishes he had a heart and a cowardly lion (Bert Lahr) who desires courage. Together the four of them (five if you count Toto) journey along the yellow brick road meeting pitfalls along the way. Will Dorothy and the gang make their way to Oz and find a way back home or will they be stranded forever?

The movie was adapted from L. Frank Baum’s novel of the same name, but unquestionably the movie far transcends the book. The story is known to most anyone over the age of three or above and the film is perhaps one of the most fun musicals to watch (though I still prefer Singin’ in the Rain). Chances are that The Wizard of Oz will still be a classic 70 years from now and hopefully it will continue to entertain generations of movie-goers to come. This is a movie that I still watch at least once a year and at least one of the networks airs it as well. The story of Dorothy and Toto is about as timeless as it gets and even though you know what will happen at the end, the journey is certainly worth it.

It’s hard to believe that this film can continue to look better. Granted, technology is the culprit, but you’d assume that at some point in time we’ll have reached our limit. This new 4K version is easily the best the movie has ever looked and with the addition of HDR, several scenes have visuals that I’d simply have to classify as “eye popping.” The opening of the film is shot in a sepia tone with brown hues, but the real treat is seeing the colors leap off the screen in the land of Oz. From the shiny metal exterior of the tin man to the emerald green of the castle of Oz (and everything in between), the transfer exudes everything that’s right about high definition. I’ve also read some comments and evidently some folks don’t know that this movie came out about 15 years before the advent of widescreen movies – the first being The Robe with Richard Burton. So when you pop this disc in your 4K player, it won’t fill up the entire 16:9 screen. There will be black bars on the sides. I know this sounds a bit rudimentary, but I have to understand that not everyone out there is as familiar with the history of film as I am. In a nutshell, this transfer is about as glorious as they come.

Nothing much has changed with the film DTS HD Master Audio mix, though a few scenes have been tweaked.  And as impressive as the image is, the audio is right there with it. The film, by and large, is a musical with such classics as “Somewhere Over the Rainbow”, “We’re Off to See the Wizard” and “If I Only Had a Brain”. The soundtrack gives an unparalleled depth that I’ve not heard in any previous release. The case with movies of this age is that the dialogue will sound hollow and artificial and this really isn’t an issue here. Granted this is probably one of the most coveted titles in Warner’s catalog and they have the resources (cash) to flush out such inadequacies, but it’s money well-spent. The soundtrack sound rich and crisp that’s strong, yet not in the way that some of our modern soundtracks are. For a movie that’s 75 years old, it’s never sounded better.

This two-disc set doesn’t have as many supplements as earlier versions, but it’s nice to see a few included on the 4K disc.

If you have the two-disc 75th Anniversary edition of the film, then you have the second disc of this 4K set. It’s the same. But since this is The Wizard of Oz we’re talking about here, let’s get started!

There are movies and then there are films. The Wizard of Oz is the latter. It’s a title that most likely has been, should and will be on every movie-lover’s shelf. It’s hard to believe that they can continue to make this movie look better, but they do. I shouldn’t even have to list why you need to own this – just get it. It’s quite possibly the perfect movie and it’s never looked better.