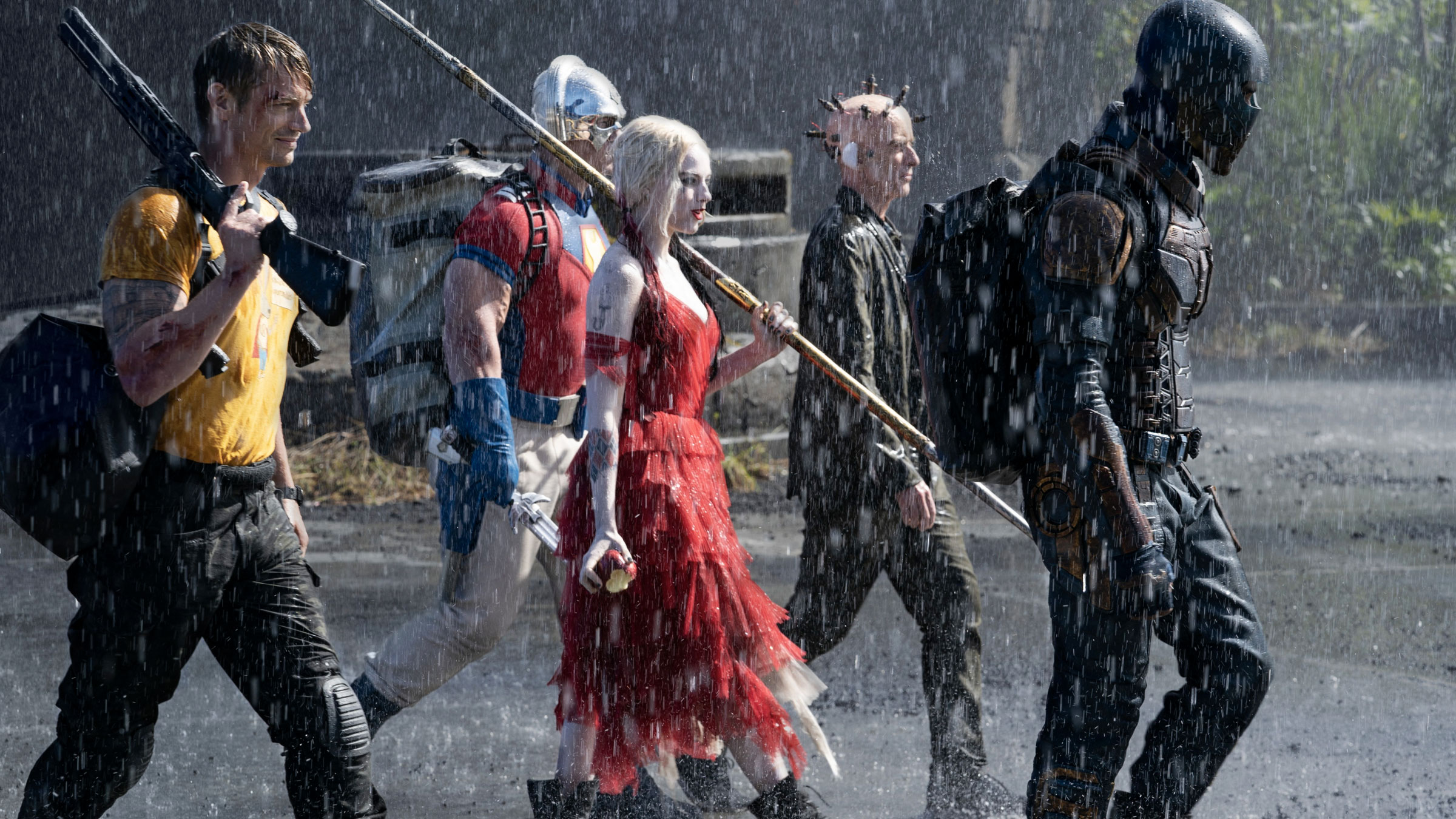 When it comes to the DCEU (Extended Universe) the various films have been hit and miss. But, to their credit, they’re trying and they’re getting better. 2016’s Suicide Squad had high expectations and it brought Margot Robbie’s Harley Quinn front and center. Her performance was amazing, though it was the standout of the film. That and Jared Leto’s Joker was a one off that really didn’t make a lot of sense. Flash forward a few years and we now have James Gunn (Guardians of the Galaxy) at the helm as both writer and director. This was a good move. He brings his usual flare to the role and has assembled the most random cast of characters that even a comic book geek like me had to look up. This isn’t a sequel and only a few characters reprise their roles from the first installment, Viola Davis as Amanda Waller as well as Margot Robbie in her iconic role as Harley Quinn. Locked and loaded – let’s get crackin’…

Amanda Waller (Viola Davis) is the head of a covert government operation that brings together the most dangerous criminals for the most dangerous missions. She assembles a team to go to Corto Maltese, an island in South America, where an alien lifeforce is being harvested for potential use against the USA. Among the ragtag group of felons are Bloodsport (Idris Elba), Peacemaker (John Cena), King Shark (voiced by Sylvester Stallone), Ratcatcher 2 (Daniela Melchior), Polka Dot Man (David Dastmalchian), Col. Rick Flag (Joel Kinneman) and, of course, Harley Quinn (Margot Robbie). That’s the mission, but it takes somewhat of a backseat to the characters on screen. We take time to get to know them, their quirks and how they all understand one another. But it culminates in an all out battle and fans of the Stay Puft Marshmallow man from Ghostbusters will certainly enjoy.

The thing about this film isn’t so much what happens, but how it happens. We see things from a different perspective and the movie is a lot darker than I expected. It’s a valid point to think of this as the DC version of Guardians of the Galaxy, but with a much rougher edge. Bear in mind that Gunn brought us Kick-Ass in 2010 and that one wasn’t exactly easy on the stomach. Couple this with the cast, who I really liked. I’ve never been too much a fan of John Cena, but he nails his role. And it’s hard to fault Idris Elba for any role he takes. Truly his presence takes things up a notch (and when he found out that Gunn was attached, he was in with no questions asked). Then we have Margot Robbie who’s not in the film as much as we’d think. Still, add it all up and it’s entertaining to say the least. I’m sure we’ve not seen the last of this motley crew. And that’s good.

Anyone who’s seen any of Gunn’s films knows that they have a certain visual flare that accompanies them. That’s a good thing, if you ask me. I’d previously seen this on HBO Max and after seeing the disc, 2.39:1 4K HEVC image isn’t compromised in the least. And, let’s face it, when you’ve got a 300 foot starfish terrorizing a city, you want the utmost in clarity, no? Simply put, there’s nothing to complain about. Margot Robbie’s Harley Quinn has had a few tattoos removed, but her stark white skin still glows, I felt I could count the number of grey hairs in Idris Elba’s beard and without giving too much away, I lost count of the number of body parts strewn around the screen. Suffice it to say that this is one interesting watch and it looks absolutely stunning no matter which format you choose to view it in.

The included Dolby Atmos mix is nothing short of exemplary. And having said that, the mix pulls no punches. Thing blow up (mainly people), buildings crash and everything in between. Subtle, atmospheric effects fill the room with sounds that make the head spin. Vocals, as expected, are clear as day. This one won’t disappoint.

2016’s Suicide Squad was, mainly, trashed by critics but did manage to pull in over $300 million worldwide. This new film serves as somewhat of a soft reboot of that one and somewhat of a sequel, though it’s a very loose interpretation. There’s no shortage of talent (or violence) but for those that like Gunn’s offbeat style – it works.