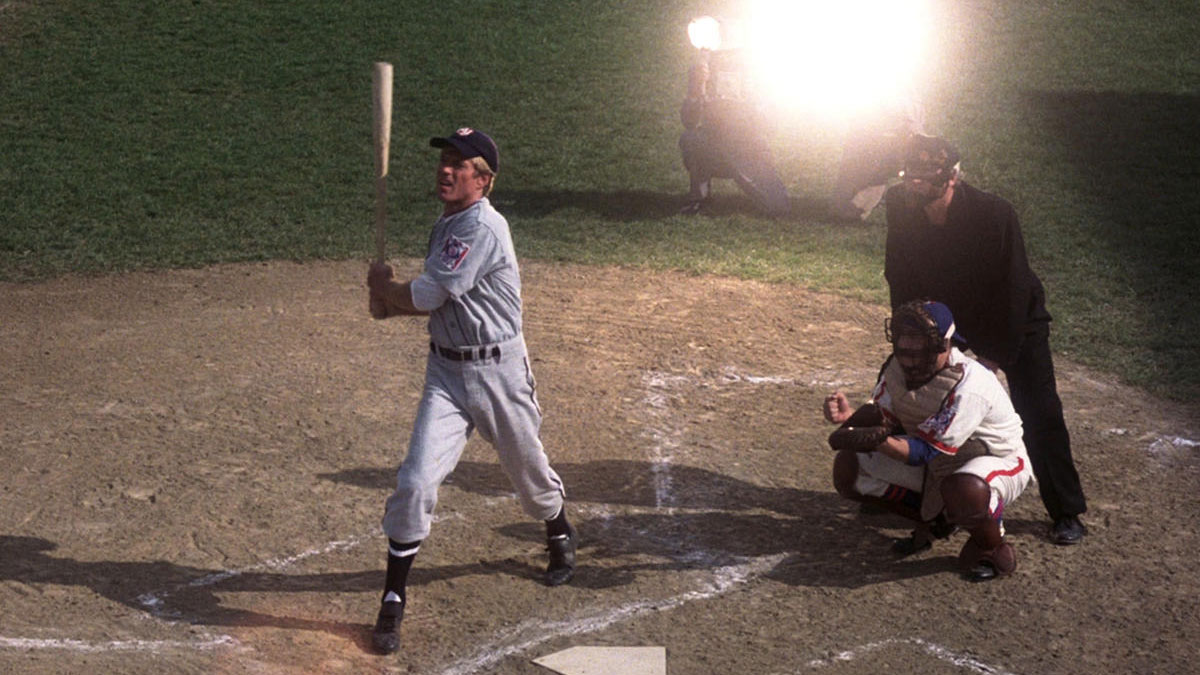 Few players have the kind of raw, natural talent that Roy Hobbs (Robert Redford) has; a man born to play baseball and be known as one of the greatest to ever take the field. He even has the love of his life in his corner, so when he heads to Chicago to take the sport by storm, success seems to be a given. But things don’t go as planned and Hobbs discovers he does have weaknesses, ones he never imagined. While some would accept defeat if faced with what Hobbs faced, he pushes on and sixteen years later, he is given another chance. He has tried his best those sixteen years, but until now, the door to the big leagues was closed and even now, he is with the New York Knights. The Knights are the basement dwellers of the majors, but to Hobbs that isn’t a concern, he just wants a shot at proving himself. He was brought in to further sink the Knights and allow The Judge to take control of the team, but with his special bat in hand, Hobbs is prepared to create miracles. But to take his place in history and be the player he dreams he can be, he will have to overcome what stunted him sixteen years back. As Hobbs stands on the threshold of legends, will he seize greatness, or endure another implosion?

The Natural is often called one of the greatest sports ever produced, but director Barry Levinson has tinkered with his movie and given us this new Director’s Cut. If you just glance at the running times, this version only runs a handful of minutes longer, but this isn’t just some added footage. Some scenes have excised, new ones added, and some respun, to combine for a decent amount of new stuff. Levinson hasn’t reinvented the wheel however, The Natural still looks and feels like the same movie, just with some things more fleshed out. So some characters get a little more time, a few arcs are given more room to shine, and the Roy Hobbs character comes off as more isolationist than before. I can see why fans would be split as to which version is the best, but I suspect most will stick with the original theatrical edition. Sony has piled on some substantial extras to tempt the doubters however, so there is some value here even beyond the new cut of the movie.

I’ve always found The Natural to be one of the better-looking films and I know that sounds odd. “Period” movies, to me, seem to just have a certain look about them. However whatever Sony did with this disc, it worked. Having seen the film about two dozen times, I found a texture and clarity that I’ve really not noticed before. Fabrics in clothes and the baseball uniforms seemed to stand out. Skin tones seemed even more detailed and even things like the fans in the bleachers had more definition. Sony’s 1.85:1 HEVC 4K image is the stuff dreams are made out of and, I have to say it, they knocked it out of the park with this one.

A new Dolby Atmos soundtrack is a welcome addition here, though the movie is a far cry from others that feature the track. The surround use is by no means powerful or even that noticeable, but I think that is good in this case. I found that it sneaks out there and immerses the audience, creating solid atmosphere throughout. This is the kind of presence you know is there, but don’t really think about, it just helps pull you into the experience. The music sounds good too, no real problems to mention. I found no concerns with dialogue either, just clean and clear vocals at all times. The film has never sounded better or more pure.

This is a two disc set with the extras from the previously-released Blu-ray found on the second disc with only two supplements found on the first.

For many, The Natural is considered the best baseball movie ever made. I’m a bit more partial to Field of Dreams and, more the point, Major League. Yes, I know they’re apples and oranges, but I’ve got a right to my opinion! I will say that this movie does withstand the test of time and Redford is never better. Sony’s new 4K disc gives us most anything we could want with a spectacular picture, upgraded audio and the Director’s Cut all on one (ok, two) discs.