Summer films are often hit and miss. Superhero event movies show up, make their billion dollars and quietly disappear only to await their Blu-ray/4K release date. Other films aren’t so fortunate. Perhaps they’ll find new life On Demand? And then there are those that no one expects to do well and they do. You know the ones: My Big Fat Greek Wedding, The Blair Witch Project and movies about a giant prehistoric shark. And yes I know that not all movies are relegated to Summer. But when you put Jason Staham in a movie, there’s only a certain amount of drama to expect. Throw in a shark, a ragtag crew (complete with women, children and a dog) and what have you got? Well, you’ve got The Meg. And no, it’s not a Family Guy reference.

Yes, there is a plot and this isn’t just another shark movie in which the shark attacks anything that movies. Actually, wait a minute. Ok, that’s exactly what this is! The film is centered around a high-tech underwater research facility funded by billionaire Morris (Rainn Wilson). A few members of the crew have managed to take a submersible past what was thought to be the deepest part of the ocean (the Marianas Trench). But while down there the sub is hit and damaged leaving them stranded. Enter former deep-sea rescue diver/alcoholic Jonas Taylor (Jason Staham) as he’s called into save the day. As we quickly find out, the trouble-maker is none other than the Megalodon (aka “The Meg”), a prehistoric 80 foot shark long thought to be extinct. Jonas manages to save the crew, but not before leaving a path for the shark to make its way to the surface. The goal: stop the shark before it hits the mainland and, of course, eats everything in sight.

The film’s strength lies in the ability to make fun of itself. The Meg knows what it is and embraces it. There will likely be no Academy Award for The Meg other than perhaps a nomination for sound. And I’m willing to bet that the filmmakers are just fine with that. The cast is recognizable and I won’t mention a few of the names that you’ll see (and may not see for long), but this is all Statham’s show. He’s fine with it and so are we. I will admit that with movies of this genre (a surprisingly long list, actually) I prefer Deep Blue Sea. In that we have genetically-engineered sharks financed by a billionaire played by Samuel L. Jackson. No matter, movies like this are means to be enjoyed and let the viewer have a good time. And that’s exactly what this does.

This is a new to the format film from a major studio and, as such, the expectations should be high. Though a lot of the action takes place with some underwater shots, we are treated to an extremely g00d-looking movie. The 2.40:1 HEVC 4K image looks the part with razor sharp detail and HDR which gives the sea a bit more of a majestic look. Majestic? Yep. Why not. Flesh tones are spot on, contrast (especially those in the water) isn’t challenged and when compared to the Blu-ray counterpart, it’s a nod to how good a 4K movie can look. Perpetual 5 o’clock actor Jason Staham’s beard is on full display. Go on, I challenge you to find the last time that guy was clean shaven. Add it all up and you’ve got yourself a winner. Of note, the movie is available in 3D and I wasn’t really able to find any instances in which the movie “looked” like it was playing for that effect. Either it’s really well done or the 3D is a joke. Regardless, it’s not included in this set.

When one of your main characters is an 80 foot prehistoric shark, I’m willing to bet that you’ll want to turn the volume up as high as it can go. Do that. Let me know how that works out. But if you value your hearing, the Dolby Atmos track will take every one of your speakers and make sure they earn their keep. Screams, underwater sounds and vocals all sound excellent. The atmospheric mix really encompasses the viewer and provides a nice 360 degree sound stage. The Blu-ray doesn’t miss out on the action either as it contains the same Atmos mix as the 4K disc. All in all a fun and immersing experience.

There are films that take themselves too seriously and there are those that are meant to be taken seriously. The Meg fits in neither category and that’s the way it’s supposed to be. Part of the fun of films like this (and this genre) are that they allow you to sit back, relax and enjoy the film. Is this yet another reason to not go in the water? Yes. But Jaws ruined that for us over four decades ago. Fans of B-Movie horror will be enthralled with this one. And judging by the film’s box office, there are a lot of you out there. That’s good. 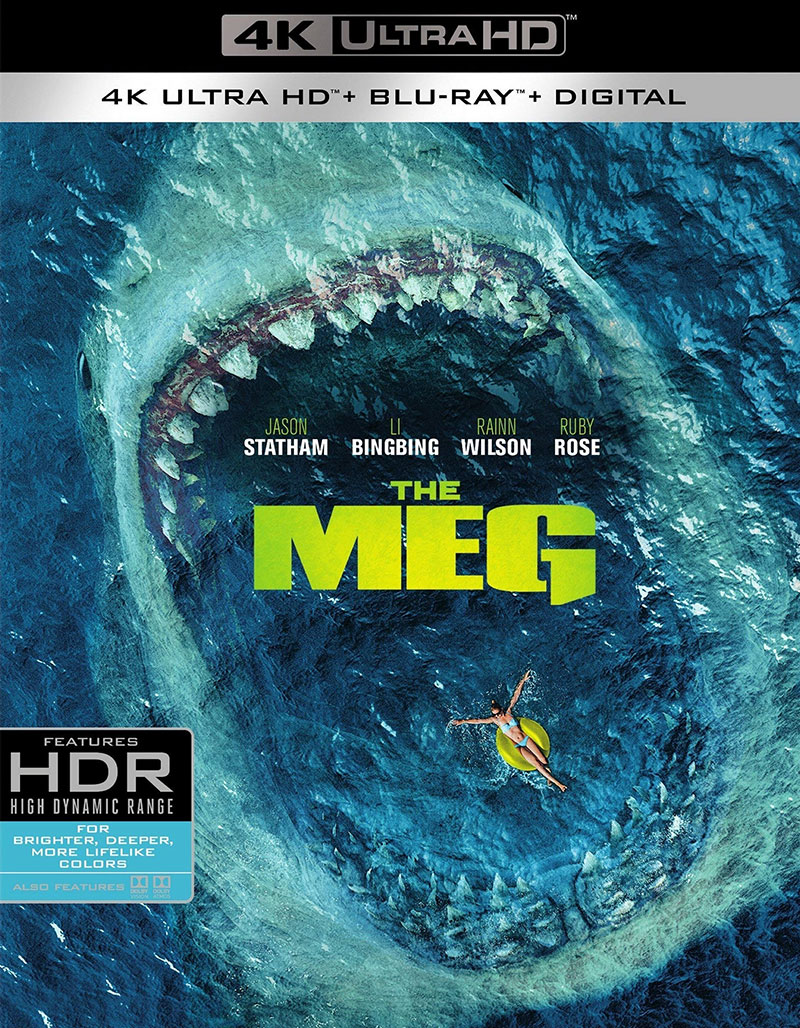