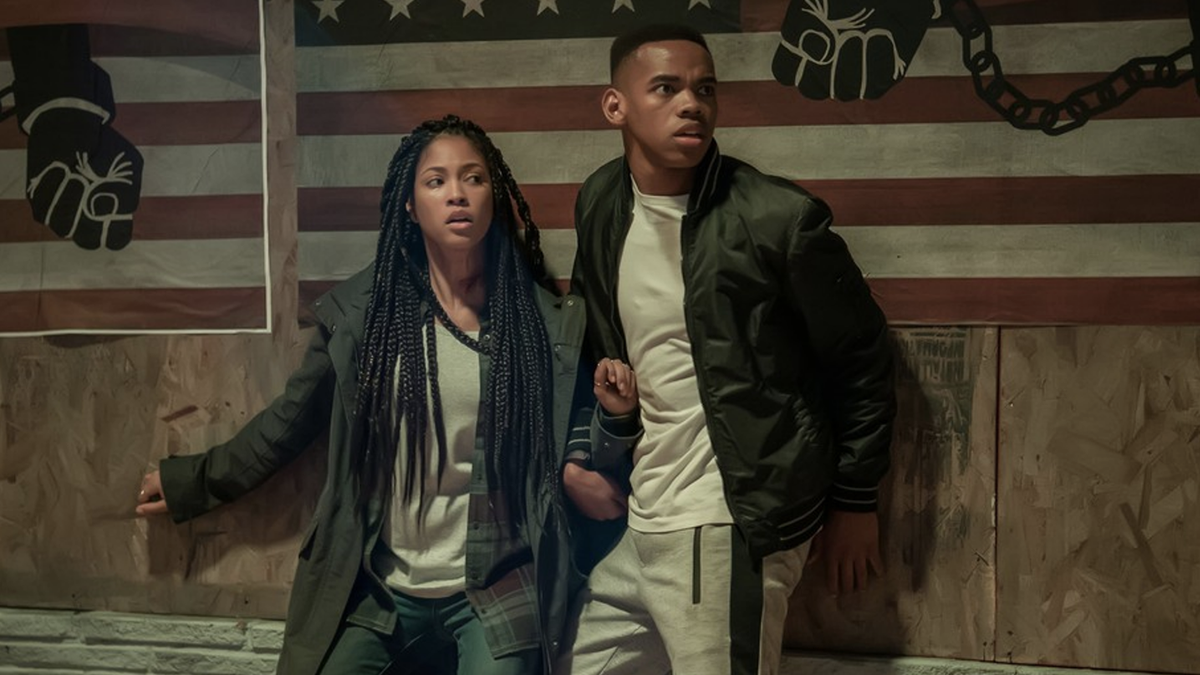 I don’t think we’ll ever see the day when crime is non-existent and if we do, I highly doubt it will be because of something like “the purge.” For those unfamiliar with this series of films (and TV show), here’s the basics.  The films are all set in the near future where the crime rate is at an all-time low. Why is this? It’s because the government has allowed one day a year, for a period of 12 hours, all crime is legal. You can murder, loot…whatever you want to do with no consequences. After the time is up things return to normal. Three of the films followed this and the results were pretty good. I’ve only seen the first one, the aptly-titled The Purge, but there are two others: The Purge: Anarchy and The Purge: Election Year. The First Purge is a prequel, which dictates how this came to be.

The NFFA (New Founding Fathers of America) are now in charge of America’s political landscape and change is coming. Dr. Updale (Marisa Tomei) proposes a risky experiment which eventually comes as we all know it – the purge. Set to take place on Staten Island, the residents are offered a monetary incentive ($5,000 to be exact) to stay and “participate.” We meet Dmitri (Y’Lan Noel) becomes aware of this, he suspects the worst. The story also follows community activist Nya (Lex Scott Davis) and her younger brother Isiah (Joivan Wade), the three take to the streets to save their own lives and do whatever they can to avoid “the purge.”

James DeMonaco, the director of the first three Purge films is on board as the writer and executive producer and Gerald McMurray has taken his place behind the camera. And it’s a change that’s noticed. I was a fan of the first film with its low budget roots and simplistic design. That and I’ve always been a fan of Ethan Hawke. And while I’m not opposed to prequel’s in general, this seemed a bit unnecessary. Though I have to thank Star Wars: Rogue One for finally patching up a thirty year old plot hole. Was it worth it? I think so. There’s nothing too terribly wrong with The First Purge, it feels like a mixture of Boyz N’ the Hood with a bit of Menace II Society and a pinch of The Hunger Games thrown in. Make sense? Didn’t think so. Stick to the first three. You’ll be glad you did.

I have to admit that I was pretty amazed at how good this film looks. Though I wasn’t too big a fan of the movie itself, it simply looks gorgeous on 4K (and the accompanying Blu-ray isn’t far behind). The movie, as one might expect, is new to the format and dark, dark, dark. The purge takes place at night and we’re treated to the darker side of the color palette (don’t read anything into that). The 2.39:1 HEVC 4K image never falters. Detail is razor sharp and even the wider shots showcase a level of clarity that I’ve rarely seen before. The additional HDR brings a bit more color depth than the Blu-ray, but either way you go this is one good-looking film.

Likewise, there’s a lot of action going on here. The DTS X mix brings an added layer of atmospheric energy to the purge and it’s felt in several key scenes. Bullets fly, knifes slice flesh and things blow up. And it all sounds pretty darn good. The LFE have several key sequences in which they add some fuel to the fire as well. Vocals are strong, spot on and accurate. I could go on and on, but suffice it to say that on a technical level, both the audio and video deliver.

The Purge line of films make money. That’s why they keep making them. Will we see more? I’d say so. While the technical specs on this are off the charts, I just didn’t really feel a connection with this film. I think I need to go and watch the two I missed, but fans of the series won’t have a problem adding this to their collection.