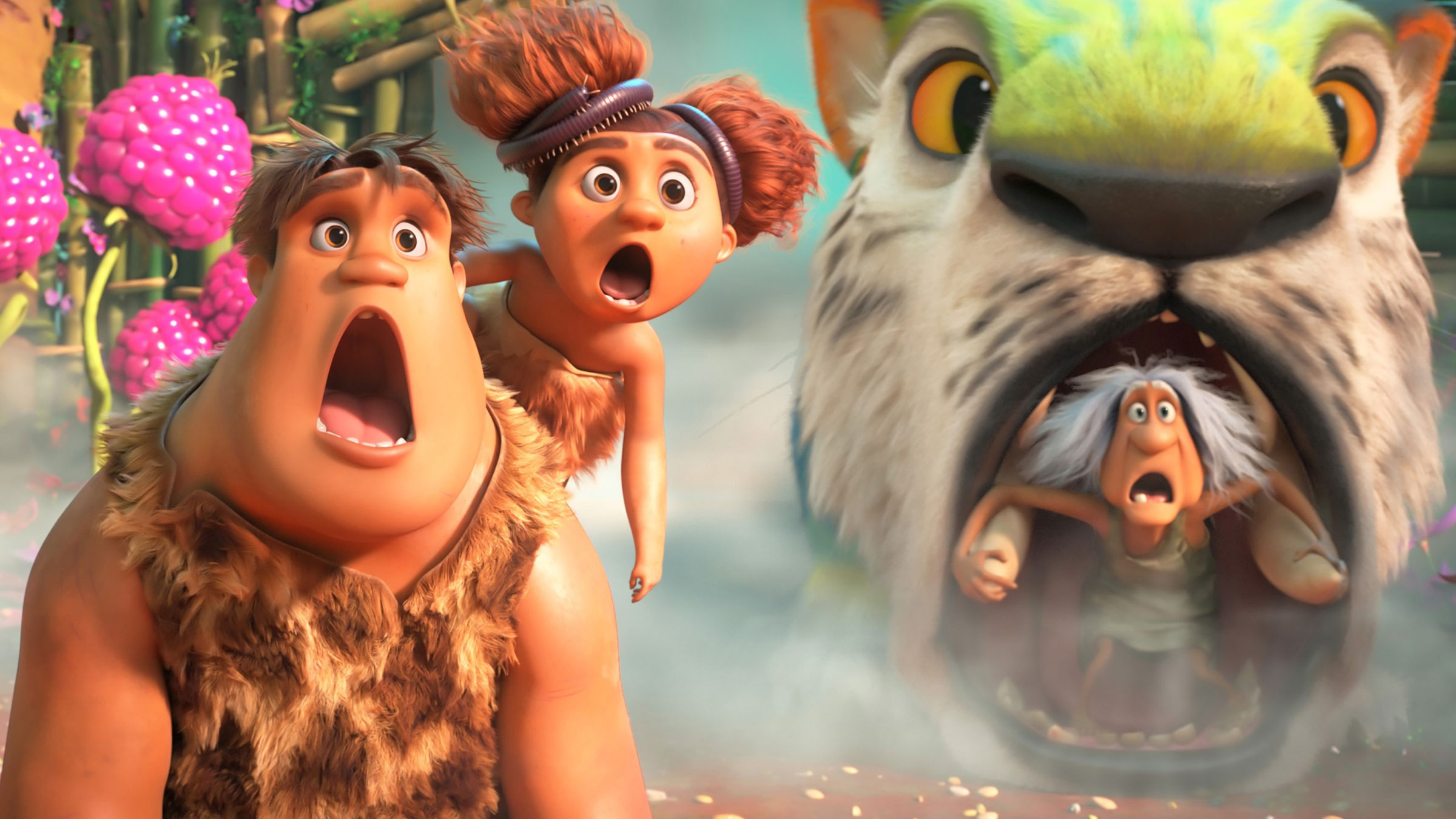 Full disclosure: I never saw the original The Croods even though it looked decent enough. I don’t bother as much with animated features unless there’s a unique spin or it’s a Toy Story sequel since the original film still holds a special place for me. You might wonder why I would take on reviewing duties for the sequel. Well, being snowed in isn’t fun, so this at least gives me something to do. While theatres might still be closed in many areas, I am fortunate enough to live in a town where they’re wide open. I bring this up, because this very film was one a friend and I were close to seeing on several occasions, but we both kept talking the other out of it. With that being said, I have now seen it and have my thoughts. Let’s get to it, shall we?

Once again Nicolas Cage returns to lend his voice as well as Kat Dennings, Emma Stone and Ryan Reynolds. We begin with a flashback showing the death of Guy’s (Ryan Reynolds) when he was a kid. We find the Croods now looking for a place to settle down. Grug (Nicolas Cage) has the mentality that he is an alpha male, so this can create a bit of drama with Guy, who is the outsider, but attracts more attention. Guy’s parents, before their death in the opening sequence, tell their son to search for a place call tomorrow3. That is where he finds the Betterman family. It’s interesting to see for Guy that their way of life is far more sophisticated than he is used to. There’s an abundance of food as well as exciting technologies. We have a lot of characters to toggle through here, and this does help move things along. I was never bored during this even if I can’t say it’s one of my favorite animated outings. It all builds towards a hectic climax which seems to want to make sure we get our money’s worth.

As mentioned, having not seen the first Croods, this still offered enough for me to see why the youngsters will like it. I can rightly say my youngest nephew adores the film. I also liked some of the comparisons to our modern world. When Grug doesn’t want his son to stare out the window in fear that he will get too much screen time, this is obviously comparing to today where kids play on their electronics for many hours a day. It has those little touches that keep things interesting for adults. Well, just interesting enough I should say. There was just enough here to keep my interest, but it isn’t a feature I find myself returning to. The visuals and voice cast give it their all, though.

Ok, who are we kidding – we all know this will look amazing. A brand new (to the format) 4K movie created entirely in the digital realm? Uh…yeah. It looks amazing. Or I guess considering the content, I could say that it…rocks? Sorry, had to. Suffice it to say that there’s nothing to complain about here. This is quite possibly one of the more colorful films I’ve seen in quite some time. The 2.39:1 HEVC 4K image simply never suffers. At all. Colors pop off the screen, black levels are stark and dark and anything and everything else that could have constituted an error – didn’t. This is perfect.

I’m always a fan of any movie that has a Dolby Atmos soundtrack. Why, you might ask? Well for one, I spent a lot of money on a receiver that was capable of handling this new atmospheric sound mix. And some more still on some new speakers so that it would put me right in the middle of the action. So when a movie comes along that justifies my hard-earned cash I relish it. I relish it I tell you! And, The Croods: A New Age never relinquishes with it’s veritable onslaught of sonics. Vocals are sharp and strong (I always make a game of trying to guess which celebrity voice goes with which character, then I get frustrated and look at the credits). Surrounds are constantly churning away and the LFE get some time to play as well. Turn it up on this one folks, especially if you have a Dolby Atmos receiver. And even if you don’t.

With a willing voice cast, plenty of action and some strong visuals, The Croods: A New Age will no doubt please the target audience. Adults could go either way, but there are enough little bits in here to keep them from drifting too far away. While it doesn’t resonate with me the way the Toy Story films do, it didn’t disappoint me either.