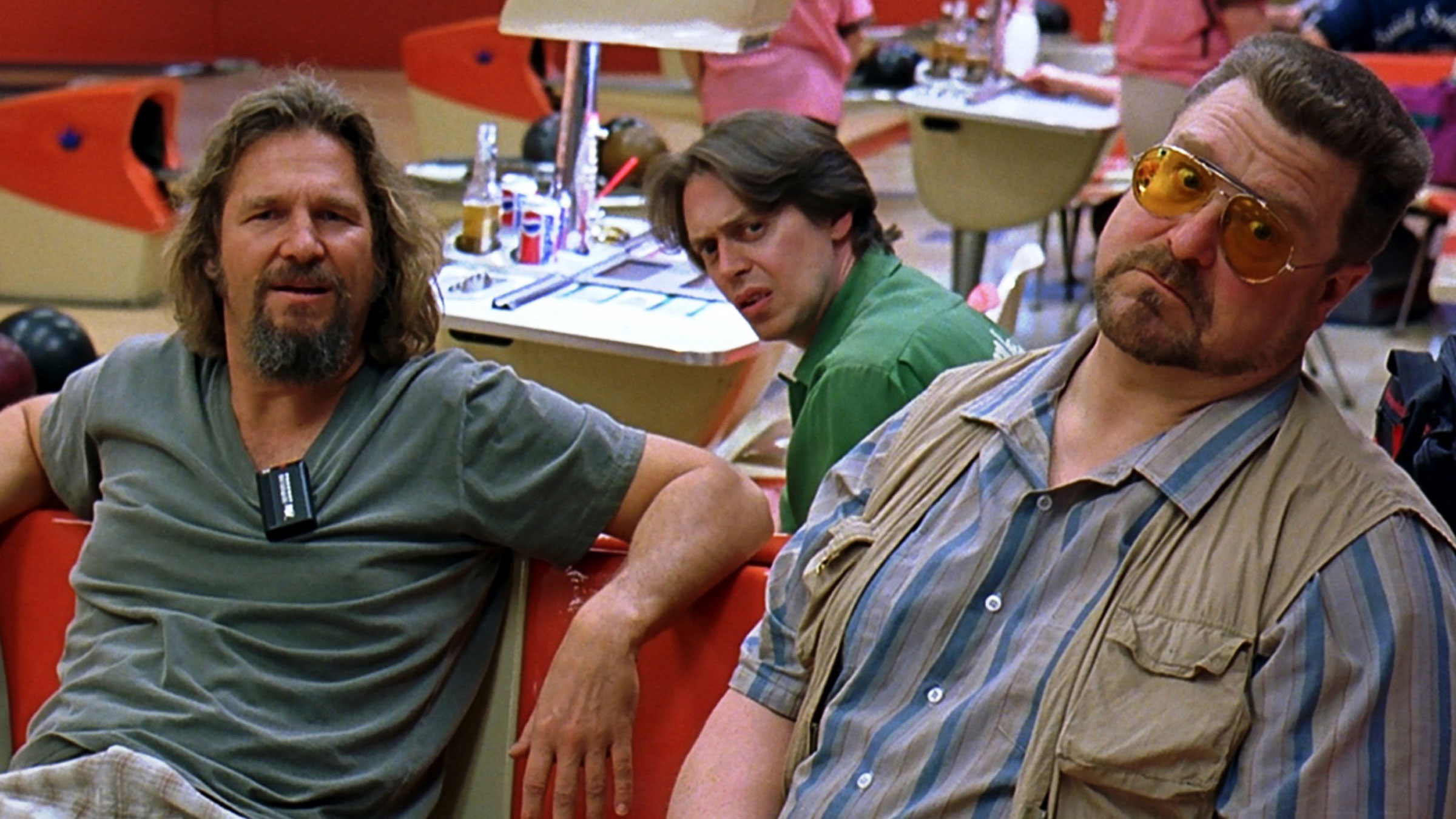 I cringe when I say that it’s been twenty years since I first saw The Big Lebowski and…that’s the last time I saw it. I know, I know. As a film critic I’m supposed to worship this movie, right? I’ve caught bits and pieces on cable, but I’d never sat down to watch the film in its entirety until I got the 4K disc.  However, something I’ll say is that if you’re a fan of the Coen Brothers’ films, then this one fits the bill. Some are and some aren’t. I find Raising Arizona to be one of the most hilarious movies I’ve ever seen and I know someone who walked out of the theater. I hated Fargo when it first came out and now adore it. See a trend? I have no idea what the Coen’s were thinking when they created the character of Jeffrey “The Dude” Lebowski – a perpetual stoner who likes his bowling, pot and White Russians. I have to say, however, that they’ve created something that we can’t unsee. And than’s a good thing.

Jeffrey Lebowski (Jeff Bridges), better known simply as The Dude, is not having good luck these days. His leisure lifestyle is designed to avoid stress and complications, but when two thugs bust into his place, rough him up, and piss on his rug, even The Dude succumbs to the pressure. He knows he isn’t the Jeffrey Lebowski the thugs were after and since he feels a replacement rug is in order, he sets off to confront the other Jeffrey Lebowski. That man happens to be a wealthy, hard nosed man who feels no sorrow for The Dude and the loss of his rug, no matter how it might have tied the room together. But when his young, flamboyant wife Bunny (Tara Reid) is kidnapped, he enlists The Dude to handle the situation. But The Dude just wants his rug and a return to the bowling lanes where he and his friends kick back. As he faces all sorts of unusual situations, will The Dude ever find peace again?

Odds are that there’s a Coen Brothers’ movie for you. For many it’s The Big Lebowski. Any movie that inspires an actual festival has got to be something special, right? The Coen’s, now Oscar winners (No Country for Old Men) have shown the kind of range that many filmmakers simply don’t have. Is it the wacky characters? The oddball plots? Both? Neither? It’s hard to put a finger on what it is that makes most of their films so special and one could go insane trying to figure it out. I value my sanity, so I’ll stop there. Suffice it to say that if you’re one of the few that hasn’t seen the film, it’s one to behold. A great cast led by Jeff Bridges and John Goodman with strong supporting performances by Steve Buscemi, Julianne Moore, Phillip Seymour Hoffman and Tara Reid (yes, Tara Reid).

This film has seen several different formats: DVD, HD-DVD, Blu-ray and now 4K (I won’t mention VHS, but I’m sure they’re out there). I first watched the Blu-ray and then switched to the Ultra HD/4K disc while the images were fresh in my mind. The difference is immediately noticeable with a smoother, more subtle image but a thin layer of grain still persists. This isn’t bad as it was filmed with “old-fashioned” film and not digitally. Colors are improved as well with the HDR offering a bit more depth than the rather flat-looking Blu-ray. I was impressed with how bright and bold the colors look, while as stated before, the subtle details really come to life. Details show fine texture as well like the milk in the Dude’s beard or the stains on his shirt. This new 4K issue is a welcome upgrade.

The upgrade in the audio department isn’t as remarkable, but the DTS X option does seem to provide an overall better experience than before. The film has rather creative audio presence at times, but this track handles it all with ease, even the musical inspired dream sequences. The movie’s fun musical soundtrack is alive and has good depth, while the precious dialogue is loud and clear. This might not be the track to showcase your home theater with, but it is good and marks a step up from previous editions.

As expected, Universal’s 4K disc doesn’t have any new features or any features at all. Those can be found on the included Blu-ray which is the same disc as the 10th Anniversary disc/release.

Movies like The Big Lebowski don’t come around very often, but when they do it’s best that they be experienced. Odds are that fans of the Coen Brothers’ films have seen this time and again. If you’re fortunate enough to have not seen this and have no idea what to expect, I envy you. While the film might not be for everyone, it’s got legions of fans (and a Lebowski festival to boot). Universal’s 4K disc ups the ante with a much-improved picture as well as a brilliant DTS X soundtrack.