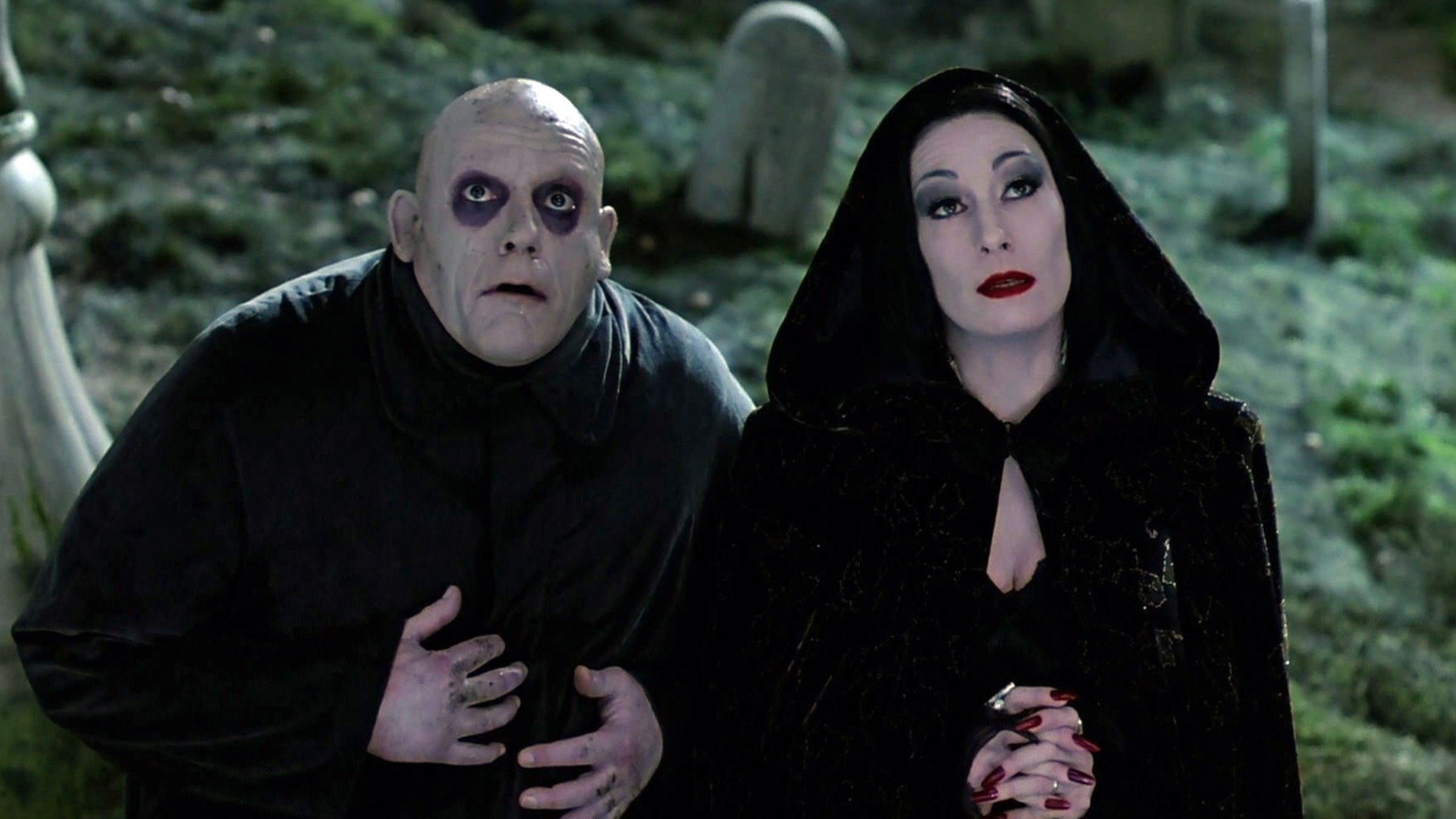 It’s hard not to think of the names “Gomez” and “Tish” without thinking of the hilarious TV show, The Addams Family. While being a rather dark television series, even thirty years ago, The Addams Family manages to be a very entertaining and very funny dark comedy for the 90’s. Looking something like Tim Burton would make, with its evil sense of humor and lack of bright colors, The Addams Family exploded on the screen in late 1991. It’s success, obviously, inspired a sequel which was not quite as original but just as entertaining. In this first installment we find our gang led by Gomez Addams (the late Raul Julia who was perfect in this role) and “Tish” Addams (Angelica Houston). They are in search for their dear relative, Uncle Fester (Christopher Lloyd), but have almost given up hope of conjuring him up from the dead. When a local woman gets wind of this, she dresses her son, who bears a striking resemblance to Fester, up like the departed relative and decides to get rich off their grief and appreciation.

The Addams Family is all about fun. While it is considered a “dark” comedy, it has its moments that are outright funny. One scene that comes to mind is the “Mamushka” dance between Gomez and Fester and this version gives us an additional two minutes of it! A traditional dance of the Addams family, it’s purely hilarious to see these characters up on screen dancing around like mad Russians! It’s also interesting to note that the character of Wednesday Addams is played with deadpan perfection by Christina Ricci, who has become quite the celebrity in her own right. The rest of the cast includes great character actor Dan Heyda and M.C. Hammer (who performed the theme song to the movie) to name but a few.

The plot isn’t all that hard to figure out, and director Barry Sonnenfeld has fun with the movie just like he did in Men In Black. It conveys a serious message of family, but at the same time can make you laugh until you’re blue in the face (like many of the Addams’ relatives). One might argue that The Addams Family has more than a few one liners, and they might be right. No matter which way you look at it, The Addams Family was successful enough to spawn a never-ending string of old 60’s TV shows that have now found their way to the silver screen (and our home theaters).

I’d recounted in my review of The Addams Family/Addams Family Values that “…these were ripe for a 4K restoration.” And, a few years later, this is exactly what we have (well, for the first film, no telling when they’ll get around to the sequel). Right off the bat I noticed a more film-like appearance, deeper blacks and increased detail. I do love 4K. And this is a film that really benefits from this new transfer. Flesh tones, and I say that a bit tongue-in-cheek, are for the most part normal, though with the pasty complexion of Uncle Fester (Christopher Lloyd) and Wednesday (Christina Ricci) it’s bit hard to get a spot on reference. Actually the only two in the movie that have any sort of real flesh tones are Gomez (Raul Julia) and Pugsley (Jimmy Workman). Simply put, this is what we’ve been waiting for.

Though this might have been ripe for a new Dolby Atmos mix, what we have is the same DTS HD Master Audio mix from the previously-released disc. I can remember M.C. Hammer’s song “The Addams Family” being played everywhere and this film came out during my first semester of college. Translation, every party I was at had this song blaring so it’s kind of permanently burned into my brain. Sad but true.  The soundtrack has a very expansive and immersive mix, the vocals are crisp and clean and if you can’t sing along a bit during the “Mamushka” scene then this isn’t the film for you.  Surrounds are prevalent but not overpowering and it adds to what I’d consider to be a nice upgrade (like the video) regarding sound quality.

Fans of The Addams Family can rejoice. This one has a lot of upgrades and the type of upgrades we’ve been waiting for. We get an unrated (albeit 2 minutes) version with “more Mamushka”, a brand new 4K picture and some new supplements as well. What more can we ask for?