It isn’t new for films to ignore previous versions to start anew (Batman Begins and Casino Royale) come to mind, and both of those are fine films. They were also much needed after abysmal earlier chapters. Terminator: Dark Fate instead takes the most recent Halloween approach and acts as a direct sequel to the wonderful Terminator 2: Judgement Day. This one ignores the third, fourth and fifth sequels and brings back Linda Hamilton as Sarah Connor. And while the film really didn’t click with audiences, costing Paramount a large sum of money, I can rightly say it’s the best sequel since the second film. Now, that might not mean much as the previous sequels were pretty lackluster, but the film does entertain if taken in the right mindset. I do think that this series should probably rest for a while after this film and it’s most certain the studio sees that these films just aren’t putting butts in the seats. So while this film didn’t deserve such a fate (see what I did there?), the numbers might’ve put the final nail in the coffin. Box Office figures aside, let’s dive in, shall we?

We open with a flashback sequence in 1998 where a rogue Terminator (Arnold Schwarzenegger) tracks down Sarah and her son, John (Edward Furlong in a wasted cameo) and kills him. 22 years later there’s a new model terminator known as “Rev-9” (Gabriel Luna). Rev is sent to Mexico to kill auto worker Dani Ramos (Natalie Reyes). Coming to Dani’s aide is Grace (Mackenzie Davis) who is an augmented human. This sets the plot in motion as Dani and Grace are on the run. The events are essentially the same as what we saw in T2, but obviously with a new set of fresh faces and some old ones. Hamilton is back, but so is Arnold as Carl/Model 101. Schwarzenegger doesn’t have as large a role here, but he is around for more of the second half and supplies much of the film’s comic relief. It’s great seeing him back as well as Hamilton as that gives us much more reason to care about characters that we have missed after three forgettable sequels.

While much of Dark Fate can feel like fan service and more than a little derivative, especially of the second film. I couldn’t help, but get lost with it and just enjoy the ride. The action scenes do pack a punch and the R rating is a welcome change of pace. The film rights a lot of the wrongs and avoids becoming too complicated. It even earns a few emotional moments toward the end. While the female protagonists do a much better job than I expected, it’s Hamilton and Schwarzenegger that bring the most to their roles, but everyone does solid work

The 4K 2.39:1 HEVC transfer delivers superb colors and details throughout with the HDR really taking control here and offering a more robust color palette than the Blu-ray. The hues had the expected pattern to them and the action scenes were clear and added some nice depth to the image. I saw the film in theaters and this recreated the experience with the expected results. Detail is amazing and we can see how much Ah-nuld and Linda Hamilton have aged since their heyday in Terminator 2. That said, fans will be pleased.

Of course the Dolby Atmos track kicks butt. This is a Terminator film after all. What else would you expect? I was hooked from early moments as we’re really brought into this world. The bass kicked in much of the film and I could feel my couch shake several times. Vocals are crisp and all is right with this track.

Let’s face it, there’ll never be a Terminator movie like the first two. That said, the acting as a direct sequel to the second film and ignoring previous chapters can be a bold decision and potentially confuse certain audience members, but it pays off. While maybe not a homerun, it still is the best sequel since the second film. I felt the acting was top notch all around and having Linda Hamilton return was a smart move. At the very least this one deserves a rental. 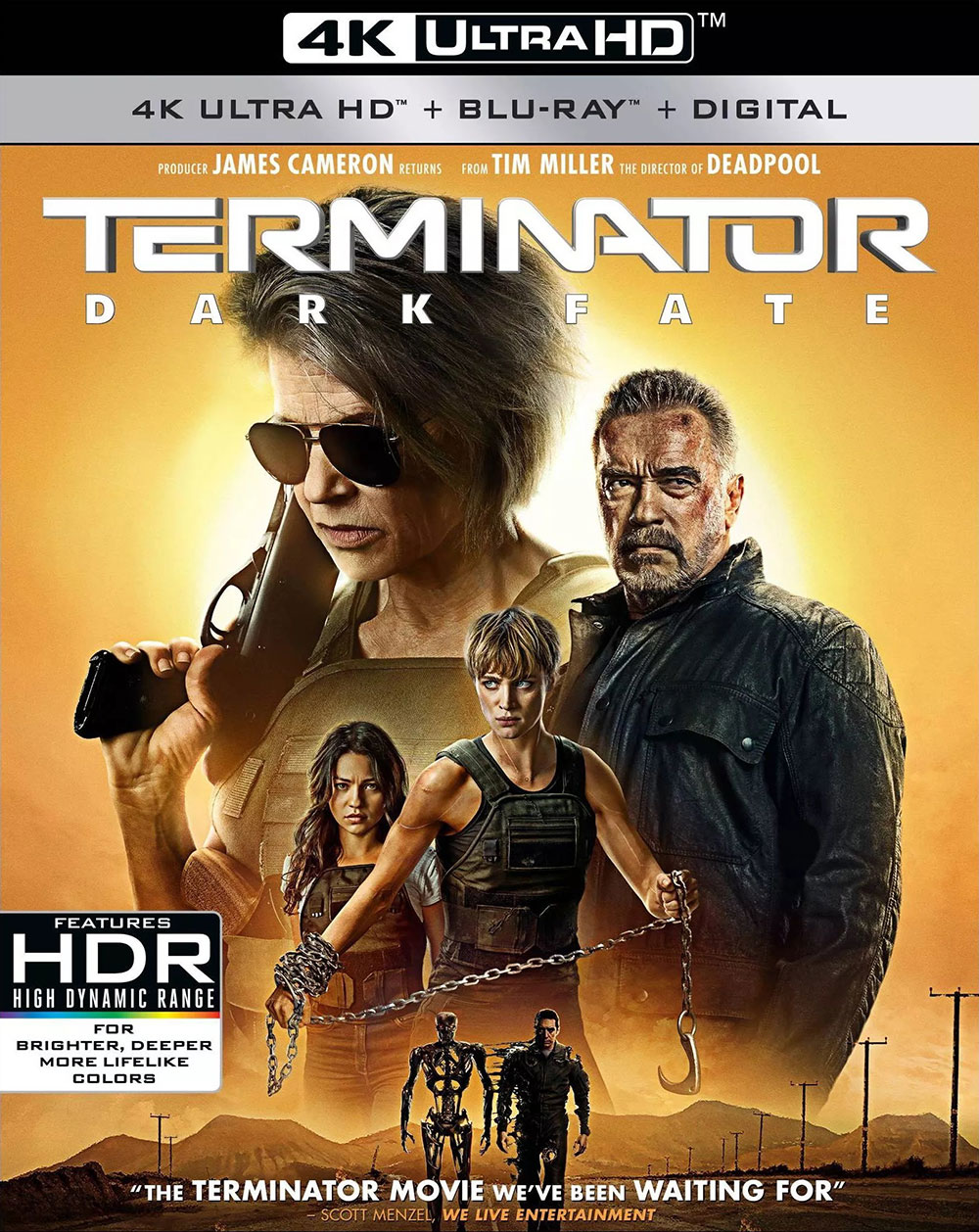