For those missing the buddy cop genre, well Stuber may just fill that void. The film has an appropriately old school vibe despite its central premise involving modern technology. That is with the Uber app which one of the lead characters uses for supplemental income. I sure wish this piece of technology was around when I was growing up as it would’ve saved me from having to be the designated driver for some of my friends. But I digress. Stuber is a fine little flick that was somewhat lost in the shuffle this past summer, but it can be a lot of fun if you approach it with the right attitude.

After his partner, Sara Morris (Karen Gillan) is killed early in the film, Detective Vic Manning (Dave Bautista) vows to seek vengeance. He is after a drug trafficker named Oka Teijo (Iko Uwais). We learn that Manning’s vision isn’t all there and his daughter convinces him to have laser eye surgery. This leaves Vic unable to drive, so he seeks out an Uber driver named Stu Prasad (Kumail Nanjiani). Stu works at a store, but picks up Uber shift to help make ends meet. He would rather not drive Vic around, but Vic hardly gives him a choice and Stu wants to maintain his 5-star rating. Also, Vic needs Stu to help him navigate as his eyes are still recovering. The film then follows these characters as Vic tries to break the case and track down Teijo. We also get a few subplots involving Vic’s daughter and Stu and his boss and a love interest as well. The film is brisk so these elements don’t feel too intrusive to the main plot.

Clocking in around 93 minutes, Stuber has the courtesy to not overstay its welcome. The film’s plot is solid enough to not feel padded, but also doesn’t ask a whole lot of the audience. The banter between the two leads is great and several of the asides and the various stops that Stu and Vic make are very amusing. I will say that the film does get a bit more violent that it should have, but I don’t feel too bothered by it. I feel it might’ve benefited from a less-is-more approach, but it also doesn’t feel watered down, which is nice. It has a very 90’s vibe to it which some might find refreshing as we don’t get a lot of these types of films anymore. Give it a try and you just might enjoy it like I did.

Concurrent with most every other “new to the format” film out there, Stuber looks the part – especially on 4K. The film has a very warm tone to it, not to the point of looking “overcooked”, but you’ll find reds, yellows and oranges prevailing. When looking at the Blu-ray counterpart (also available in this set), I found the 4K to be just a tad bit sharper and the black levels having a bit more contrast. Flesh tones are on the level as well. We all know the drill here, whatever version you go with it’s sure to please.

Springing for the 4K version means not only an uptick in picture quality, but the addition of a Dolby Atmos track (the Blu-ray has a DTS HD Master Audio). On paper that sounds like a good reason, but in all honesty they sound just about the same. Obviously, I’d give the edge to the Atmos with a bit more ambiance and atmosphere, but that’s not to say that the DTS HD Master Audio track can’t shake the room. It can (and does). Again, either way you go it’ll end up more than serving its purpose.

Stuber didn’t exactly set the box office on fire nor did it click with critics, but I rather enjoyed the film. I feel the two leads have great chemistry and it’s just a fun ride (no pun intended). It’s a film with so many little moments that work that a review can hardly touch on just all of what it has to offer. I feel it’s something I can revisit from time to time. Check it out. 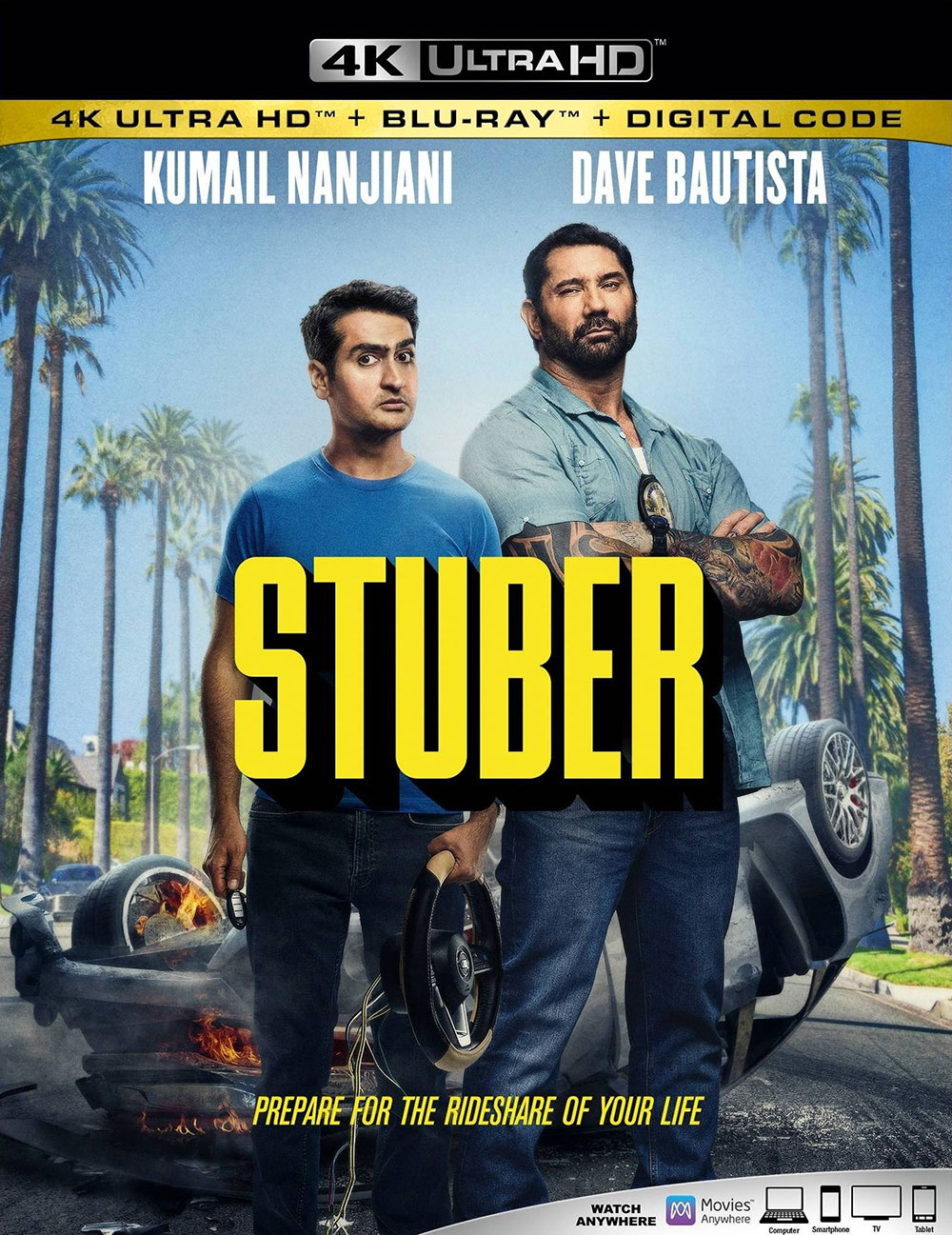