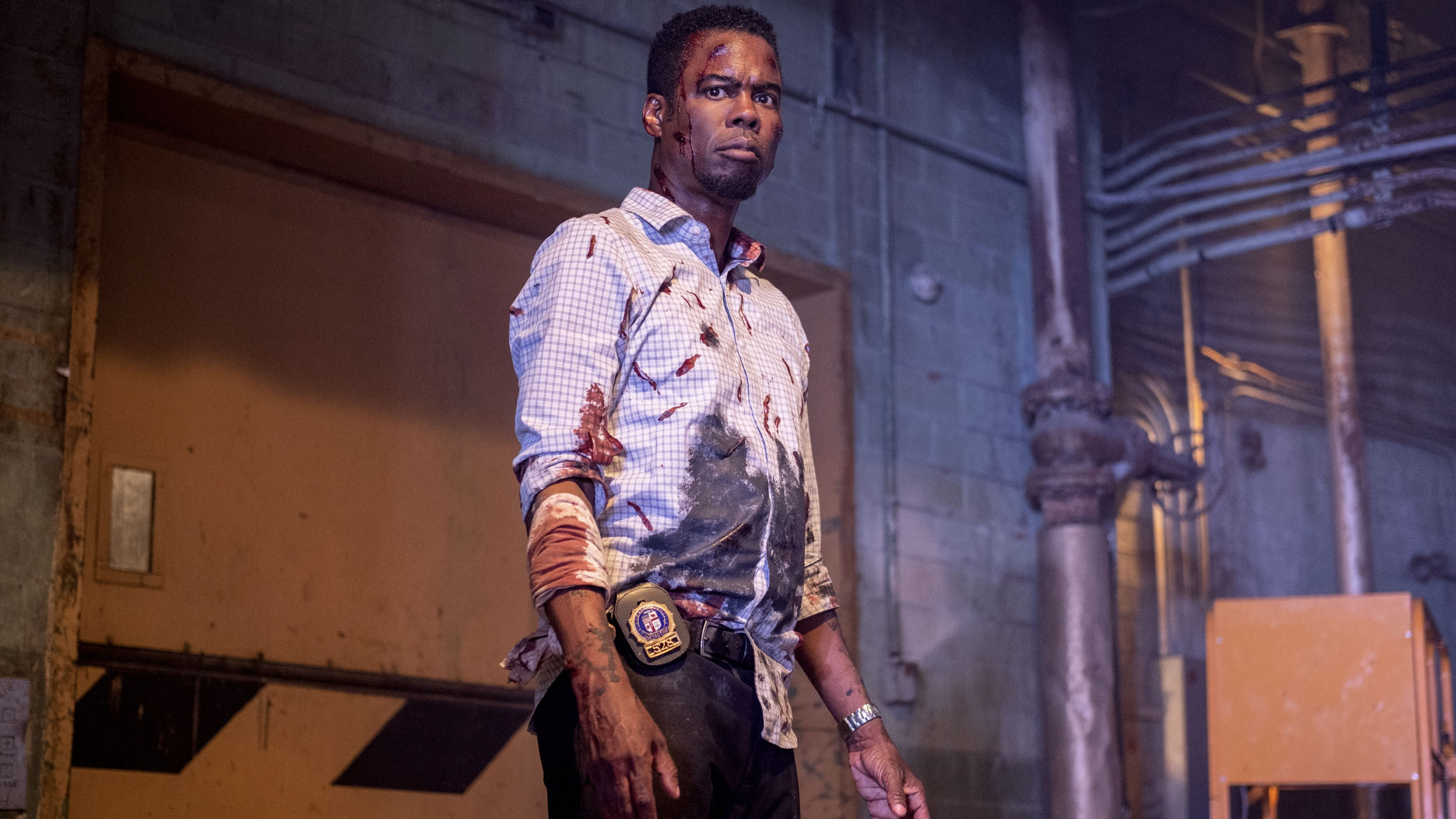 You know a franchise has made it when they start doing spin-offs after the sequels have been exhausted. As anyone reading this likely knows, Spiral is the latest entry in the Saw franchise that made its debut in the mid-2000’s. If this is news, then stop right now and go watch at least one Saw movie and then come back and finish. Otherwise this won’t make much sense and my reviews are hard enough to understand to begin with. Ok, moving on…I’ve lost count of how many Saw films there are, but all I remember is that the last spin-off was Jigsaw and now we’ve got Spiral. I had no idea it was even a part of the same universe until I saw the writing on the box. That said, I was always a sucker for these films and I figured with Chris Rock and Samuel L. Jackson, it was worth a shot. Let’s get crackin’ (and I mean that, of course, in the most literal sense).

Detective Zeke Banks (Chris Rock) is the son of former Chief of Police Marcus Banks (Samuel L. Jackson). Zeke isn’t that popular and it didn’t help matters that years earlier, he turned in a fellow officer. He’s now ostracized by his fellow workers. Zeke is assigned a new partner, William Schenk (Max Minghella) as they start to investigate a copycat of the “Jigsaw” murders. The victims this time around are fellow cops. To add fuel to the fire Marcus disappears and it appears the the copycat is looking to get the attention of Zeke. Zeke, of course, must weigh the options and try to solve the case without any harm coming to his father. The question is, can he piece together the clues in time?

This seemed to be a departure from some of the earlier entries in the franchise in that more emphasis was put on the actual torture scenes. They’re present here, naturally, but I found that there wasn’t quite enough emphasis put on them. That’s fine. I don’t know if I want to see a man’s fingers get slowly pulled from the rest of his hand lest he fall back and be electrocuted instead. And even thinking of some of the things that appear in this and other films, I’d really hate to meet the person(s) responsible for coming up with this stuff. Spiral seemed to be a bit more character-driven than the other Saw films and while some might like it, it just didn’t seem to have the right vibe for me. Entertaining? For sure. But it’s no Saw. Then again, maybe that was the point.

The Saw movies have always had a rather unique look to them. Each has their own flavor, for sure, but when you consider the subject matter, none of us will ever expect blue skies and candy-colored scenes (unless it’s part of a cruel and unusual torture). And that’s the case with Spiral whose 2.39:1 HEVC 4K image leaves nothing to the imagination. I’d have to imagine we want the utmost clarity when a man is dangling in front of a moving train suspended by his tongue. That said, the film also has somewhat of a graded look to it, giving it a lot of more natural and earthy tones. Detail, as expected, is top notch and the image wasn’t compromised by contrast or blocking in any way. It’s a home run.

Being a new film, the 4K (and Blu-ray) both support a rather robust Dolby Atmos track that pulls no punches. I found that particularly during the ending act, there’s an immersive and palpable aural essence that envelops the viewer. And that’s the point, right? Vocals are, as expected, crisp and clean and we get to hear each in every “F” bomb dropped in full Atmos glory. You’re welcome. LFE have a few moments to shine, in particular when Rocks’ character fires up his Camaro. It’s as we’d expect – an atmospheric mix that takes everything we love about these films and gives it to us in spades.

I’ll be the first to admit that the Saw movies have always been somewhat of a guilty pleasure for me (and countless others). Now that the franchise seems to be in spin-off mode, I’ll also say that they’re not quite the same. That’s not to say they’re bad by any means. To see Chris Rock and Samuel L. Jackson in a bona fide horror movie is something in and of itself. Fans of the franchise will get a kick out of it. Lionsgate’s disc looks and sounds good and has enough supplements to warrant a purchase and keep your Saw collection expanding.