Get it? I have to admit that films like this aren’t really in my wheelhouse. I don’t dislike them, but I consider myself more of a live-action film buff. But part of this job is that I do try (and need, with the studios’ encouragement sometimes) to review what’s sent my way. And so it goes that we’ve got Will Smith and Tom Holland as the leads for this animated spy movie. If this isn’t your cup of tea, don’t worry as we’ve got two dozen James Bond movies and, as of this writing, half a dozen Mission: Impossible films. So go nuts if you don’t want to see Will Smith turn into a pigeon. Oops, did I just give something away? Let’s begin.

Lance Sterling (voiced by Will Smith) is a world-renowned super-spy. He’s been set up to take the blame for the theft of a powerful drone, however, and he looks for a way to elude the agents sent to bring him in. Lance turns to pal and super scientist Walter (voiced by Tom Holland). Things go awry and Lance ends up accidentally drinking a potion that turns him into, well, a pigeon. Yes, you read that correctly. So now Lance, with new body, must try to clear his name and try to catch the bad guy, Killian (voiced by Ben Mendelsohn who must play a bad guy in every movie, even animated ones). What’s a spy to do?

The appeal of these animated films is their equal appeal to both adults and kids. I suppose it’s assumed that the parents will watch the films with their children, so it would make sense to throw in a few references for them as well. And Spies in Disguise is pretty clever. Even the name (see the by-line). Again – get it? There are some action sequences that rival that of a 007 film and I do have to credit the genre; it must be pretty hard to storyboard an animated film and then bring it to life. Or not, I don’t know. It’s a harmless film from the same studio that brought us films like The Peanuts Movie and Ice Age. Give it a chance, it’s worth the price of admission.

Ok, if it’s not evident by now that any computer-animated film is going to look amazing on your 4K TV then I don’t know what to tell you. Be it Pixar, Dreamworks or any of the other studios out there; it’ll look amazing. And so does this. I don’t necessarily see the need for a 4K version of something that looks nearly as good on Blu-ray (also included in this set), but to each their own. What can I say? Colors pop. Detail is razor sharp. Contrast is strong and just about every visible part of the color spectrum is represented here. The 2.39:1 HEVC 4K image simply looks so good you feel you can reach out and touch it. But don’t, though, you’ll just smudge your TV and then you’ll have to clean it. You’ve been warned.

Admittedly, there is a benefit to purchasing the 4K version when it comes to audio. This version features a Dolby Atmos soundtrack whereas the Blu-ray has a DTS HD Master Audio track. I don’t know why they do it like that, but it is what it is. Suffice it to say that no matter which one you choose, the sound is robust. All of the actors’ voices are clearly and faithfully represented, though I did catch a bit more “action” on the Atmos mix. It’s a busy and dizzying soundstage that’s sure to please and don’t forget to turn it up – there are a few pretty jazzy songs mixed in.

Puns abound. And as much as I wanted to dislike the film, it does have a few moments. It wasn’t quite the cash cow that was expected, though only raking in half of its budget domestically and about that much worldwide. So will there be a Spies in Disguise II? I doubt it. Still, it’s fun and the movie should delight. The extras are paltry, but if you’re a die hard fan of the film you could do a lot worse. 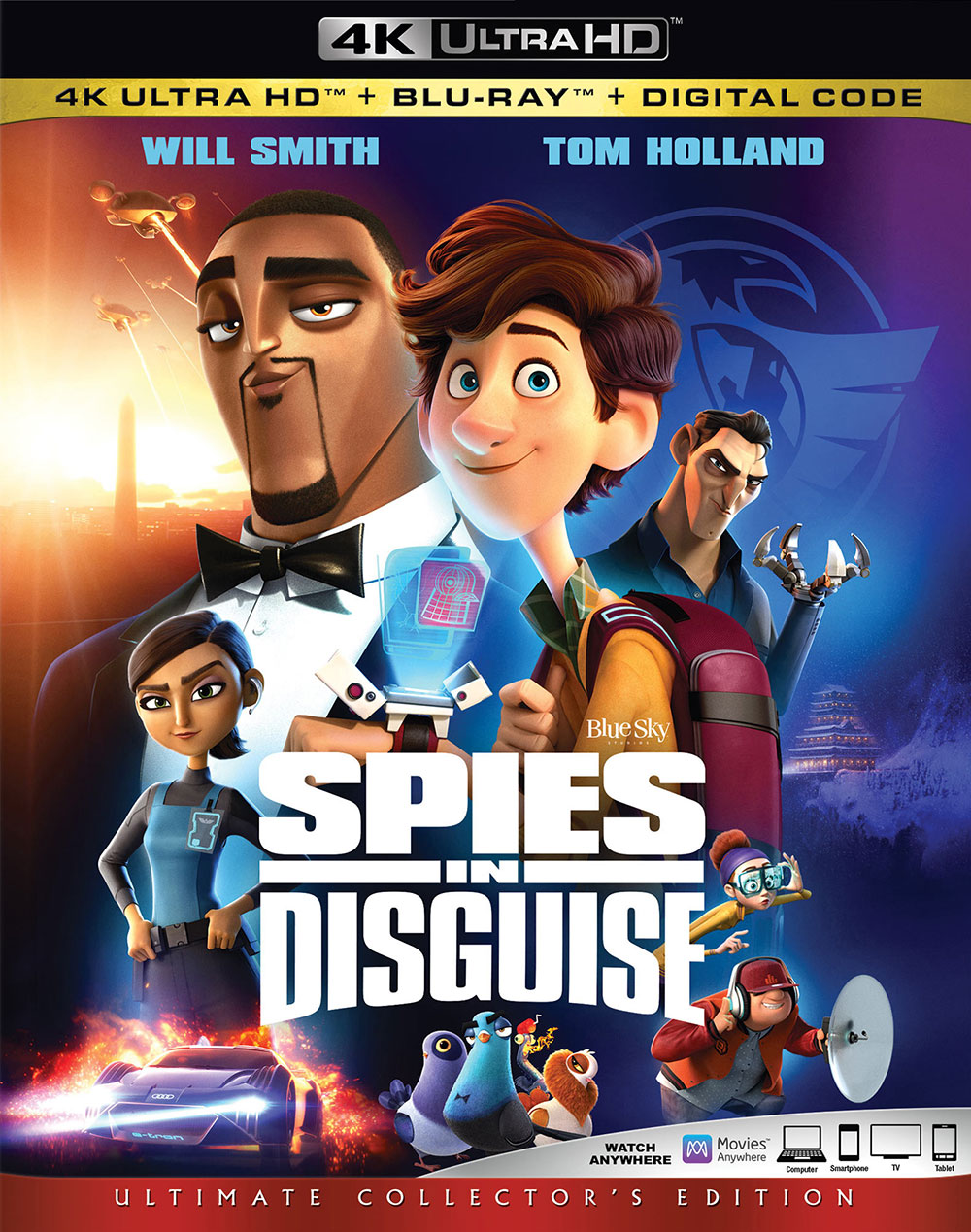