There was a lot of pressure on this film as it came out just a few months after a little flick called Avengers: Endgame. That one was the one everyone was looking forward to and (minor spoiler), it appeared as if Spider-Man, among others, might be dead. But we all knew that a new Spider-Man film was coming out, so it wasn’t a matter of “if”, but “how are they going to explain it?” Well, they did. So, here we are…again. Yes, it’s another Spider-Man movie, the eighth (if you count the amazing Into the Spider-Verse) and the third person to play the web-slinger since Sam Raimi’s 2002 movie. And it helps matters that spidey is no longer an outlier, he’s a part of the MCU which makes everyone very, very happy. Let’s go to Europe.

Peter Parker (Tom Holland) is struggling with the death of his friend, fellow Avenger and mentor Tony Stark. He’s also trying to accept that Nick Fury (Samuel L. Jackson) expects him to fulfill his role with the aforementioned team. But all that Peter wants is to enjoy a school trip to Europe where he attempts to pursue M.J. (Zendaya). Things get even more complex when a water monster shows up to wreak havoc. But the day is saved by Mysterio (aka Quentin Beck / Jake Gyllenhaal). He’s a new superhero who claims to save the world (don’t they all). But there’s something about Quentin that doesn’t sit right with Peter and that’s when things get interesting…

I enjoyed Spider-Man: Far From Home, but a few things stood out to me that didn’t sit right. First, I love Tom Holland as Peter Parker. I think of the three actors who’ve played him, he’s the best – by far. Gyllenhaal is, as always, good in his role. And I applaud the MCU for bringing out a rather obscure character for this film. What bugged me was that some of the minor players in this film seemed to have a little too much to say. Even Nick Fury was overused. He’s best in small doses. But Happy’s (Jon Faverau) character, Flash (Tony Revolori) and even a character played by “Ralphie” himself, Peter Billingsley (he played the same character nearly a decade ago in 2008’s Iron Man). Again, they didn’t ruin the movie, but what makes these films work are the headliners. Fans will enjoy this second installment and it really is a treat to see the title character in film after film.

Although the Blu-ray looks great, there is a noticeable uptick in picture quality when popping in that 4K disc. Colors have a bit more range, whites are a little brighter and darks a bit darker. You know, pretty much everything that makes a 4K disc what it is. Both versions feature the same amazing-looking transfer that showcase the detail of the film. The little nuances in spidey’s costume and mask and even Mysterio’s “aura” (for lack of a better term). Those who are looking for the best-looking version of the film will want the 4K disc, but in all honesty the Blu-ray would and should suffice.

I get it. Finally…I get it. A large majority of Disney’s Marvel 4K offerings have been singled out for, well, not sounding that great. They’re not bad, per se, but some of the dialogue is clipped and it’s like you have to turn the volume up at certain times to get the full effect. After re-calibrating my audio setup, I did notice that the difference between the Blu-ray’s DTS HD Master Audio and the Dolby Atmos found on the 4K disc. Again, not a night and day difference, but the DTS version seemed to pack more punch. Directional effects and LFE are heavily involved in both, but I’m scratching my head as to why (and how) this sort of thing can happen. It seems odd that to get the best audio and video quality you’d have to watch two different discs, but that seems to be the case here.

Spider-Man: Far From Home was the first post-Avengers film and, in my opinion, a better film than its predecessor. The 4K offering is a bit of a mixed bag offering superior video to the Blu-ray, but inferior audio. The supplements are identical. A tough call, but I’d go with the Blu-ray. 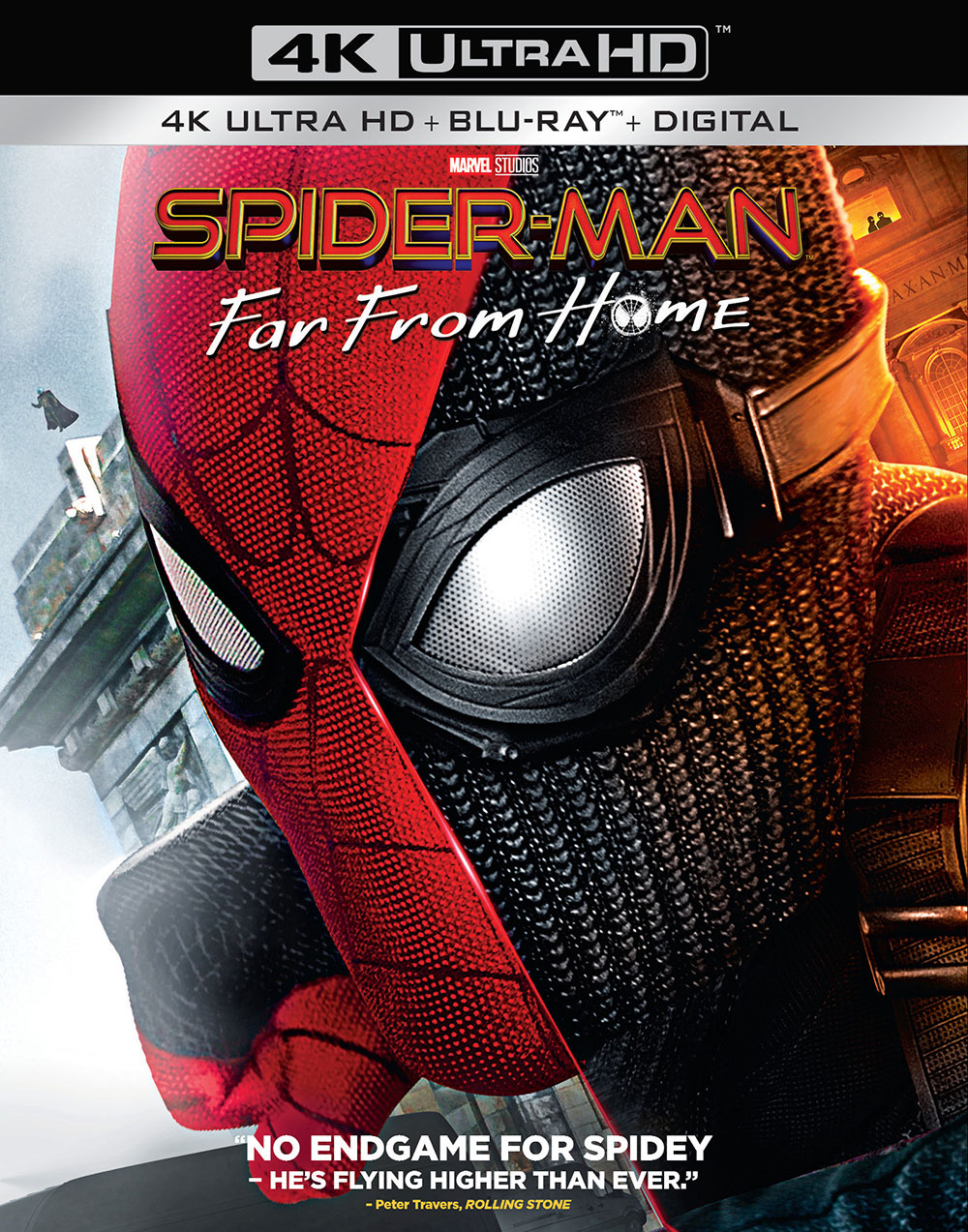