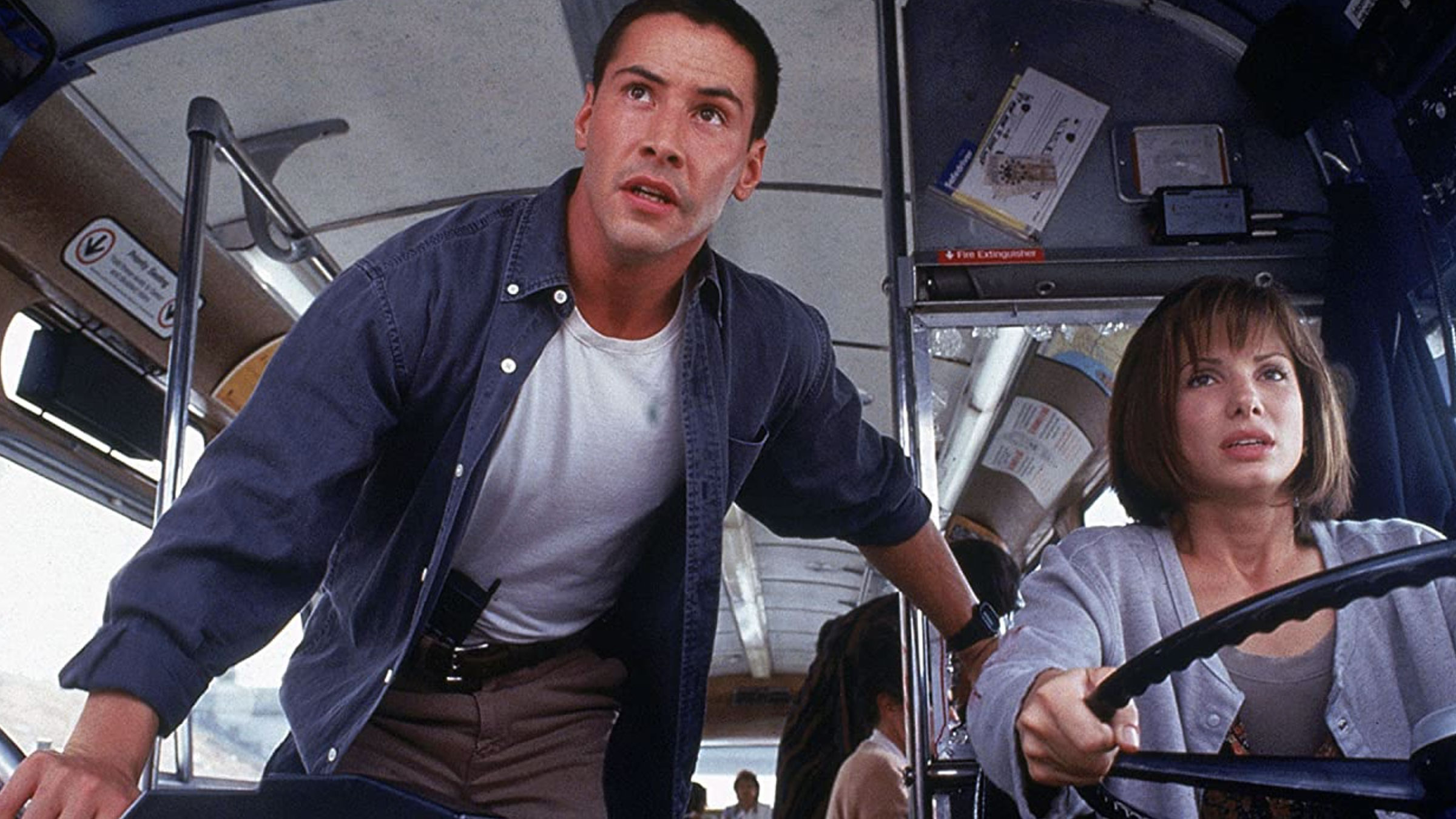 A bomb has been placed on an elevator in a busy skyscraper and of course, the device is armed as soon as the lift fills with people. The bomb blows the wires to bits and except for the emergency brakes, nothing stands between the passengers and certain doom except the will of a madman. Unless he is given three million dollars, another explosion will happen and this time, the fates of the innocent people will be sealed. So the L.A.P.D. sends in bomb squad members Jack Traven (Keanu Reeves) and Harry Temple (Jeff Daniels), a couple of skilled agents who happen to be friends outside of the line of work. The tandem manage to secure the passengers and save the day, but the bomber, Howard Payne (Dennis Hopper) manages to escape, as well as fake his own death in the process. Payne has plans however, plans to settle the score with Traven and collect his millions, even if it means killing countless innocent people to do so. His newest scheme involves a bus loaded with passengers, as well as a powerful explosive device. If the bus slow below 50 miles per hour, it explodes and if a rescue attempt is made, Payne flips the switch. Can Traven somehow foil Payne’s plans once again, or does Payne have the final laugh this time?

An action movie that takes place on a bus? I know it sounds hard to believe, but as we all know, Speed was a smash success and kickstarted some trends, including the careers of stars Keanu Reeves and Sandra Bullock. As with most action movies, you’ll need to overlook some gaps in logic, but it is worth it, as Speed is one intense motion picture. The tension comes from all directions and just when it looks as if a solution has been found, you’ll be taken in a new direction, one which usually enhances the suspense. Reeves and Bullock turn in solid efforts, but Dennis Hopper provides the best performance here, with several memorable lines and a general sense of menace that keeps the tension ever present. The movie also keeps the audience on edge because this is not some outlandish premise, this is just some normal people in a terrible situation, so we can relate to them more and by turn, the tension is more effective. I think Speed is a terrific and quite fun picture, without question and it deserves a place in any action lover’s collection. As far as an upgrade to this new Blu-ray version, the video and audio are improved, but the extras are sparse, so it depends on what you hold more important.

Although The Matrix has been his biggest hit to date, Keanu Reeves moved into his current star status thanks to Speed, no doubt about it. His move into the big leagues wasn’t fueled by his skills as a traditional thespian however, instead by his screen presence. I’ve always liked his work in comedies and before I saw Speed, I did have some doubts about a move into the action realm, but Reeves handled the task with ease. His line delivery and such still fell short, but he did well enough and of course, had some good chemistry with his female co star. This kind of movie needs strong presence, since it takes place mostly in a confined area, so Reeves was able to do just that and turned his role into a career in action movies.

The advent of 4K was a good thing in that it can make any film look better. Speed is the latest catalog title to get a “makeover” and the result is nothing short of stunning. The 2.35:1 4K HEVC transfer cleans up a lot of the issues that plagued the earlier Blu-ray releases. I noticed that the overall image clarity seemed to flow a bit better. Detail has been enhanced (notice the spots of dirt on Reeves’ white shirt throughout), black levels a bit more strong and the HDR does a great job of bringing out the best in the color palette. This is yet another one of those films that I’ve seen on pretty much every format out there and this is, by far, the best the film has ever looked. A stunning job.

On the more disappointing side, we do get a great-sounding DTS HD Master Audio mix that brings out the best in the movie. The film did win two Academy Awards for Best Sound and Best Sound Editing, so I would have thought a Dolby Atmos track might have been in the mix (pun fully intended), but I suppose it wasn’t meant to be. The tense chase sequences sound terrific, with deep impact moments and great directional presence, putting you right in the middle of it all. When the action moves more toward guns and explosions, the power kicks up a notch and the surrounds open up wide. The soundtrack is loud and effective, though too loud at times, so some volume management might be needed. The more subdued scenes also sound fine, while dialogue is clean and offers no problems whatsoever.

There have been a few incarnations of this film on Blu-ray and I have to believe that all of the supplements were compiled for this Ultimate Collector’s Edition.

More than a quarter of a century after its initial release, Speed manages to still entertain. Granted, it uses the Die Hard formula (terrorist with a bomb), but it just works here. The chemistry between Reeves and Bullock is palpable and it’s a shame that as good as this film was, Speed 2 (which I’ve still yet to see) was such a dud. The two did reunite in 2006’s The Lake House (another film which I enjoyed), but it just wasn’t the same. Nevertheless, Fox’s 4K disc looks and sounds great and belongs on every movie-lover’s shelf.