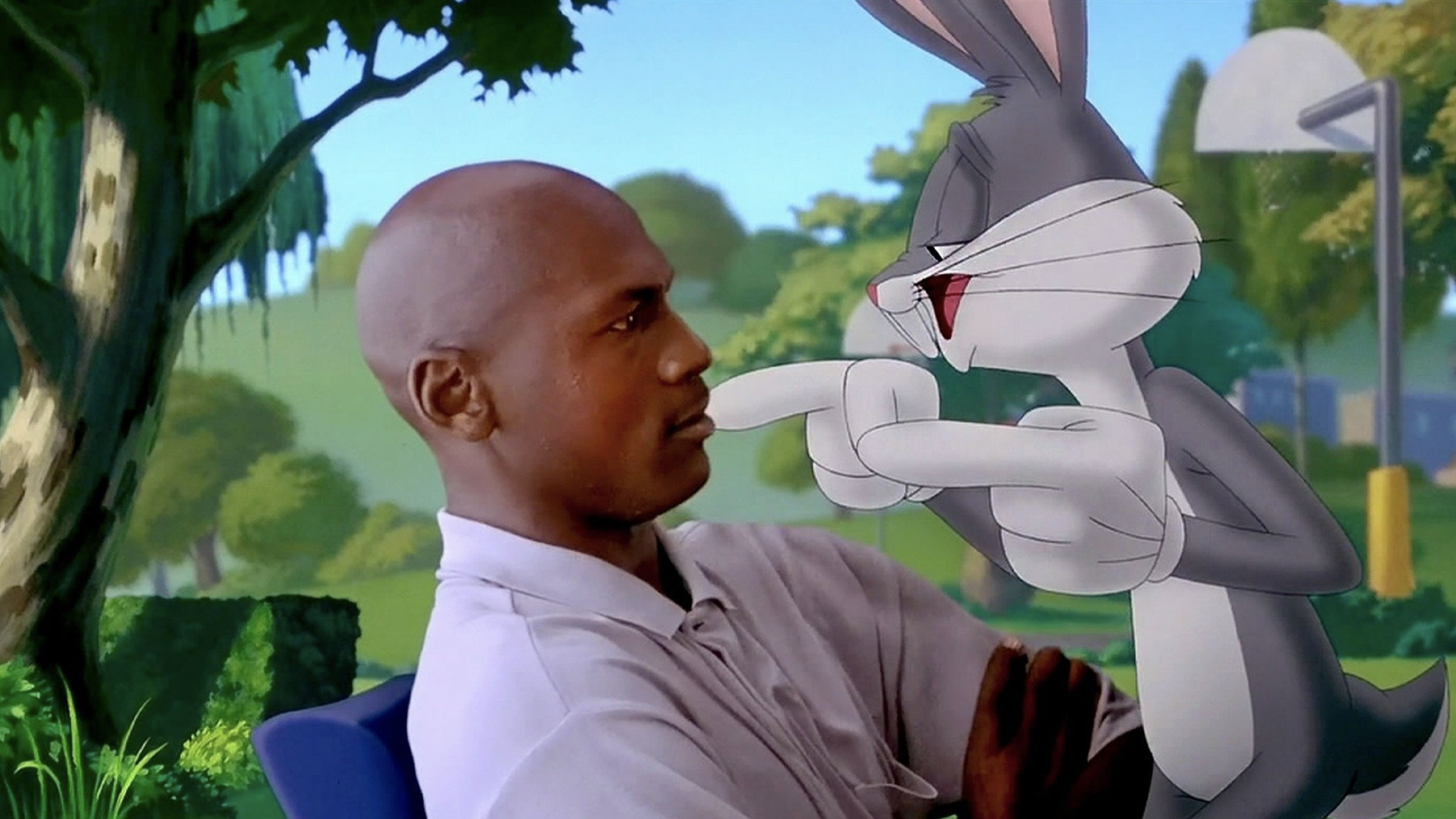 It’s been a quarter of a century (as of this writing) since we were introduced to Space Jam. And it’s a movie, until now, that I’d never seen. It’s funny, when I tell folks that I’m a film critic (or at least someone who runs their own movie review site) it seems expected that I’ve seen every film out there. And that’s just not true. West Side Story, Lawrence of Arabia and The Sound of Music are just a few of the classics that – for whatever reason – I’ve never sat down and watched all the way through. And I’m willing to bet that there are no other reviews of Space Jam that mention those three films. The film capitalized on the success and popularity of the greatest basketball player of all-time: Michael Jordan. Add to that the allure of the Looney Tunes and Warner figured they’d have an instant hit on their hands. They did…sort of. Nevertheless, if you’re ready to see some basketball with players who retired 15 years ago then get ready!

Swackhammer (voiced by Danny DeVito) runs the amusement park at Moron Mountain, and business hasn’t been that good as of late. As such, he has decided to add some new attraction in an effort to perk up business, and the attraction he wants are Bugs Bunny, Daffy Duck, and the rest of the Looney Tunes gang. He sends his short and stumpy associates the Nerdlucks to acquire them, whether they agree or not. When they arrive Bugs thinks he can overtake them because of their small stature, but soon discovers they are packing some serious heat. Bugs gathers his thoughts and challenges the Nerdlucks to a contest to determine the freedom of the Looney Tunes. Due to the small size of the Nerdlucks, Bugs decides that basketball would an easy win for him and his friends. But the Nerdlucks have the last laugh when they steal the skills away from some NBA superstars and become masters of the court, renamed the Monstars. In a state of total desperation, an idea is hatched. Bugs and Daffy go into the real world to entice Michael Jordan to join their team, which could be just enough to overcome the odds. After some convincing Jordan agrees, but in order for him to play, he has to strike a deal with Swackhammer. If Jordan and his friends win then they all go free, but if they lose, then Jordan becomes a slave to Swackhammer and will be forced to work Moron Mountain forever.

I can say with the utmost confidence that I’m glad I watched Space Jam. It was mildly entertaining, though I felt I was about four decades removed from the film’s target audience. If anything it reminded me how inundated with Michael Jordan we were back in the 90’s. There’s a quip by Wayne Knight who mentions just about every sponsor that Jordan was associated with. I’m not sure if they were making fun of him or they were paid to mention them. At any rate fans of Jordan, basketball and/or the Looney Tunes will have no doubt seen this. I’m certain that this was in every parent’s VHS collection back in the day to keep the kids occupied. It’s clever, but it also seems forced for lack of a better word. But hey, I watched it and that’s saying something. Next up: Lawrence of Arabia. Maybe.

Animation has come a long way since this film’s release and what took me off guard was getting used to the different shading on some of the familiar Looney Tunes characters. It’s hard to describe. That said, this new 4K image is the best the film has ever looked thanks to increased detail and a wider color spectrum. The colors are bright and vivid, everything we would expect from a new digital transfer. The animation sequences appear very lifelike and almost jump off the screen. This was one of the early releases on the then fledgling DVD format and it always contained a full-frame transfer. Sadly, ok not really, that’s not present here. This is a great effort that’s sure to please.

The movie is all about sound. From the opening credits to the closing, the new Dolby Atmos mix certainly does its job. The dialogue is very clean and sounds very natural. The ending basketball game sounds particularly engaging, bringing the LFE into the mix. Surrounds are prevalent throughout the entire movie, and the movie’s soundtrack takes full advantage of the wide range of speakers. Contrast this with the DTS HD Master Audio mix found on the Blu-ray and there’s a noticeable difference. Then again the film’s target audience probably won’t notice (or care).

As I mentioned above, I’d not seen this movie in its entirety until popping this 4K disc in the player. It’s about what I expected and I doubt I’ll ever feel the need to watch it again. Still, I’m sure a generation (or two) have been entertained by this film and it will, no doubt, continue to do its job. Warner’s 4K offering looks and sounds good and there’s not a lot more we could ask for.