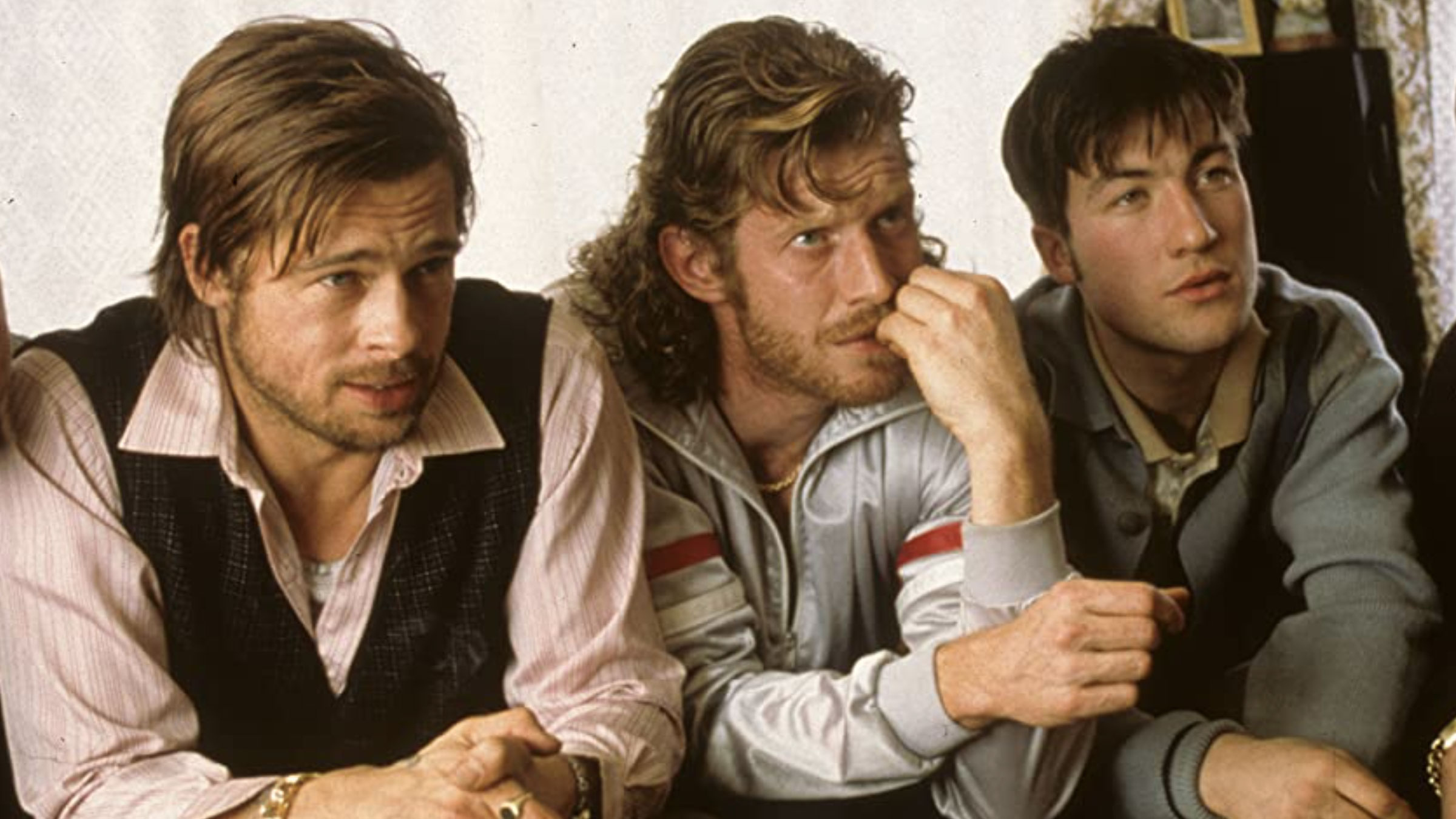 Franky Four Fingers (Benicio Del Toro) has stolen a massive diamond, which has many people interested in his person, even some that don’t know why. He arrives in London and after phoning Cousin Avi (Dennis Farina), he meets with Doug the Head (Mike Reid) and tries to appraise the stone, but before he can do anything he has a bet to place. Frankie has a problem with gambling of course, but this wager is on behalf of Boris the Blade (Rade Sherbedgia), who is simply using the chance to steal the diamond, but Franky has no idea. You see, Boris has hired three small time thugs to knock over the bookie’s place and rake in Franky’s briefcase, but as usual, things don’t go as expected for the three criminals. At the same time, Turkish (Jason Statham) and his partner Tommy (Stephen Graham) are trying to fix a most serious situation, which leaves with a Pikey boxer Mickey (Brad Pitt) as their fighter and if the match is flawed, Brick Top (Alan Ford) will have them skinned and fed to the pigs. As time passes, these stories and more begin to intertwine at times and of course, the end result is downright outrageous.

If you’re a fan of crime movies with dark humor involved, then Snatch is a flick you can’t afford to miss, as it flat out rocks. I wouldn’t call it a great film in the usual sense, but it is a blast to watch and has some superb performances. I am partial to Alan Ford’s turn as Brick Top, but other good performances come from Brad Pitt, Jason Statham, Benicio Del Toro, Dennis Farina, Mike Reid, and Rade Sherbedgia, among countless others. I love the character work in this flick and of course, writer/director Guy Ritchie deserves much praise, to be sure. It might have a lot in common with his previous project, but Snatch seems quite original and in the end, I think it takes another step beyond and that’s always welcome. This is a well written, well performed, and well photographed picture, a terrific creation in all respects. I think some scenes work better than others of course, but I found Snatch to be a riotous good time and if possible, you should watch it with friends, that’s when it really kicks in. I give this film a great recommendation and this two disc edition is great also, there’s no reason not to give this release a spin, if you’re interested.

In his second run out of the feature film gate, Guy Ritchie seems to hit another home run, as Snatch is a terrific flick in all respects. Yes, this movie is not a distant reminder of his previous effort, but Snatch offers enough unique content to accuse Ritchie of going to well once too often, at least I think so. I suppose you could discuss theme, character, and even some scenes that look right out of his prior picture, but I think this is far from an uncreative production, to be sure. I would like to see what he can do in other genres and perhaps even with a different tone involved, but even as it stands, Ritchie is a solid director and has some real potential within himself. Of course, his other film to date is Lock, Stock & Two Smoking Barrels, another cool movie with similar tones.

There are two elements to this set that make it a worthwhile purchase. First, the new 1.85:1 HEVC 4K image gives us a pretty noticeable upgrade from the Blu-ray (also included). The film uses a variety of stocks and is a bit hard to classify a particular score in that it’s so varied, visually speaking. Still, the majority of the film is very sharp, with improved contrast and the detail on the whole looks a bit better than the previous disc. The color palette used isn’t too bright, most of the colors and the atmosphere is sullen and somewhat downtrodden. It’ll never be the epitome of 4K, but it’s the best the film has ever looked.

Sony has added a new Dolby Atmos track to the film. While the DTS HD Master Audio technically had nothing “wrong” with it, this gives the track a bit more depth. Snatch has a varied soundtrack and some of the best, albeit infrequent, instances are when Brad Pitt’s character boxes. The thud of the hit, coupled with the sound the body makes when hitting the floor are some great examples of surround sound. Dialogue is very clear, though if you can make out a word Pitt’s character is saying, you’re one up on me. Like the video, the audio is improved, but there wasn’t a whole lot that needed improving.

No new supplements have been added from the previously-released Blu-ray, but what was included there (and mostly on the second disc) wasn’t too shabby.

If films like these are your thing (or you’re a Guy Ritchie fan), then you’ve seen this one several times. While there are no new supplements to speak of, the improvement in the audio and video makes this the definitive choice and will certainly secure a spot in your 4K collection. Dare I say it – Sony does it again.