As much a remake as it is an original movie, Scarface is the same in name, though the plot isn’t. Extremely violent for its time and was criticized (as was the remake) for it. Patterned after the life of Al Capone, it showed the rise and fall of a man and lends truth to the phrase “Power corrupts”. When the remake came around some fifty years later, there needed to be a fresh story. Enter Oliver Stone. Stone wrote the screenplay and did a damn good job of it, though he had directed a few movies, their less than successful track record left him to be just the screenwriter and not the director. Brian De Palma took the reins after Sidney Lumet signed off after seeing how violent the film was. After seeing this and Carlito’s Way it’s hard to imagine a more powerful pair than De Palma and Pacino.

Roger Ebert comments in his review of the movie that: “The movie has been borrowed from so often that it’s difficult to understand how original it seemed in 1983, when Latino heroes were rare, when cocaine was not a cliche, when sequences at the pitch of the final gun battle were not commonplace. Just as a generation raised on The Sopranos may never understand how original The Godfather was, so Scarface has been absorbed into its imitators.” This is true, of course, and though we’ve grown up with violence, it had to start somewhere. The movie is essentially the life story of Tony Montana (Al Pacino) as we see him from lowly Cuban immigrant that is transformed into the king of the world. He has a fascination with his sister, though controlling and not of incest, and of drugs and power. Together with his friend Manolo (Stephen Bauer), they rise and fall together.

The central theme of Scarface shows the ruins of power, money, greed and essentially every other negative human emotion. Some have compared this version to a modern-day version of Treasure of the Sierra Madre in that once the money (in this case, cocaine) starts to accumulate, that human nature takes over and the power corrupts. No amount of cash, violence or women can satisfy the urge that Tony Montana feels and we know that nothing will ever truly satisfy him. Though a different character than that of Michael Corleone, they are almost one and the same. They’re both bad, though they believe in their hearts that they are doing the right thing and helping those who wouldn’t be helped otherwise. A victim of his own product, the world crumbles around Tony and his empire. This is what some say is Pacino’s greatest role and sports a cast of unknown actors. Mary Elizabeth Mastrantonio and Michelle Pfeiffer to name but a few. Scarface is almost required viewing if you consider yourself a film buff.

Admittedly, this isn’t a film I’ve seen time and again. I’d say that over the years I’ve only sat down to watch the entire film on three occasions. That said, this is undoubtedly the best the film has ever looked. Universal’s new 4K transfer showcases the very best of what the format has to offer. The movie, like Casino, has a vast array of costume changes and like DeNiro’s candy-colored suits so too does Pacino’s wardrobe encompass the spectrum. Detail is something that I immediately noticed and though the film does have a harsh look to it, I found it to look a bit more smooth than previous versions. The film was shot to look a bit on the rough side and we can tell by the deep blacks that give Tony his unique look. The slightest bit of grain is present, though not distracting. The HDR gives us a bit more on the color spectrum and deeper, darker blacks. For a film that’s over three and a half decades old – this is simply a stunning-looking picture.

The upgraded DTS X mix has a depth that I didn’t think possible. Considering the other audio tracks on the disc are in mono, it’s quite the accomplishment. Still, there are some sequences, namely in the nightclubs and a few of the shootout scenes, that really do take full advantage of the lossless mix. Dialogue is at the heart of this movie and I found it to be clear and coherent. Though it might be a bit difficult to understand Pacino’s accent at times, it’s no fault of the audio. While the film really can’t hold a candle to the modern soundtracks, this sounds as good as can be expected for a movie of its age.

This new 4K version features only one new extra and it’s included on the 4K disc. The rest of the supplements are the same as the previously-released Blu-ray which are housed on the set’s second disc.

Both versions of Scarface are classics. The long-lasting appeal of Pacino’s character and De Palma’s work is beyond reproach. Universal’s efforts on this new 4K disc are second to none. The audio and video are top notch, the new features is a bonus (many studios rest on their laurels and don’t offer anything new over the previous version) and the disc is a must for any film aficionado. 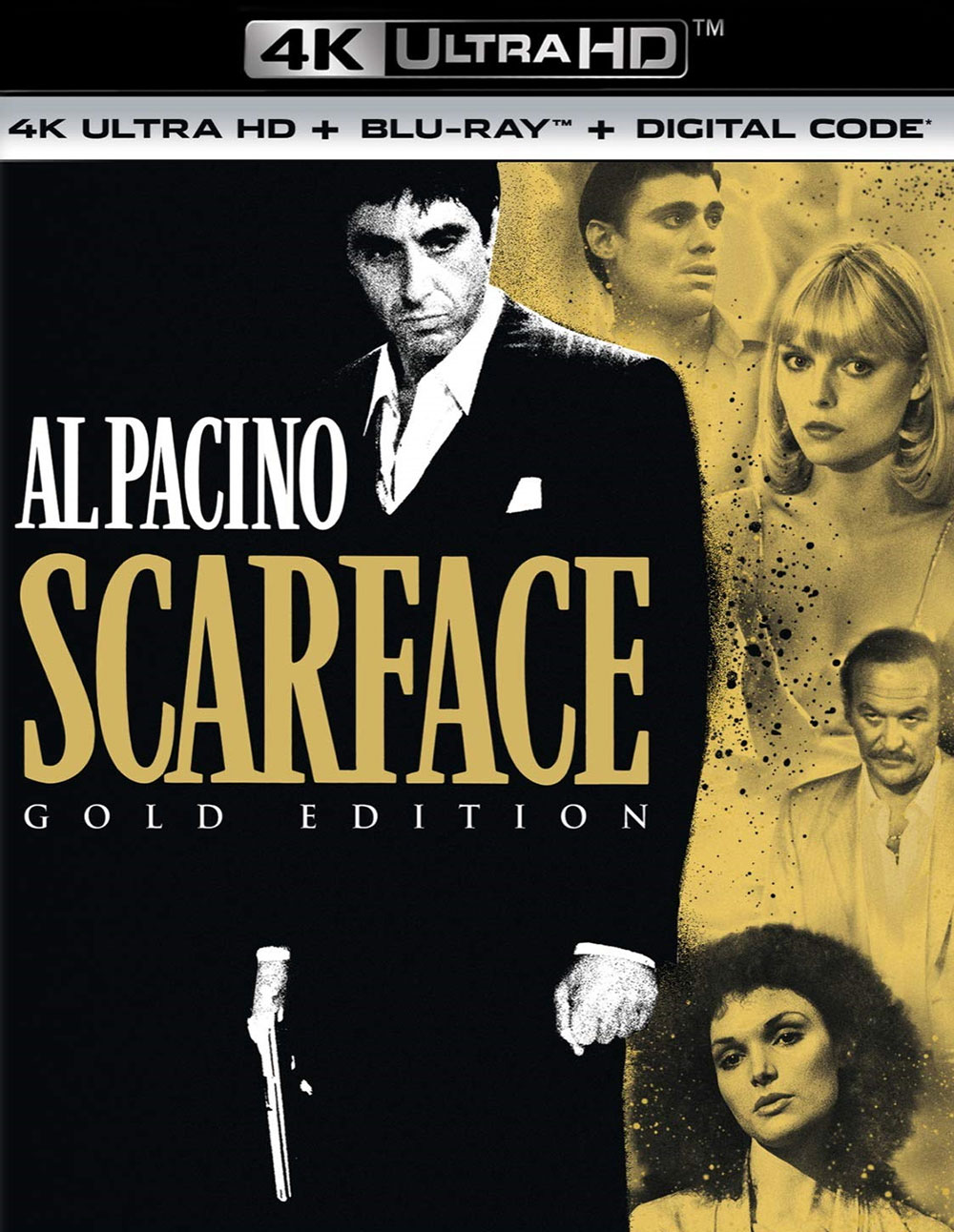