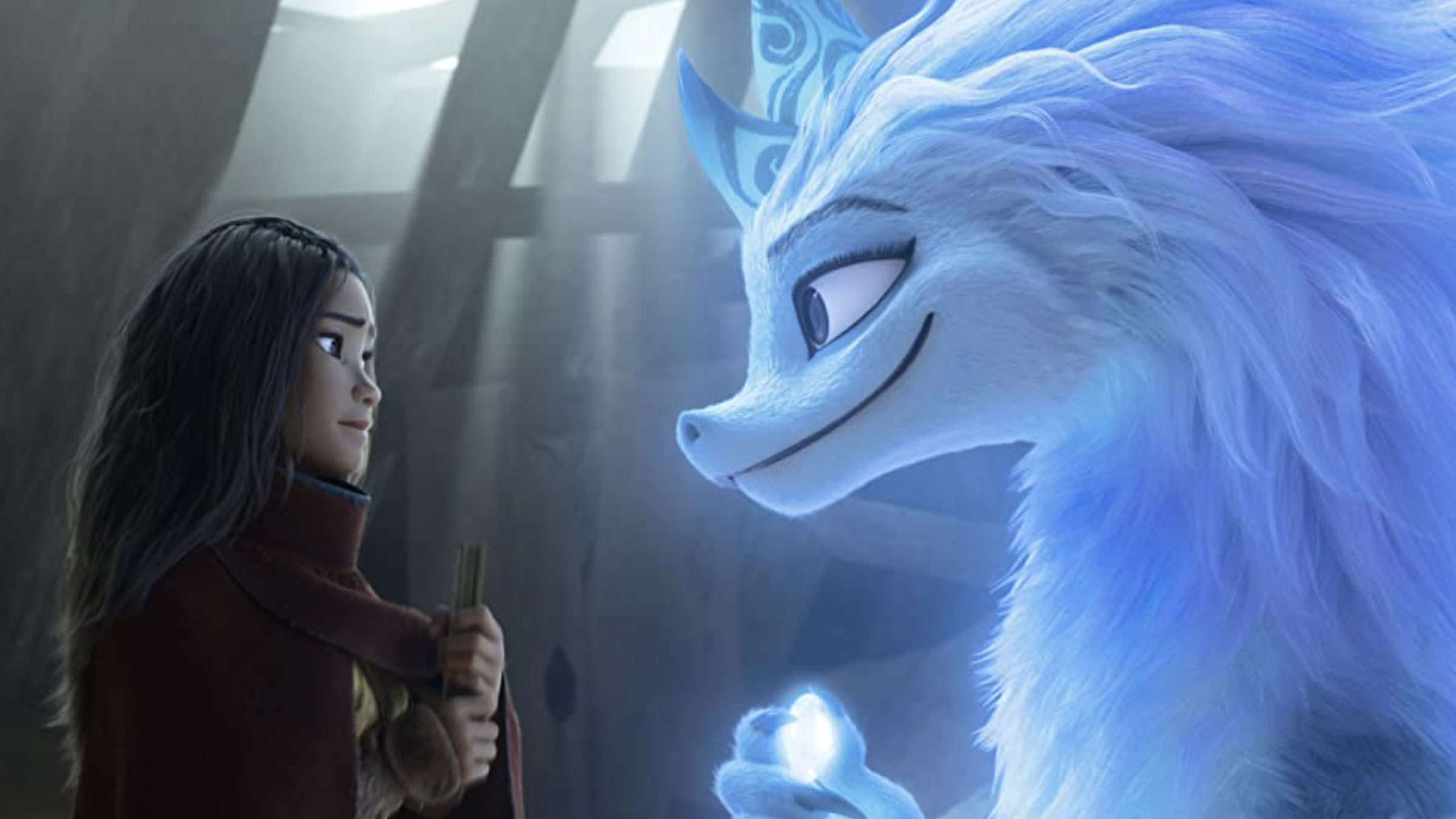 I think I’ve always wanted dragons to be real. Who knows – they might have been. When the vast animal kingdom is considered, it’s not illogical to think that these flying beast could have existed, in one form or another, at some point in history. That and perhaps the best explanation of the “fire breathing” aspect was explained in Reign of Fire or you could read this. At any rate, no matter your opinion on dragos or Disney animation, we’ve got both here. In a world where time stood still, Disney managed to construct an animated movie that delivered the goods. Bear in mind that this is NOT a Pixar film. It lacks some of the sentimentality, but that’s not necessarily a bad thing.

The plot of the film is essentially given to us in the prologue, but for the sake of argument we’ll go into a little more detail. We learn about the kingdom of Kumandra which was attacked by monsters called the Druun. This turned the realm’s protectors, the dragons and most of the humans into stone. The kingdom them disbanded into five separate factions with each blaming the others for the shared misfortune. The Druun have now returned to finish the job and, thanks to a poor decision (based on trust, the central theme of the movie) by Raya (voiced by Kelly Marie Tran). It’s Raya’s dream to fulfill her father’s dream of reuniting the kingdom. To do this she tracks down Sisu (voiced by Awkwafina), the only dragon to have survived the Druun attack. The duo then have to reassemble the pieces of a magic orb scattered across the five factions. There is, of course, an obstacle in the way by the name of Namaari (voiced by Gemma Chan). Things are never easy.

I have to admit, I’d heard good things about the movie before I put the disc in the player, but part of me still wanted to dislike the film. I don’t know why. But once I saw it wasn’t the traditional Disney faire, I became more interested. Raya and the Last Dragon, like Mulan before it, manages to showcase a protagonist that doesn’t long for love or to escape some dismal fate. Yes, there are some of the standard Disney creatures (cute and cuddly) and the entourage of characters, but it is a Disney film, right? The vocal talent involved is top notch as is the story. I really enjoyed it. You will too.

It’s kind of amazing how far animation has come in a short amount of time. Well, if you consider 25 years a short amount of time. I looked at a few of the scenes of this film and they look like stills from a live-action movie. The lines are do precise, the background so detailed it’s like looking at a piece of art on the wall. Disney’s 2.39:1 HEVC 4K image delivers all of this and does it well. HDR is effectively used to provide a near 3D viewing experience. Colors pop, detail is off the charts and I was hard-pressed to find anything that rubbed me the wrong way. This is flat out amazing.

The included Dolby Atmos soundtrack has its fair time to shine as well. There are some pretty intense fight scenes and though the majority of the film is dialogue-driven, I felt the presence of the Amtos mix from. deep within. Yeah, I just said that. Vocals are pure and crisp, surrounds are used effectively and a broad, spacious soundstage puts the viewer in the middle of the action. As I often say with Atmos mixes – zero complaints here.

Raya and the Last Dragon might not be Disney’s best animated film, but it’s good. Really good. I was about halfway through before I realized that the main characters didn’t prance around in dresses and sing songs about meeting the love of their life. And while not a Pixar film, it’s close. Disney’s technical presentation delivers what we’d expect and there are enough supplements to warrant a purchase.