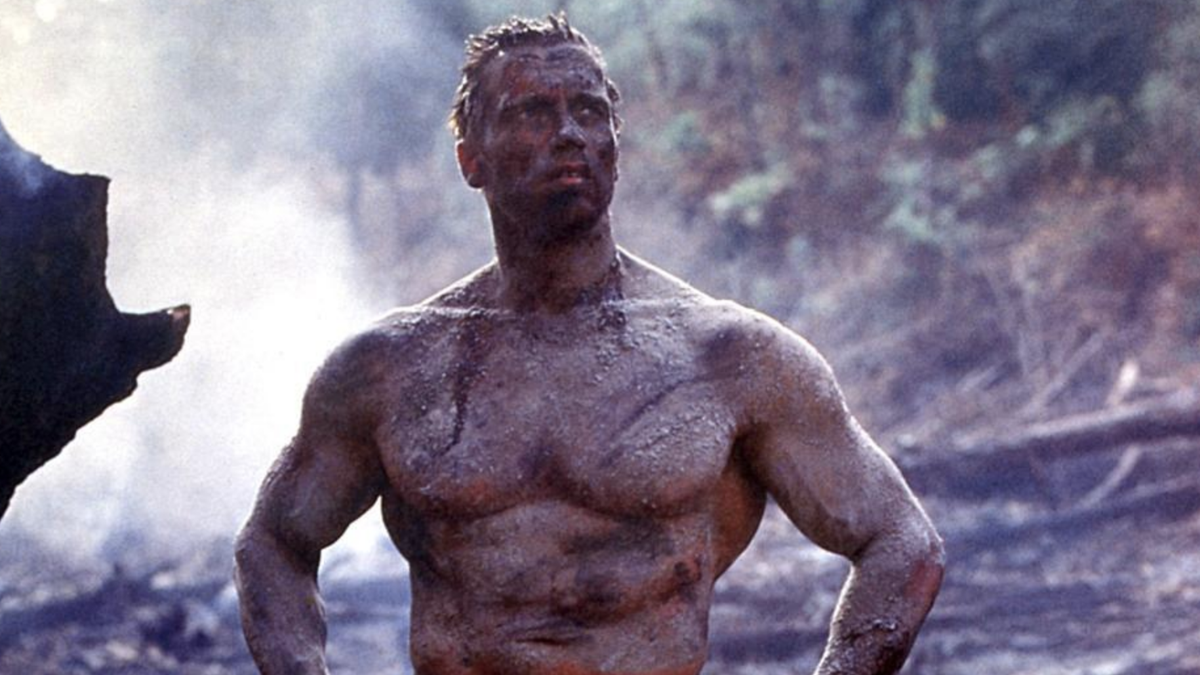 A group of airmen have been shot down and captured in a dense, remote Central American jungle, which makes a rescue quite difficult. But an elite squad of commandos has been assembled, one that has never failed in a mission. In the lead is Dutch Schaeffer (Arnold Schwarzenegger), a tough as nails soldier who never backs down from an enemy, no matter how outmatched or outnumbered he is. At his side is a collection of riotous and skilled mercenaries, each with a certain area of expertise. In other words, an almost perfect team that has been hand chosen to handle intense, high risk missions such as this one. The men land in the jungle and begin the search for the prisoners, but the area is hard to traverse. Even so, the squad soon discovers the base of operations and storms the compound. But the camp isn’t manned, at least it isn’t at the time, though there is ample evidence of violence. The bodies of the airmen are soon found, torn to shreds and decimated like no one has seen before. The sole survivor of whatever ravaged the compound is a woman, who is almost killed by the mercenaries. As the men leave the camp, they begin to notice unusual things, such as movement, even though no one is there. When the men start to be killed off one by one, what force lurks in the jungle that preys upon them?

The movie itself is a fun, over the top action thriller, with some classic lines and some terrific performances. Of course, this is not high art by any means, but for a modern action movie, Predator more than holds its own. Arnold Schwarzenegger tackles the lead and as usual, his turn is enjoyable, but not that impressive. But he handles the action demands and delivers his one-liners well, so I see no reason to complain much. His costars add a lot to the experience too, with such folks as Jesse Ventura, Carl Weathers, Bill Duke, and former porn star Sonny Landham all on deck. The clash between the commandos and the unseen hunter is excellent at times, but you’ll also notice a lot of the usual genre pitfalls. Even so, I always have a blast when I sit down with Predator, even after countless viewing sessions.

Predator is and has been one of Fox’s most popular catalog titles and with the previously-released Ultimate Hunter Edition, there was clearly (pun fully intended) some work to do on the print. This new 1.85:1 HEVC 4K image is far superior to that of its predecessor (also included in this set). The colors are crucial here and from the heat vision to the deep jungle greens, all the hues look excellent. Just as good is the contrast, which yields superb black levels and no visible detail loss. This is a step up in picture quality, no doubt about it and fans just might want to take the plunge for this alone.

With all of the improvements in the picture quality, we do, disappointingly, find the same DTS HD Master Audio soundtrack used on the previous Blu-ray. This is an action movie, so the speakers have a lot of work to do throughout. The explosive sequences pack a powerful punch, with intense and loud presence. The surrounds come full blast at times, putting you right in the middle of it all, with excellent use of the channels. But not just the powerful scenes stand out, as even calmer sequences have been mixed with skill. The jungle atmosphere is brought to life here, with great separation that makes you feel immersed in the wild landscape. The clicking noise that the predator makes, the gunshots, the explosions – they all sound amazing in this DTS mix. I just felt that it could have sounded that much better.

Fans of the film will most likely be a bit let down for a couple of reasons: There are no new supplements on this new 4K disc and the lion’s share of those are on the older Blu-ray (which most will already have). With that said, let’s take a look as to what’s included.

Like so many other films from the 80’s, Predator just…worked. Its long-lasting influence is a testament to how good this movie actually is. The two sequels leave a little bit to be desired, however. Fox has finally done the film justice with their 4K restoration, though with no new supplements and the same DTS HD Master Audio soundtrack, I still feel a bit wanting. Nevertheless, for the video quality alone it’s worth a look.