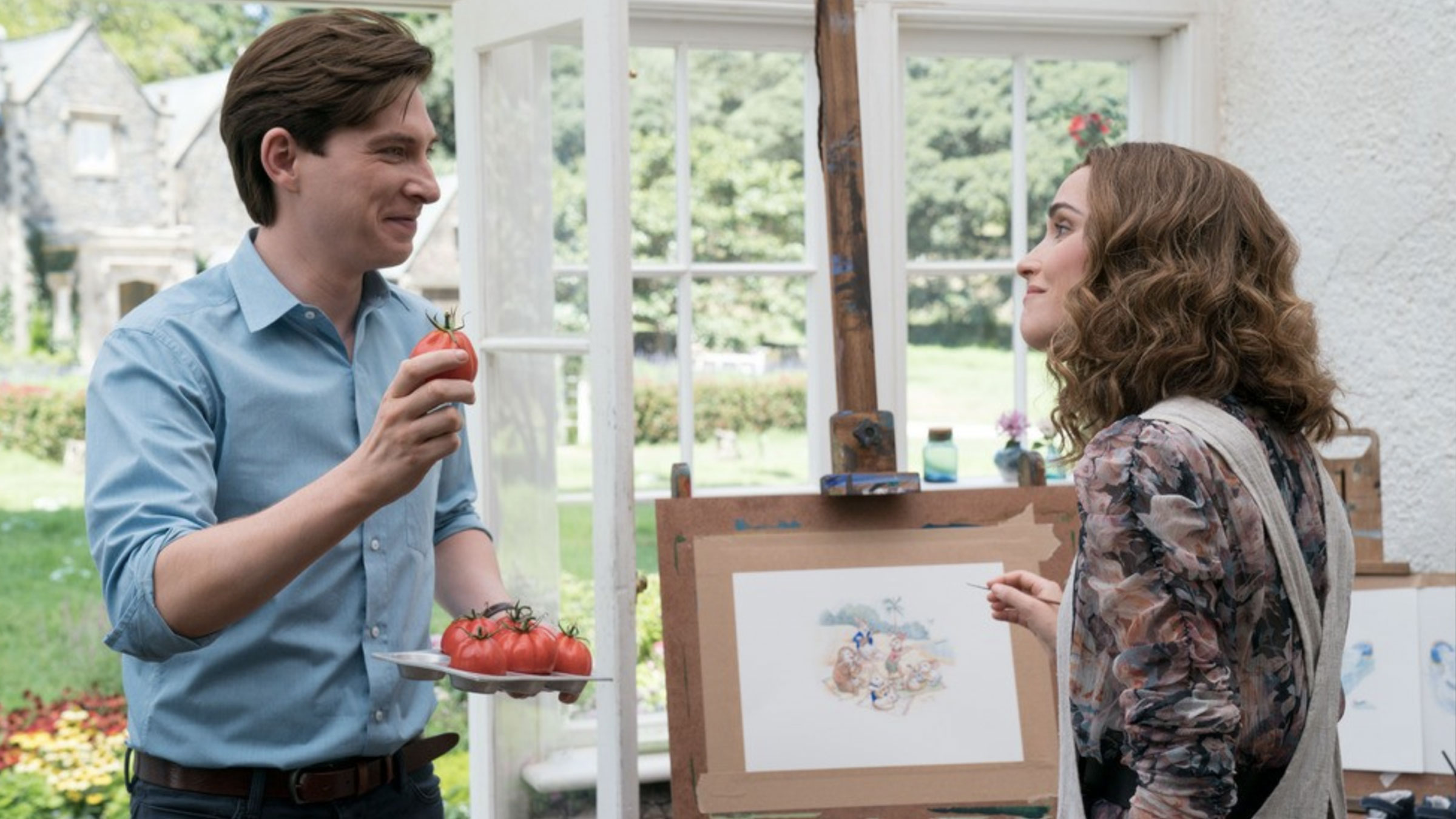 Imagine my surprise when the FedEx guy delivered me a copy of Peter Rabbit 2: The Runaway! Ok, perhaps I wasn’t that surprised since I did request it, but Sony isn’t that reliable when sending me things to review, so I figured “what the hell” and submitted a request. And, yes, this is the title they sent. I walked right into that one, didn’t I? At any rate, given the title of the film and with a little research, it turns out that there was indeed an original Peter Rabbit. That one fell off my radar. But with the success of the Paddington films, it was only a matter of time before we saw more cute and cuddly GGI animals on our screen. At any rate, I had no idea what to expect, but I popped the disc in the player, poured a glass of wine (because I figured I’d “need” it with this one) and off I went. Here’s how it goes…

We open with the wedding of Thomas (Domhnall Gleeson) and Bea (Rose Byrne). Peter (voiced by James Corden) isn’t quite sure how he’ll fit in, especially if little ones are in the future. Bea’s sold her book about Peter and his friends at her shop and low and behold a big time publisher named Nigel (David Oyelowo) wants to take the book mainstream. The leads the crew to London to meet him. They soon realize that he wants to commercialize it by putting rabbits on T-shirts, make sequels in outer space and so forth. Meanwhile Peter meets Barnabas (Lennie James), an older rabbit who runs a group of animal thieves (you read that right). Peter is feeling on the outs with Thomas and Bea and joins up as they plan to rob a farmer’s market of its fruits. His friends, Flopsy (voiced by Margot Robbie) and Mopsy (voiced by Elizabeth Debicki) are involved as well. Will Peter turn to a life of crime or will everything work out for the best?

Spoiler: Peter turns to a life of crime. He starts a prostitution ring for rabbits and gets hooked on smack. Bet you didn’t see that coming, did ya? Ok, maybe that didn’t happen, but I can imagine a world so awesome that it would. Hey, you never know…Ok, anyway, here’s the deal – we all know what this movie will be like before even putting the disc in the player. Peter Rabbit was one of the most beloved children’s tales and it’s now been made (and again) to entertain a new generation of kids. Let’s face it, when you’ve got two characters named “Flopsy” and “Mopsy” you kind of know what to expect. If anything it’ll keep the little ones entertained for  90 minutes before you realize that you’ve got a lot of the day left. Why not watch it again? Follow it up with Hop, while you’re at it. Bunnies. Bunnies everywhere! If you liked the first one, this is more of the same. If you didn’t, why are you reading this?

It’s always tricky when the main character of a film is a CGI-based animal. It would seem to open the door for faults to creep in and, well, ruin the viewing experience. Thankfully that’s not the case with this one and Sony’s 2.39:1 HEVC 4K image adequately conveys the gorgeous-looking transfer. Fine detail is rendered beautifully, giving us a very natural and all around good-looking transfer. Obviously the human aspect of the film looks fine as well, showcasing a wide color gamut, lifelike flesh tones and detail that’s tack sharp. Nothing to complain about here.

Admittedly, the first thing I thought when looking at this film wasn’t “I wonder how good the Dolby Atmos mix will sound.” Frankly, this isn’t the type of film that I’d expect a mix like that to appear on, but I was mistaken. Actually, the Atmos mix works and works quite well. There are little elements here and there, such as when Peter is in the city. Vocals are pure and crisp and directional effects are well-placed making way for a very unique and rich aural experience.

There’s a target audience for this movie and I’m not in it. Admittedly, it’s cute and has a few nice moments but I found myself looking at my watch more often than not. It’s got a great message and certainly Sony’s disc doesn’t disappoint by any means. If you’ve little ones in the house, you could do a lot worse.