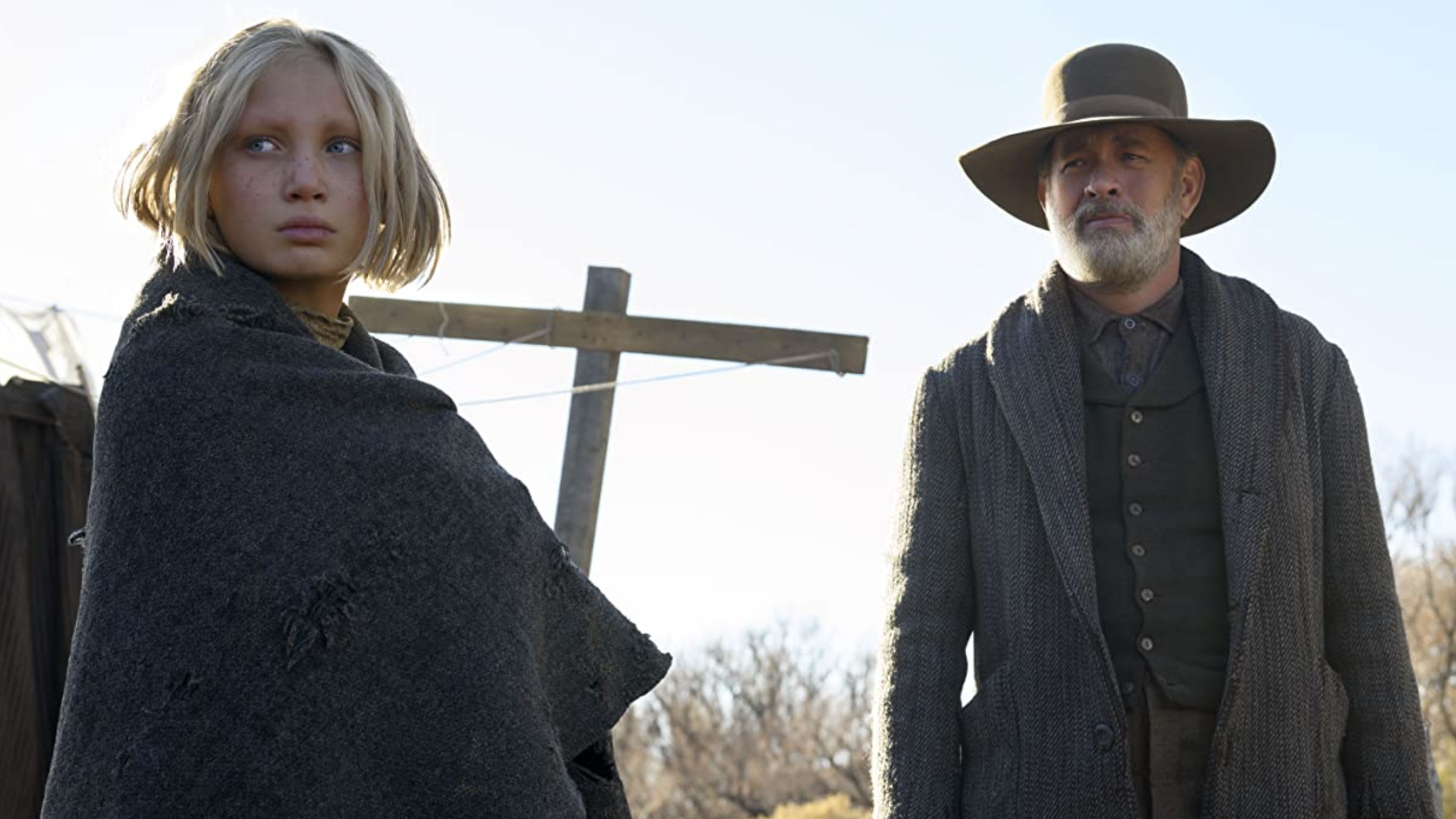 Jefferson Kidd’s (Tom Hanks) life hasn’t turned out as he thought it would.  Kidd was once a decorated war veteran and married, but now is a widower who makes ends meet (barely) by traveling from town to town reading the newspaper to the locals who have neither the desire or (some) ability to do it themselves. While on his travels, he encounters Johanna (Helena Zengel), a 10-year-old girl who has been kidnapped by the Kiowa people. She doesn’t speak English, but it’s learned that she has family in Texas. Kidd takes her under his wing as he realizes that there are those who would mistreat her, namely Almay (Michael Angelo Covino), a former Confederate soldier who offers to buy her. It’s the journey (and, ultimately, the destination) in which we follow and see the relationship between these two form.

It’s a bit odd for me to say, but I think the ability to read is something that I (and most others) take for granted. I find it hard to grasp being in a world where the average adult wasn’t able to communicate other than with their spoken words. Is that odd? I find it odd. And I’ll be the first to admit that this is part of our history that I had no idea about. But when I sat down and thought about it, it did make sense. Moving onto the film itself, it’s really hard to go wrong with the man in front of and behind the camera. Greengrass has made some phenomenal films that are among my favorite and what can we say about Tom Hanks that hasn’t been said over and over. The real show stopper is Helena Zengel – she goes toe to toe with Hanks and it’s that chemistry that makes the film work. She reminds me of Dakota Fanning from way back when.

Generally-speaking, films take place in the “Old West” aren’t always the ones that translate the best on televisions. Granted not everyone had John Ford’s gift for presenting each frame like its own painting, but this one comes close. Universal’s 2.39:1 HEVC 4K offering is simply second to none. The earthy tones set the atmosphere with razor sharp detail, naturalistic flesh tones and the HDR gives this a little more kick that its Blu-ray counterpart. Hanks’ grizzled, white beard is showing the actor’s age, but this really is one beautiful-looking picture. It’s a top notch effort and one that’s indicative of a new to the format disc.

The included Dolby Atmos soundtrack isn’t without a few moments of glory. I found, by and large, that it’s a rather subdued track with bold, sharp vocals that are equally complimented by a robust surround atmosphere. The Atmos track has a certain characteristic that I can’t really put my finger on. The thump of horses galloping, the thunder in the background – everything here sounds excellent and will give the viewer nothing to complain about.

Neither Hanks or Greengrass are known for making “bad” movies. This one is no exception. While it might not be up everyone’s alley, it’s still an ultra-realistic and entertaining look at a part of American history that many of us never knew existed. Universal’s disc is, of course, spot on with stellar audio and video and littered with enough supplements to make it worth a purchase.