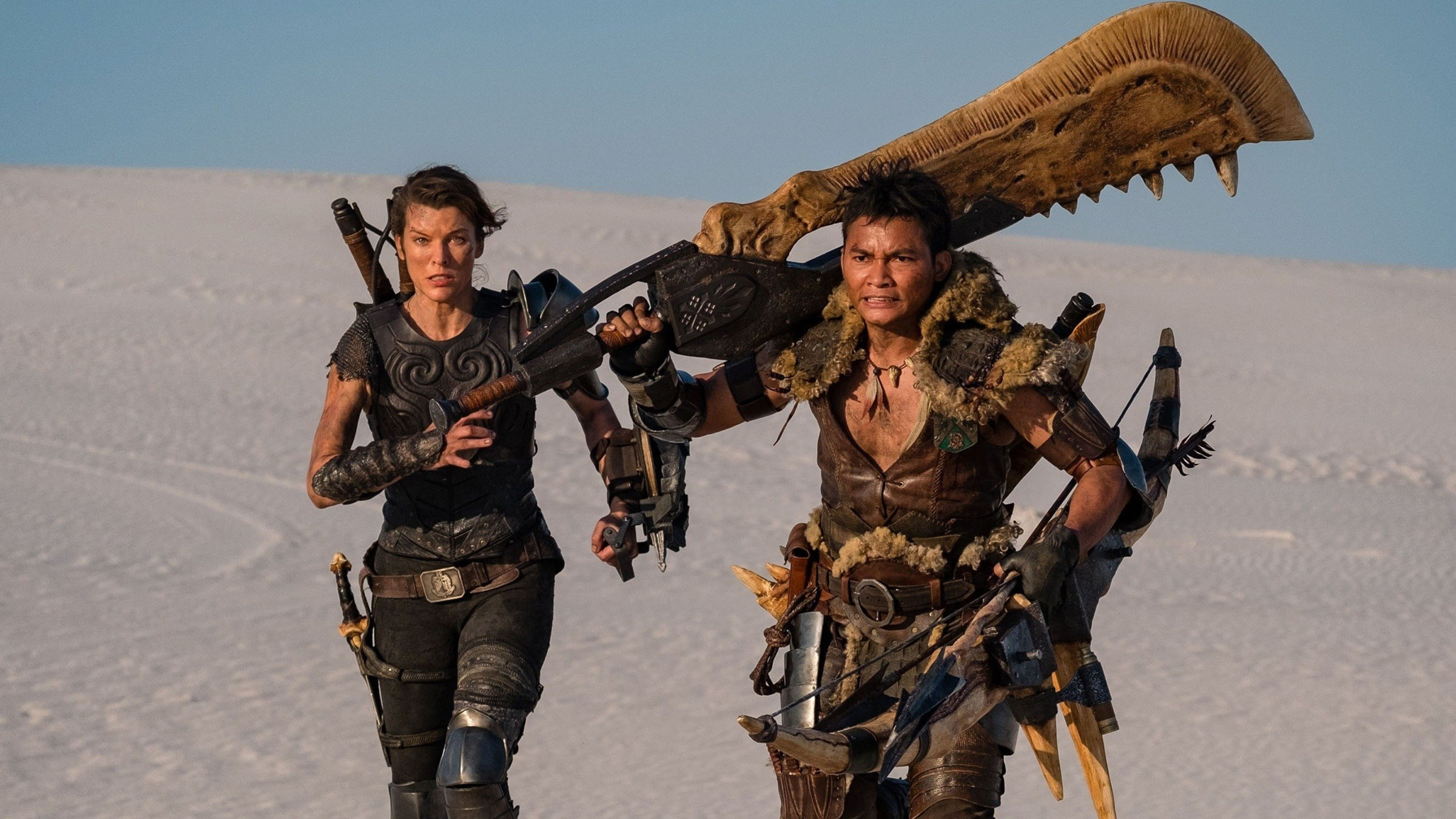 It can either be a really good or a really bad thing when an actor gets typecast. We didn’t see Arnold Schwarzenegger or Sylvester Stallone star in romantic comedies, did we? We rarely see Liam Neeson in a movie that doesn’t have him talking in a hushed tone and shooting the bad guys. So when Milla Jovovich starred in Luc Besson’s The Fifth Element (circa 1997), who knew that it would lead her down a path that would guarantee her work for the next few decades? Then again, who knew that the content of comic books and video games would provide filmmakers fodder for plot after plot for as long? And that’s what we have here. Monster Hunter, based on the popular  Capcom game, isn’t part of the Resident Evil series. It might as well be, but there are some differences. Ready player one? Let’s begin.

There are two worlds: ours and another that’s inhabited by monsters. Lt. Artemis (Milla Jovovich) and her ragtag group of soldiers are searching for a team that went missing. Their mode of transportation becomes lost in a storm that triggers a magical portal. When the dust settles (literally), the group finds themselves in the world of monsters. Artemis and her crew aren’t the only humans in this world. There’s “The Hunter” (Jony Jaa), who doesn’t speak English and can’t explain where he’s from. But, despite this, he and Artemis are able to plot a way out of this world. To make it work, however, they have to slay the end boss monster. Game over?

The films of Paul W.S. Anderson are guilty pleasures. And if you don’t take them too seriously (he doesn’t), then a better time is had for all. And that’s part of the fun with this movie. It knows its audience and what they like and gives it to them in spades. Jovovich and Anderson have worked on countless films together, so it’s clear to see that she knew what to expect of the film and her role. And she embraced it like so many others. Oh, and we have Ron Perlman thrown in for good measure. So, we’ve got that going for us…which is nice.

Since monsters aren’t real, the film does rely on a lot of CGI to portray some of the, uh…characters. Anyway, kidding aside, we know what to expect with this 2.39:1 HEVC 4K image. Colors leap off the screen, detail is nothing short of perfection and we get a color palette that looks just a bit better than its Blu-ray counterpart thanis to some HDR.  Blue skies look great, dark scenes have no faults and so forth. Sony does perhaps the best job with their 4K titles and, for many, this could be reference-quality material for demonstration. Simply put – it’s perfect.

I don’t care how many speakers you’ve got in your home theater setup, or in what configuration. Sony’s Monster Hunter comes equipped with a Dolby Atmos soundtrack that will keep any and all of them busy during the 100 minute runtime. Vocals are sharp and crisp, surrounds (all of them) are constantly churning out the sci-fi goodness and the front stage is plenty active. The atmospheric mix creates a stunning aura that’s sure to please most any audiophile. Things blow up, guns are fired – you know what to expect with this one. It delivers on every level. And every channel.

If you’re a fan of Milla Jovovich and Paul W.S. Anderson (and if you’ve watched this, we’ll assume you are) then you’ll be right at home. This isn’t a Resident Evil movie, but…it’s a Resident Evil movie in spirit. To its credit, the film does what it’s supposed to – provide a good escapist film that’s entertaining. Nothing more or less. Sony’s 4K disc looks and sounds amazing, as expected.