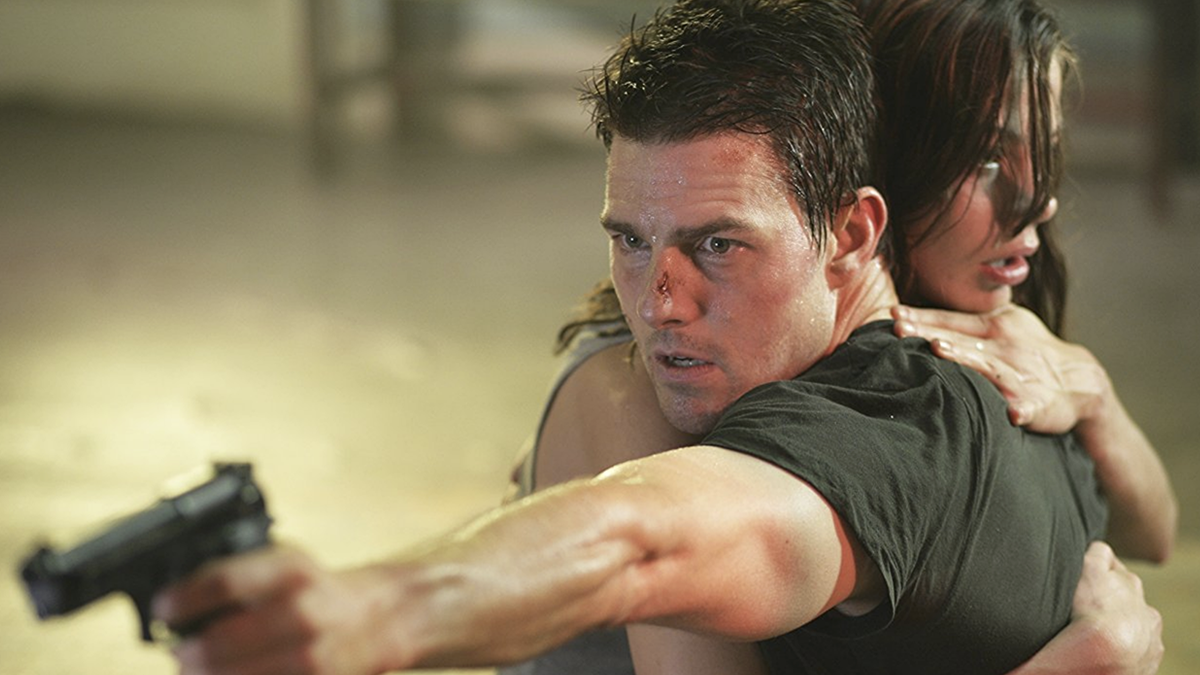 Has it been over twenty years since Mission: Impossible? Evidently it has. I can remember the then less annoying Tom Cruise doing his media blitz and saying how this movie was his first all out action movie. Well, ten years and two sequels later a lot has changed for Mr. Cruise. The Mission: Impossible movies have always been entertaining for me and, much like the James Bond movies, if you suspend your disbelief and just sit back and enjoy the ride – odds are you’ll have a good time. This is the case with the latest installment in the trilogy; directed by “Lost” and “Alias” director J.J. Abrams. Not a bad way to start off your movie directing career, huh? Mission: Impossible III gives us a few things: an all-out action movie that leads the MI crew all over the globe and more of an insight to the private life of Ethan Hunt (Cruise). The crew is a bit different this time around with one of the most beautiful women in the world in a supporting role (that would be Keri Russell), Ving Rhames, Lawrence Fishburne, Michelle Monaghan and fresh off his Oscar win – Phillip Seymour Hoffman. Add it all up and you’ve got yourself a summer blockbuster.

In this installment we learn that Ethan Hunt (Tom Cruise) has left his role in the field and is now in charge of training new IMF agents. His first was Lindsey (Keri Russell) has been captured while surveying arms dealer Owen Davian (Phillip Seymour Hoffman). Davian is the prime antagonist this go round and we quickly learn that he’s an icy and remorseless villain with little or no conscience. The IMF taps Ethan for a rescue mission, but things get complicated as Hunt’s fiancée, Julia (Michelle Monaghan) has no idea of his past or present as a spy. It’s up to Ethan to re-assemble a team which includes Luther (Ving Rhames), Declan (Johathan Ryhs Meyers) and Zhen (Maggie Q) to rescue Lindsey, stop Owen from obtaining the “Rabbit’s Foot” and naturally – save the world again. Is it all that easy? Of course not. Plenty of chases ensue and the action rarely stops in what is perhaps the best of the three “Mission: Impossible” movies.

Regardless if you’re a fan of these movies or not, they almost beg to be seen. The first was criticizes for being too difficult to follow the plot (hint: it’s been a decade and I’ve nearly got it figured out). The second had too much of John Woo’s stylistic touch and did what most sequels do, too much action (if there is such a thing). This latest installment has not only solidified the movie as a franchise, but the more character-driven script really gives us more of an insight into the life of Ethan Hunt while still providing us with the action that we line up to see.

The film came out in 2006 and was one of the few that we reviewed on the short-lived HD-DVD format. With this new Ultra HD, the transfer literally leaves nothing to the imagination. Every scene is razor sharp, the colors almost literally leap off the screen and we get to see every detail of every pore in every actors face. That’s been remedied here and the image is never compromised for an instant. Mission: Impossible III looks the part thanks to the increased clarity, color detail and contrast provided by the 4K format.

Again, with the Dolby TrueHD soundtrack! There are films older than this that have great-sounding Atmos mixes, but evidently that’s not going to be the case here. That’s ok, because what we have here is a great-sounding, robust track that gives every speaker a chance to flex its muscles. As you might imagine, there are plenty of pure action sequences that usually result in a car chase, a boat chase or at the very least something blowing up. Like its predecessors, it’s by no means “bad”, but it could sound so much better with a next generation soundtrack. Still, I’ll take this on 4K than waiting on it to arrive with an Atmos mix.

No new supplements have been added to this set, but the three disc set is essentially concurrent with the previously-released Blu-ray set.

This features the same commentary track found on the 4K disc and is identical to disc one of the previous Blu-ray release.

Mission: Impossible III is one that I hadn’t seen since it first came out on HD-DVD (and as of this writing, that’s been a dozen years). I remember how much I really enjoyed it with a memorable performance from the late Phillip Seymour Hoffman. It also acts as a segue to the “newer” Mission: Impossible films introducing us to Simon Pegg’s character. Directed by J.J. Abrams, it has its own flare and, of course, looks and sounds great.