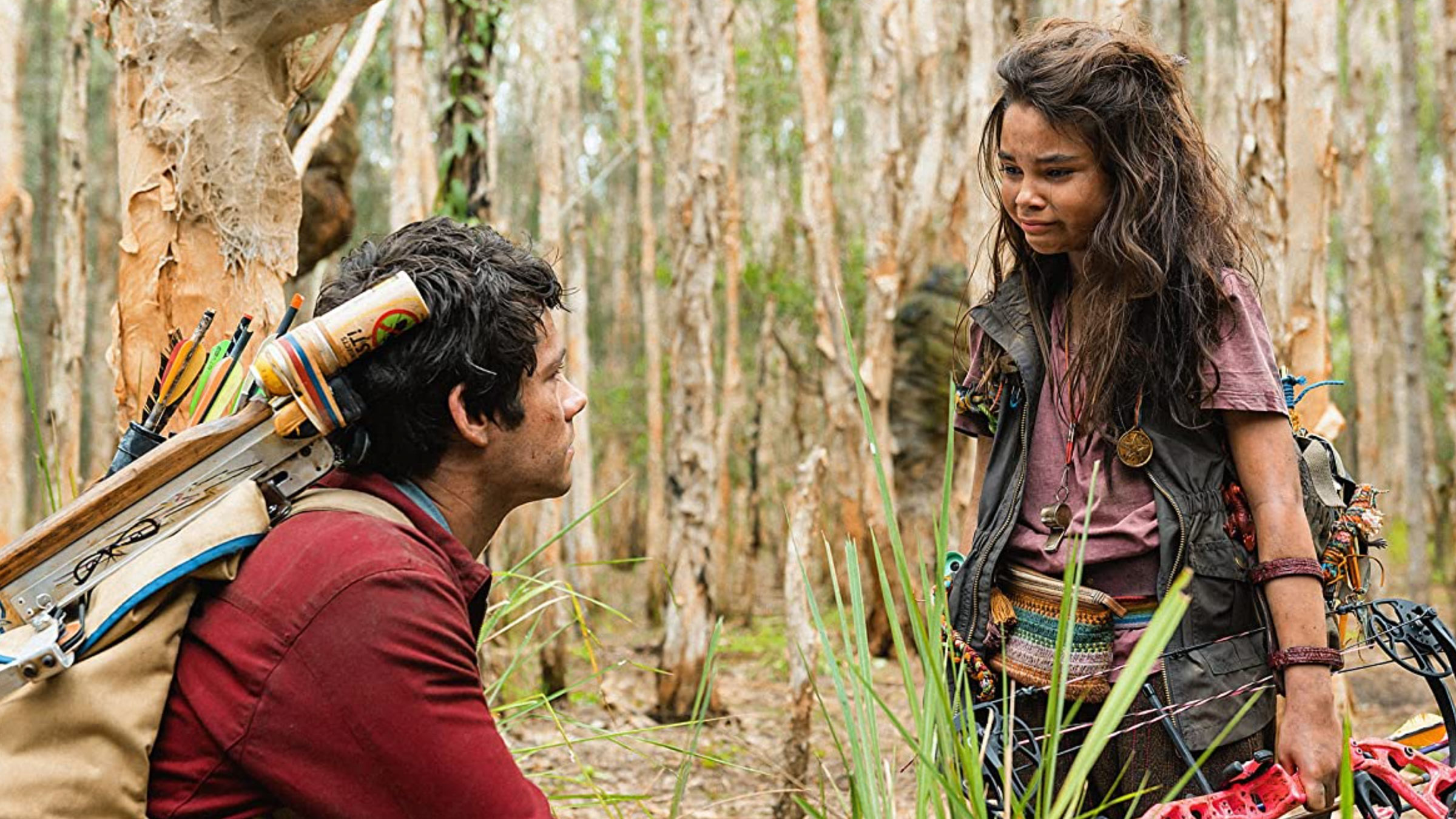 I have to wonder what the world of cinema would be like had Suzanne Collins not written The Hunger Games. That film inspired a few other trilogies of teen post-apocalyptic epics like Divergent and The Maze Runner to name just a few. While those started out fine, they eventually dwindled. But those were several years ago and now we’ve got Love and Monsters. Just think – a movie that you can watch with your wife/girlfriend and you’ll both be equally satisfied! Director Michael Matthews has followed up Five Fingers for Marseilles with this, an offbeat post-apocalyptic film with giant bugs. How’s that for a change of pace? Enough talk, let’s see some giant bugs!

An asteroid was heading towards the Earth and chemical weapons were deployed to destroy it. That worked, but there was an odd fallout that killed off a large majority of the population and, as a result, turned certain creatures (bugs and amphibians) into giant-sized man-eating creatures. The story focuses on Joel Dawson (Dylan O’Brien). Prior to the asteroid, he and his then girlfriend, Aimee (Jessica Henwick) got separated. He now lives in an underground bunker where he’s the cook. Occasionally talking to Aimee on the radio, he learns that she’s only a mere 80 miles away at another bunker. Joel decides to leave the safety of his “home” to venture out and find her. Peril awaits him along his journey.

As I noted above, the post-apocalyptic movie genre has exploded over the last decade or so. And it’s a genre that I don’t really tire of. But there was something about this film that attracted me to it. Granted, Dylan O’Brien has experience in this type of film, headlining The Maze Runner series of films (those too, kind of fell by the wayside). But the film works if you can’t decide if you want to watch a romantic comedy or a horror movie. Why not have both? I mean, this does satisfy two totally different genres and it seems to do so with relative ease. There’s just enough action to make it interesting and, thankfully, the “bugs” aren’t the focus of the story – rather they’re used just enough to keep it interesting. I found this one enjoyable.

The film hits 4K looking absolutely perfect. The 2.39:1 HEVC 4K image literally has no flaws. The majority of it takes place underground with the last half in the jungle and beaches. Yes, there are CGI bugs and frogs, but they look realistic. I’ve recently seen some films from the late 90’s and it’s amazing how much CGI has progressed in only a couple of decades. Flesh tones are warm and natural, detail is razor sharp (dirt and grime prevail on the faces) and the entire color spectrum is represented. The HDR gives the 4K version a little bit of an edge over its Blu-ray counterpart, also included in this set.

While a film like this might scream for a Dolby Atmos or DTS: X mix, we’re left waiting and wanting. That’s not to say that the included DTS HD Master Audio 7.1 mix doesn’t have its share of thrills – it has some amazing effects. I found the surrounds humming away almost constantly while the front stage nicely complimented what was going on in the background. Vocals are pure as well. I don’t think I’ve ever seen a movie in which a bullfrog activated the LFE, but there’s a first time for everything. This one won’t disappoint.

This one’s tricky for me. On one hand, I really did enjoy the film. But the way it ended, it essentially sets it up for a sequel (and, most likely, a trilogy). Given the way some of other films in this genre have gone, I don’t want to get my hopes up for another. Still, Paramount’s disc is technically superior though it’s a bit light on supplements.