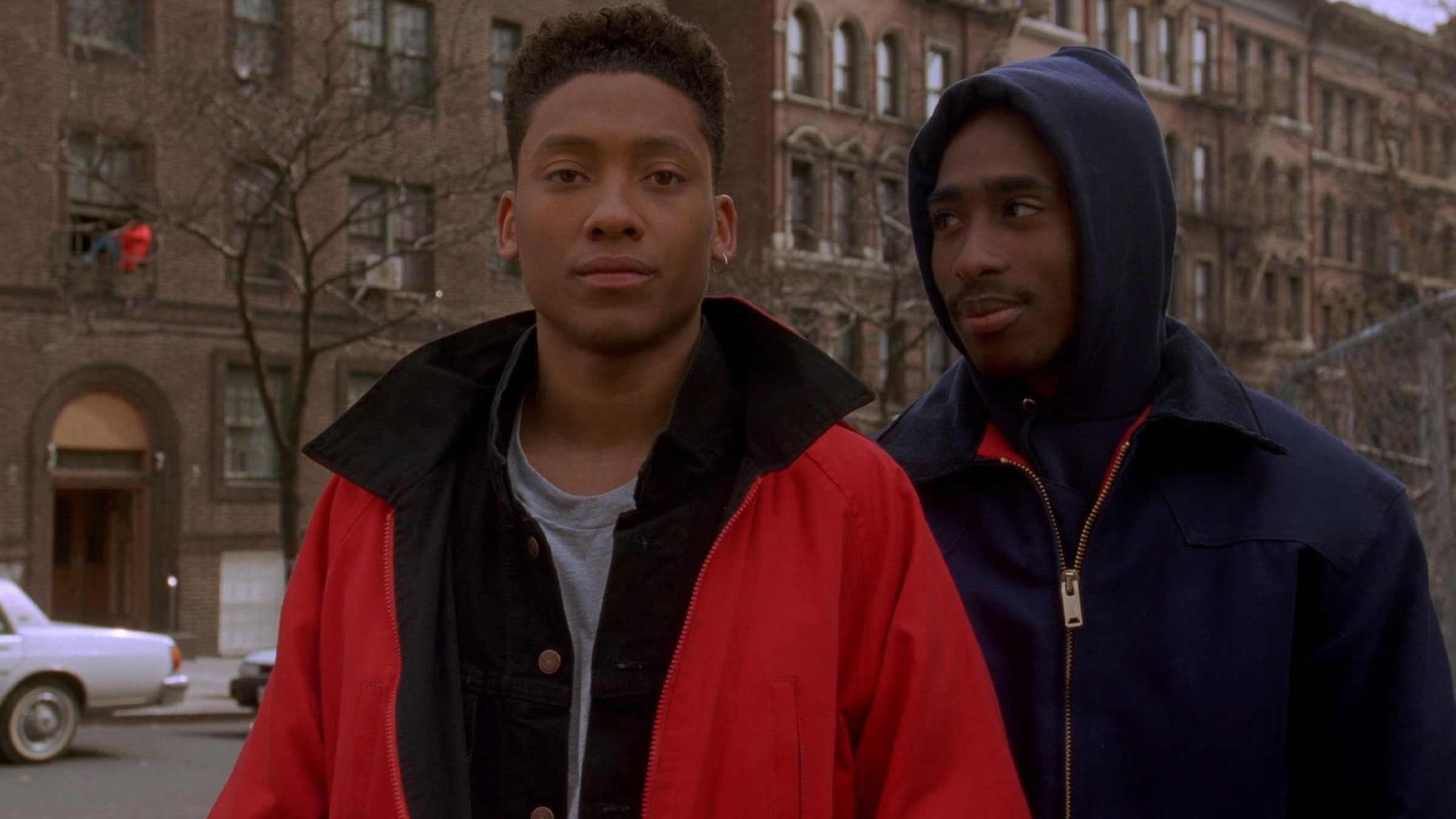 When I started this site in 1999 a “25th Anniversary Edition” of a movie dated back to 1974. That’s now over forty years old and as I so often say – time flies.  Being totally honest, I’d never seen Juice. It’s a title that I recognize simply because I passed it in the video store (yes, video store – for those of you born after 1990, those were stores you had to go to in order to see a movie). But for whatever reason, I never picked it up and watched it. Looking back at the early 90’s, it was littered with “urban” dramas that featured predominately black casts. There was Spike Lee’s Do the Right Thing, New Jack City, Boyz N’ the Hood and Menace II Society. Those all came out in a 3 year span and Juice fit succinctly in the middle. Though the themes in these films do tend to vary, the underlying message remains the same – life in the inner city wasn’t (and still isn’t) easy.

Q (Omar Epps), Bishop (Tupac Shakur), Raheem (Khalil Kain), and Steel (Jermaine Hopkins) are four Harlem friends who spend their days skipping school, getting in fights, and casually shoplifting. The only one who shows some promise is Q who has aspirations of being a deejay. Tired of living in fear, fighting off rival “gangs” and not getting respect – they decide to get some street credit and knock over the local liquor store.  Things don’t go as planned (do they ever?) and in an after-crime fight, Raheem is killed by Bishop. Bishop then spirals into a pit of paranoia and hostility, fearing that Q and Steel will turn him into the cops. Q, sensing the threat, has to think quick and act quicker, lest he be the latest victim of Bishop’s malice.

Juice was shot on a small budget ($100K, paltry by today’s standards) and ended up raking in over $20 million domestically. The cast included all relative unknowns and it was Tupac Shakur’s performance that stood out. In an unfortunate turn of events, Shakur would tragically be killed a few years later in Las Vegas due to a gang-related feud. Director Ernest R. Dickerson, best known for being Spike Lee’s Director of Photography, put something special together here. With the help of producer David Heyman (the Harry Potter series), this provided an outlet for some very young talent. Look for a pre-Pulp Fiction Samuel L. Jackson and a blink-and-you’ll-miss-her cameo by Queen Latifah. While not quite up there with one of my favorite films: New Jack City, Juice was ahead of its time and has withstood it well.

I’d remarked in my review of the 25th anniversary edition that “…there was no mention of a 4K treatment.” Well that, as of this writing, was nearly five years ago. And here we are, now, with a 4K version of this 90’s classic. And, in truth, that’s really the only reason to upgrade to this version. The 1.85:1 HEVC 4K image offers a slight uptick in picture quality with some HDR offering up some blacker blacks and whiter whites. Still, there was a layer of grain that somewhat made my eye twitch. I realize that there’s only so much they can do with any restoration and maybe Juice isn’t (and obviously wasn’t) at the top of Paramount’s priority list, but the film still has a very sleek look and feel to it.

A new DTS HD Master Audio soundtrack has been added for this inaugural Blu-ray and it’s a perfect compliment to the jazzy, hip hop soundtrack that plays throughout. Dickerson references Hank Shocklee and the Bomb Squad in the commentary for their work on the soundtrack and it shows. It’s an interesting mix (pardon the pun) that really sets the tone and the mood for the film. That said, the dialogue was a little soft and it made the movie sound dated. I had to turn it up in a few sequences to get it how I liked it. Then again, given the budget and age of the film – I doubt we’ll have many complaints.

All of the same extras from the 25th anniversary edition are here. Nothing new has been added.

In 2017 Paramount put out a pretty good version of this film with a new transfer, new audio mix and a wealth of supplements. A few short years later we’ve got…essentially the exact same thing. Yes, we now have this movie in 4K but I’d not recommend going for the upgrade. I mean, really, how many times per year are you going to bust our your 4K copy of Juice and give it a spin? I suppose if the answer to that question is “more than once” then this is for you. For everyone else – save your money.