The casting of Joaquin Phoenix as Joker was certainly newsworthy. He had big shoes to fill with the likes of Jack Nicholson and Heath Ledger (who won an Oscar for his role) having previously played the iconic villain. But as the movie was filmed and its subsequent box office release (and success) I had to keep wondering to myself…why? That’s not to say that every film out there has to have a reason, but I just kept scratching my head wondering what the motivation was for this film. And, after viewing it, I’m not really any closer to an explanation. It’s no secret that outside the Wonder Woman films, the DC Universe isn’t taking off like Marvel’s, so maybe this is a way to jump start some interest in that? I have no idea. Suffice it to say that with some obvious Martin Scorsese references and Robert De Niro in the cast, maybe watching The King of Comedy would be a better viewing choice? An argument for another time, perhaps. It’s showtime!

Arthur Fleck (Joaquin Phoenix) suffers from mental illness and this is perpetuated as he sees his city’s moral decay around him.  He takes care of his mother (Frances Conroy), he’s fired from his job (as a clown) and to top it off his aspirations towards becoming a stand up comedian aren’t taking off.  Arthur is obsessed with a late night television host, Murray Franklin (Robert De Niro) and believes that a local billionaire, Thomas Wayne (Brett Cullen) to be his long lost father. There’s a lot of inner (and outer) turmoil in Arthur’s life and in some ways parallels that of Travis Bickle in Taxi Driver. It doesn’t take a genius to connect the dots in the Todd Phillips – Robert De Niro – Martin Scorsese triangle.

There’s symbolism here, to be sure. And Arthur Fleck is the embodiment of the socially awkward loner who might just shoot up a place if adequately provoked. And Joker does provide us with some groundwork for what we know will happen with the Wayne family. I don’t know, though. This is a tough one. On one hand I really wanted to like the film, but after having seen it I just can’t stand up and cheer. Phoenix’s performance is great, though I felt that it was just a series of scenes and not one cohesive performance. How many times can one character dance for no reason? Ultimately, I found the film didn’t really deliver, but there are plenty of others out there that feel the opposite. It’s a character study, for sure, but I felt that I needed a character to study.

Comparing a movie like this to a CGI fest like Avengers: Endgame is about as night and day as one could get. Warner’s 1.85:1 HEVC 4K offering is naturalistic enough, but I found it somewhat flat and unimpressive. Granted, the film is shot in a way that doesn’t exactly utilize every color in the spectrum, rather it’s intended to look bland and, well, uninviting. In that respect it succeeds. Detail is tack sharp, we see some extreme close-ups of Phoenix both in and out of his “joker” makeup. The backdrop of Gotham looks stunning as well. By comparison, the 4K does have an edge on its Blu-ray counterpart, though the difference is so minimal, it’s really not worth the extra money.

Unless you simply need to have a 4K version of this in your collection, you won’t get cheated when it comes to the audio. Both the Blu-ray and the 4K disc contain the same Dolby Atmos soundtrack. For some reason, however, this one never really seemed to get going for me. Certainly it doesn’t sound “bad” by any means, but it was like waiting for the punchline of a joke that’s never delivered. Maybe I was so spoiled by the Batman movies that this one sounds tame by comparison. Nevertheless, ambient sounds do manage to penetrate and deliver some much needed ambiance in a few scenes and vocals sound as they should – rich and sharp. Don’t expect an audio powerhouse here, though.

Joaquin Phoenix is a talented actor, there’s no denying that. I found it hard to classify Joker as a “superhero” movie, though. It’s an allegory for what’s going on in the world today (minus the dressing up as a clown part), and there are tiny hints at the DC universe. Much like Venom, it’s an origin story for something that wasn’t really needed. Warner’s 4K disc looks and sound great, though for a movie that grossed $1 billion I found the supplemental features trite and unsatisfying. 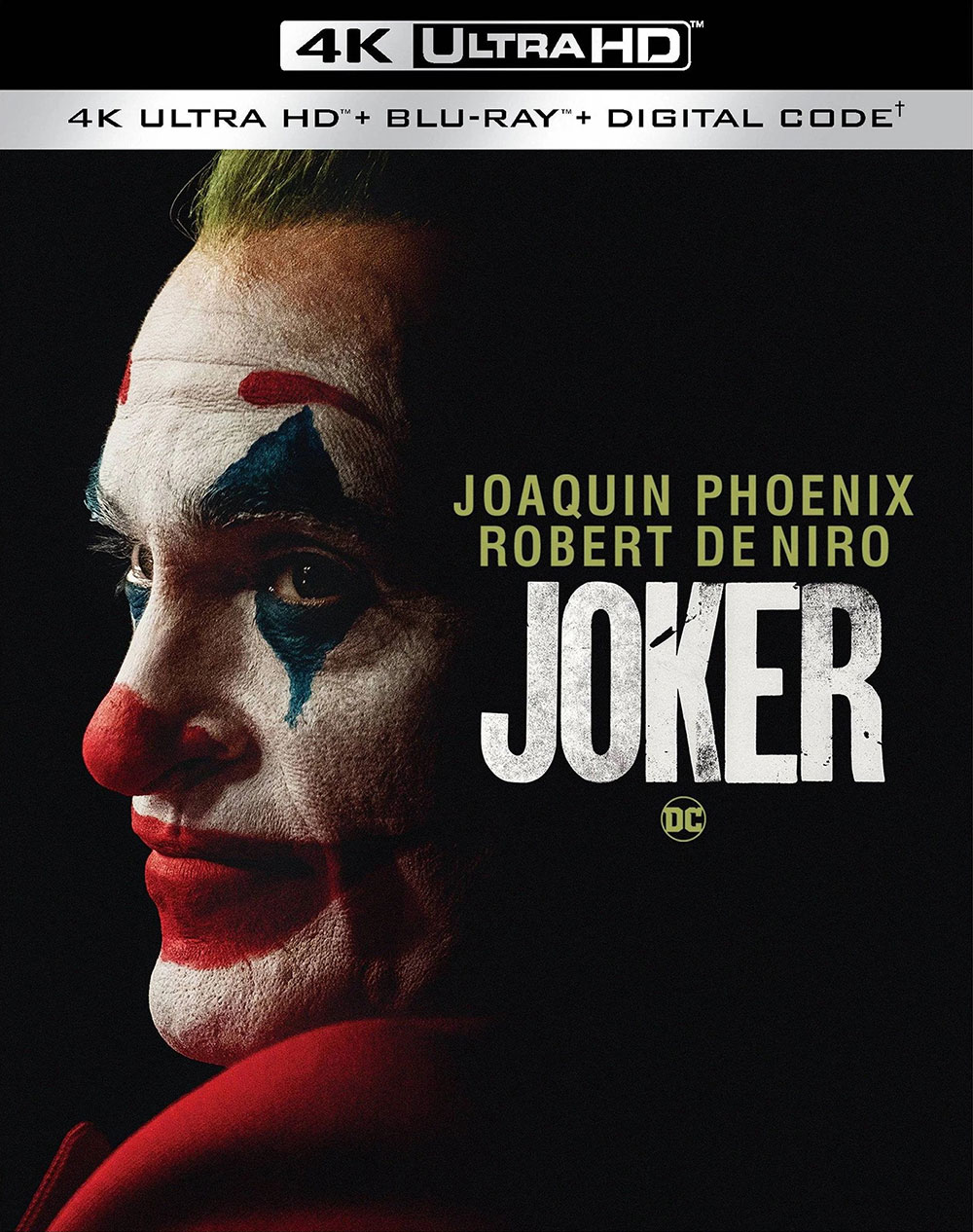