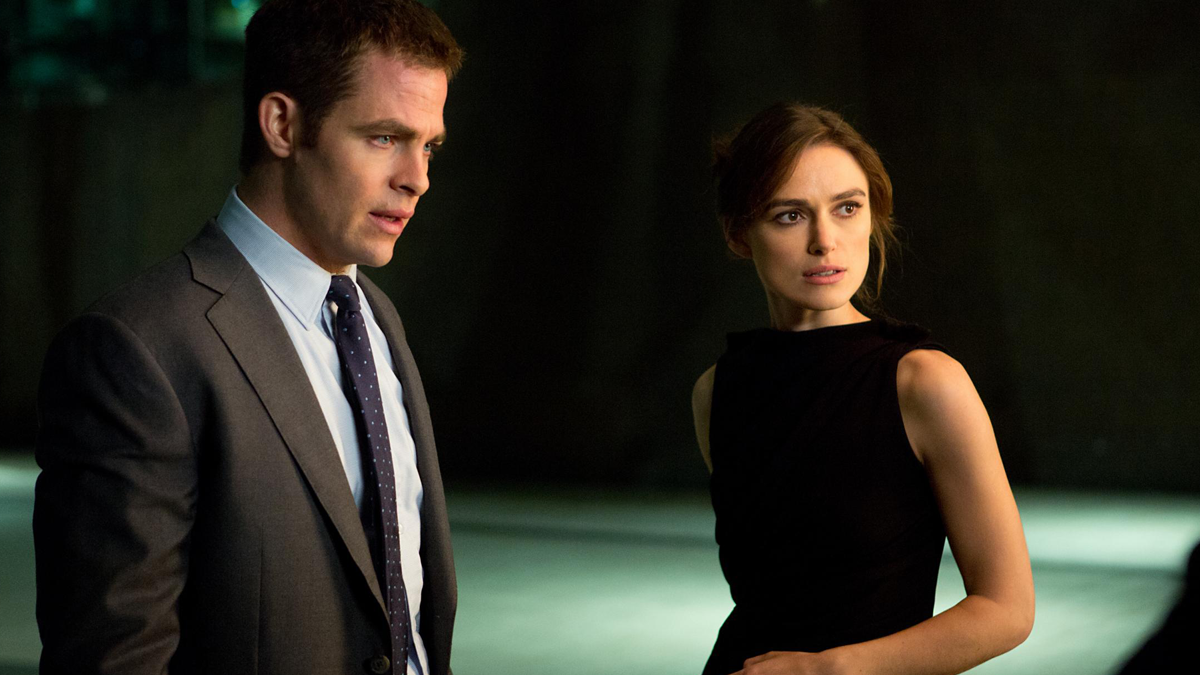 Jack Ryan. Just saying the name conjures up images of Alec Baldwin, er Harrison Ford, actually make that Ben Affleck.  You know what, I don’t even know who the real Jack Ryan is!  Ryan, a character created by the late Tom Clancy, was the epitome of the Cold War and America’s answer to James Bond.  Of course Bond has had many more films and only a few more actors portray him over the years, but if the British can have Bond – we’ve got Ryan.  Before I go on a tirade about Hollywood and their constant re-making of films, I’m always a bit intrigued to see their “reboots.” Though I’m pretty opposed to re-making a film, I’m actually in favor of it if done right. Take The Bourne Legacy, for example – I loved what they did with that and it not only produced a new film, but it was done in a way that was very unique and clever.  It’d been nearly twelve years since we’d seen Jack Ryan on screen (Ben Affleck taking on the title role in The Sum of all Fears) and we meet a newer and much younger Jack Ryan. Was it worth the wait or should they have pulled the plug on this hero around the turn of the century?

Chris Pine (of Star Trek fame) plays Jack Ryan, a young Lieutenant in the Marines whose helicopter is struck by a missile, nearly killing him. With the aid of Dr. Cathy Muller (Keira Knightley), Ryan and Muller are shown a decade later as a couple, and an unmarried one at that.  Ryan, now a financial analyst, notices a large amount of activity and finds anomalies in the accounts of a Russian named Cherevin (Kenneth Branagh). Wanting answers, Jack (also employed with the CIA) travels to Russia to investigate. Obviously things go from bad to worse as his life is immediately in danger and it doesn’t help when Cathy surprises him by showing up unannounced in Russia. It’s then discovered that Cherevin’s plan is to topple the global economy…unless Jack Ryan can stop him.

I was always a passing fan of the Jack Ryan movies (I never read the books), though I have to say that my favorite of the five films is Patriot Games – and only that because as a resident of Annapolis, Maryland, some of the scenes were shot around the United States Naval Academy. Ok, my reasons go beyond that, it did have a pretty good cast with Sean Bean, James Earl Jones and Harrison Ford leading the way. Clearly Paramount is trying to re-ignite the Jack Ryan franchise and I found the film to be above average at best. I think had it not had the “Jack Ryan” label attached to it, it’d just be another action film, but with the history of the character there was a bit more to this. In much the same way Live Free or Die Hard was just another film, it had the recognizable face of Bruce Willis to set it apart from other films. Fans of the franchise will no doubt enjoy the film, but is it enough to churn out another film?  I think not.

As the newest entry in the Jack Ryan films, this one had the least to go (or prove) with the leap to 4K.  What subtle imperfections I found in the Blu-ray have been rectified here, with a smooth, film-like luster that’s sure to please. Colors are bolder and seem to have more life, though some scenes do still display a small amount of grain. I have to assume this was the filmmaker’s intent. Colors seemed a bit on the saturated side and detail is, as expected, amazing.

A perfect opportunity for a Dolby Atmos track has been missed. This contains the same DTS HD Master Audio mix found on the Blu-ray. That said, one thing that wasn’t lacking was the robust DTS HD Master Audio sound mix. There were a few scenes that really made the room shake and as an action/adventure movie, I can say that there are more than a few of these scenes. Vocals are rich and crisp, Kenneth  Branagh’s Russian accent might use a bit of work, but that’s a testament to the sound itself.  The LFE do play a part in the film as we’re treated to a car chase scene, a helicopter blowing up and several gunshots fired.  Surrounds are always present as well, even providing some background ambiance in an otherwise boring business office – how’s that for use!

All of the supplements that were on the Blu-ray are still intact. The only feature that made the leap to the 4K disc was the commentary, though you have to choose the Settings menu option to find it.

It’s been nearly three decades since the first Jack Ryan movie and in that time he’s been played by Alec Baldwin, Harrison Ford, Ben Affleck, Chris Pine and as of 2018 John Krasinski (on television). That’s six films in 30 years – not exactly on James Bond pace, are they? Still, I found this newest film entry fun to watch after a few years. As of this writing, this is only available as part of the Jack Ryan 4K Collection.