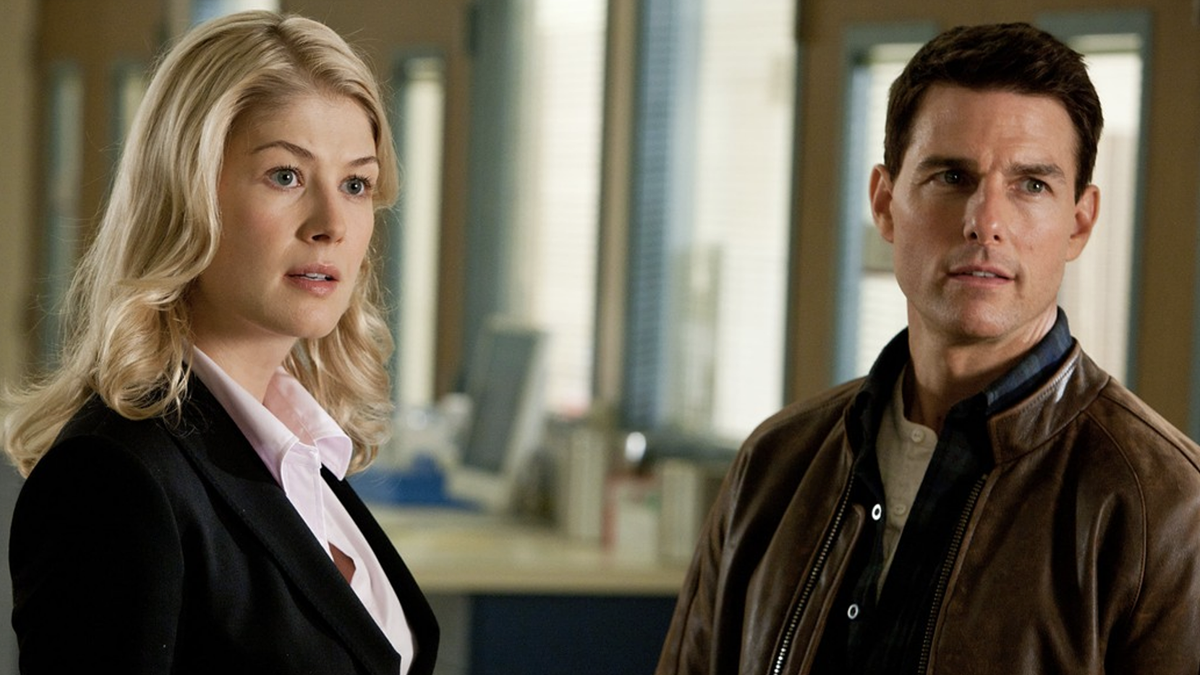 When you think about it, it really is amazing the career that Tom Cruise has had and, most likely, will continue to have.  Regardless of your views regarding Scientology, you’ve got to admit that the guy is, literally, the epitome of a movie star.  Looking at some of Hollywood’s other legends, Cruise is right up there with the best of them: Spencer Tracy, John Wayne, Paul Newman and Jack Nicholson to name a few – Cruise holds his own with the best of them.  One thing that has eluded Cruise is an Academy Award.  Though he’s been nominated a trio of times (Born on the Fourth of July, Jerry Maguire and Magnolia) he’s yet to walk away with the statue.  But Cruise is probably one of the most influential people in Hollywood (if not the world) and I doubt he’s losing too much sleep over his “losses.”  Truthfully when Cruise wants something done, movie wise, he gets it done.  His successes have given him the opportunity to take some risks in his more recent years and even old and “tired” franchises like Mission: Impossible are still fresh and profitable with Cruise calling the shots. Moving onto the film in question we find Cruise as the self-titled Jack Reacher, someone with 17 novels to his credit by author Lee Child.  I know I was wondering, but who is Jack Reacher?

When five people are shot and killed in a very professional manner, it seems that it was just one of those things that happened.  But after a clue is found and a suspect arrested, James Barr (Joseph Sikora) is arrested in what looks to be an open and shut case.  But if that were the case, Jack Reacher would be 15 minutes long.  So of course, there’s more.  Barr asks for one person: Jack Reacher (Tom Cruise).  And wouldn’t you know it, the man himself shows up in the nick of time.  Reacher, a man living off the grid with seemingly no history whatsoever attempts to connect the dots and is convinced there’s more to the story than meets they eye.  Is there?  Of course.  Working alongside the District Attorney’s (Richard Jenkins) daughter, Helen (Rosamund Pike) the two stumble upon a series of clues that leads them to believe that perhaps these shootings weren’t so arbitrary after all.  As they delve further, there’s corruption and deceit and they uncover an even more sinister plot.  Can Jack Reacher, a man of many talents, solve this mystery or will he die trying?

When the ending credits rolled, I found myself somewhat scratching my head. Not because it wasn’t a good movie and not because I didn’t understand it, but it just didn’t feel like a Tom Cruise movie to me.  Maybe as Cruise gets older, he does’t need his films to be flashy.  Jack Reacher works on a very deliberate pace and that makes the movie click.  I’ve read other reviews where they call this film a “thinking man’s movie.” Ok, though that seems a bit pretentious as a writer, but I can see the analogy.  Before this film I’d never head of Jack Reacher or realized that there were over a dozen novels that bore his name, but the way they’re set up (he’s a nomad of sorts), this can take place anywhere (this one took place in Pittsburgh).  And given the critical praise that’s been lauded on the film, we might just see a new franchise for Mr. Cruise. Fans of Tom Cruise will no doubt want to check this out, but amidst the fodder of other “murder mystery” movies, give this one a chance – you just might enjoy it like I did.

Having just recently re-watched the Blu-ray, I had some images fresh in my mind when it came to this film. And looking at it again in 4K, I had a good basis of comparison. The 2.40:1 HEVC 4K image simply has no flaws.  Detail is amazing, even being able to tell the writing on a quarter which actually holds significance in the plot.  Colors are bright and vivid, the outdoor images pop and the interior images show no flaws whatsoever.  The print is pristine and contains a fine layer of grain throughout to give it a more “gritty” look, but make no mistake – this is one outstanding transfer.

I guess if you’re a studio executive at Paramount your mantra must be “If it ain’t broke, then don’t fix it.” Like the Mission: Impossible films, there’s really no reason and/or excuse that this shouldn’t contain a Dolby Atmos mix, but all my whining won’t fix anything. And with that said, vocals are strong and clear, Cruise’s deep voice can be heard with the utmost clarity.  I think what really surprised me the most was how active the surrounds were.  In nearly every scene they’re humming or chirping away offering some sort of supporting audio benefit.  The front spectrum absorbs the majority of the sound field, though and it makes for a very spacious mix that’s satisfying to say the least.  Gun shots, car chases and oh so many bullets fired add to a very active and robust soundtrack that’s sure to please.

The supplements are the same here as they were with the previously-released Blu-ray (also included in the set, of course). So with that said…

There’s no shortage of source material if there are to be more Jack Reacher movies. I thoroughly enjoyed this one (despite what the third paragraph of my review says) and have watched it a few times since its arrival on home video. The second one left a little to be desired. But this is a “Tom Cruise” movie and if he wants to do another one, it’ll get made. This 4K version offers a slight uptick in video quality while retaining all of the elements of the original Blu-ray.